A New report by the Institute for Policy Studies found 51 of the nation's 100 biggest low-wage employers — including Tyson Foods, Coca-Cola, Chipotle and YUM Brands — used numerous tactics to boost executive pay in 2020 while offering their workers few safeguards against the pandemic and resulting economic meltdown. 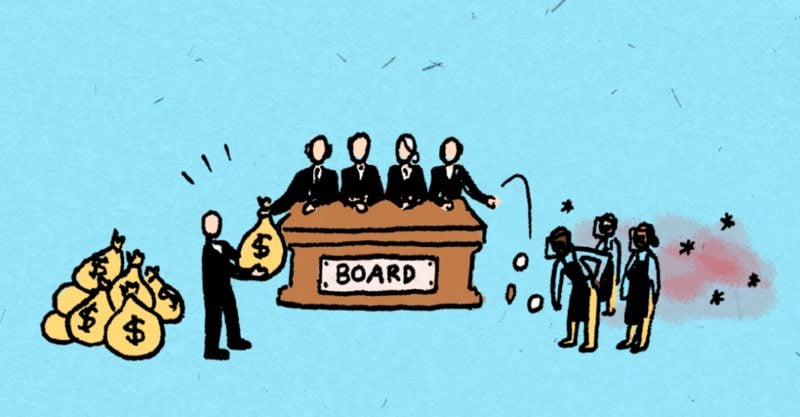 Dozens of the largest low-wage employers in the U.S. manipulated their own rules during the coronavirus pandemic to hand wealthy CEOs substantial raises while their vulnerable frontline workers struggled to get by with inadequate paychecks, meager benefits, and flimsy on-the-job protections.

That’s according to a new report released Tuesday by the Institute for Policy Studies, which found that 51 of the nation’s 100 biggest low-wage employers — including Tyson Foods, Coca-Cola, Chipotle and YUM Brands — used numerous tactics to boost executive pay in 2020 while offering their workers few safeguards against the pandemic and resulting economic meltdown.

For example, the board of Chipotle — a company notorious for violating worker safety and health regulations — inflated CEO Brian Niccol’s total compensation to $38 million in 2020 by “toss[ing] out the company’s poor financial results from the peak shutdown period and exclud[ing] COVID-related costs, a bit of financial magic that artificially boosted Chipotle’s operating income and helped give Niccola 136% raise.”

At the companies that altered their rules to reward top executives amid the deadly pandemic, CEO pay averaged $15.3 million in 2020, up 29% from 2019. By contrast, the report found that median worker pay at those companies fell by 2% to an average of $28,187.

“The 100 S&P 500 corporations we analyzed all paid median compensation under $50,000 in 2020,” the analysis notes. “Some did offer frontline employees paid leave and small pay increases during the pandemic, usually around $2 per hour, but in nearly all cases this modest extra COVID-19 support was only temporary. The real largesse flowed only to C-suites.”

NEW: During the pandemic, 51 of the country’s 100 largest low-wage employers bent their own rules to give CEOs raises.

Sarah Anderson, director of the IPS Global Economy Project and lead author of the report, said in a statement that “it’s time for public policy to shift corporate America away from a business model that creates prosperity for a few at the top and precarity for so many of the rest of us.”

“By inflating executive compensation while their workers struggled during a pandemic,” Anderson added, “corporate boards have strengthened the case for tax penalties on huge CEO-worker pay gaps.”

The report offers several recommendations for reining in massive and growing CEO-worker pay gaps, including passage of the Tax Excessive CEO Pay Act of 2021, legislation introduced by Sen. Bernie Sanders (I-Vt.) in March.

“As millions of families struggle to keep food on the table during a global pandemic and economic crisis, it is more important than ever that we close the CEO-worker pay gap and ensure that companies pay their workers the wages they deserve,” Rep. Barbara Lee (D-Calif.), a co-sponsor of the bill, said in a statement.

In a Tuesday blog post, Anderson noted that the measure “would generate an estimated $150 billion over 10 years that could be used to create good jobs and meet human needs.”