Elon Musk, Jeff Bezos and Mark Zuckerberg topped the list of the 15 billionaires with the greatest growth in absolute wealth since pandemic lockdowns began in March 2020. 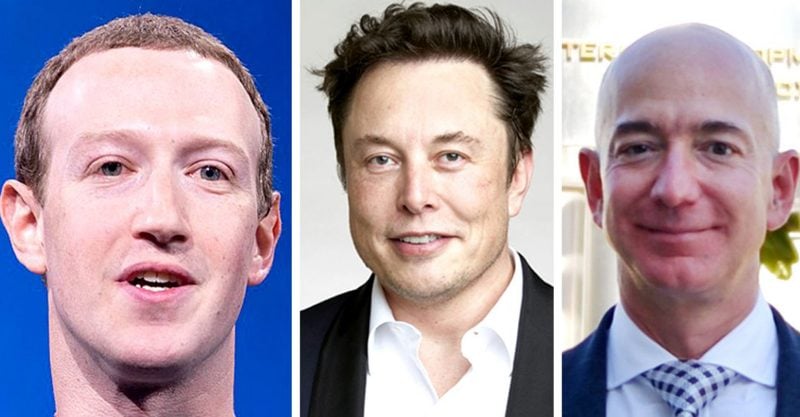 A year ago, the Institute for Policy Studies published “Billionaire Bonanza 2020: Wealth Windfalls, Tumbling Taxes and Pandemic Profiteers,” and began tracking billionaire wealth gains as unemployment surged. We teamed up with Americans for Tax Fairness (ATF) to track the wealth growth of America’s billionaires over the last year. This report summarizes the extraordinary growth in wealth of those now 657 billionaires based on real-time data from Forbes on March 18.

Here are highlights from the last 12 months of billionaire wealth growth:

The 10 biggest “Pandemic Profiteers” saw the greatest percentage increase in their wealth — at least 300%. [See Table 2]

They mostly multiplied their fortunes in the world of online goods, services and entertainment, as forcibly homebound Americans shopped, invested and diverted themselves in isolation. They include the owners of ecommerce leaders Quicken Loans, Square, Carvana, and cryptocurrency exchange Coinbase; social media sites Snapchat and Twitter; online streaming platform Roku; and digital ad agency Trade Desk. Nineteen other billionaires experienced increases of over 200% while 48 others more than doubled their fortunes with 100% + gains.

Other notable billionaire wealth gains during the pandemic

Of 17 industry categories, billionaires in the technology industry had the greatest collective wealth growth — $564 billion, or nearly 68%. [See Table 3]

They were worth $1.4 trillion on March 18, 2021, or one-third of the billionaires’ total. The titans of Wall Street — the finance & investment industries — saw their wealth grow by $226 billion — a nearly 37% increase. Automotive industry billionaires had the biggest percentage point increase in wealth — 317% based on an increase in wealth of $172 billion. That was largely driven by the extraordinary rise in Elon Musk’s wealth — $137.5 billion or 559%.

All but three states saw the wealth of their billionaire residents increase. [See Table 4]

Topping the list in total wealth growth are California at $551 billion, Washington at $134.6 billion, and New York at $116.4 billion. The top three states with the greatest percentage increase in wealth are Michigan at 164%, Arizona at 110%, and Hawaii at 107%.

Billionaire wealth growth is calculated between March 18, 2020 and March 18, 2021, based on Forbes data compiled in this report by ATF and IPS. March 18 is used as the unofficial beginning of the crisis because by then most federal and state economic restrictions responding to the virus were in place. March 18 was also the date that Forbes picked to measure billionaire wealth for the 2020 edition of its annual billionaires’ report, which provided a baseline that ATF and IPS compare periodically with real-time data from the Forbes website. PolitiFact has favorably reviewed this methodology. 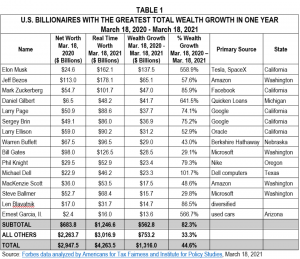 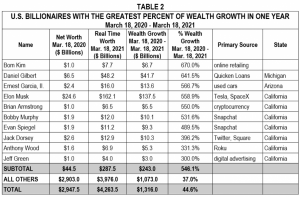 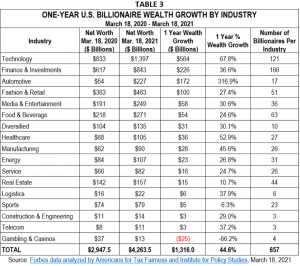 Chuck Collins is a senior scholar at the Institute for Policy Studies where he co-edits Inequality.org, and is author of the new book, "Born on Third Base: A One% er Makes the Case for Tackling Inequality, Bringing Wealth Home, and Committing to the Common Good."