A federally funded study released Tuesday reported a “positive association” between “vaccine-related aluminum exposure” and “persistent asthma” in children 24-59 months old, but the study’s authors were careful to not suggest a causal relationship. 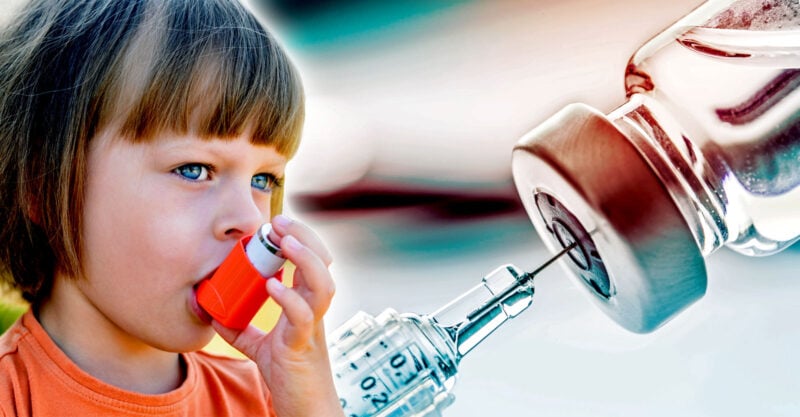 Overall, kids in the study who received 3 milligrams or more of vaccine-related aluminum had at least a 36% higher risk of developing persistent asthma than kids who got less than 3, the study’s lead author, Dr. Matthew F. Daley, told The Associated Press.

Daley was quick to urge caution in the interpretation of the results, telling STAT, “I’m still going to advocate for vaccines as strongly as I did before we had these findings.”

The study was published in the medical journal Academic Pediatrics. In addition to Daley, the authors included Dr. Frank DeStefano and other current and former Centers for Disease Control and Prevention (CDC) staff.

The authors were careful to not suggest a causal relationship between vaccine-related aluminum and asthma and noted that “additional investigation of this hypothesis appears warranted.”

According to the study authors, “Aluminum is integral to many vaccines, enhancing immunogenicity and effectiveness. Aluminum adjuvants have a well-established safety profile, and are used in many vaccines given in early childhood.”

The CDC undertook the study in response to a call in 2013 from the Institute of Medicine — now known as the National Academy of Medicine — for more federal research into the safety of childhood vaccines, including their use of aluminum.

“I find this very interesting and there are some concessions in the paper that I would have never believed that the CDC would make: asthma correlated with aluminum exposure in both children with eczema and children without eczema.”

Hooker also noted the CDC never did a comparison study with children who weren’t exposed to aluminum at all in their vaccines.

“A true comparison should be [done] between the maximum aluminum exposure at 2 years of age (which is about 4 mg total injected aluminum adjuvant) and a zero exposure group.”

“In the paper I did with Neil Miller (SAGE Open Medicine, 2020), we saw an odds ratio of 4.49 (statistically significant) for asthma in vaccinated children versus unvaccinated children. This was limited to vaccines in the first year of life.

“The CDC seems to be confirming my results here.”

Hooker also pointed out that the CDC also ran a statistical analysis of the data, called a “fully adjusted” model, in which the agency did not see a significant relationship between vaccine-related aluminum exposure and persistent asthma in children.

“My guess is that they’ll use the insignificant result to sidestep any further discussion on aluminum adjuvants in infant vaccines,” he said. “That is their method of choice and has been in the past.”

Christopher Exley, Ph.D., an expert on aluminum toxicity, agreed the study will likely not result in altering the use of aluminum adjuvants in vaccines.

Exley, who wrote a book on the topic, conducted many studies while a professor of bioinorganic chemistry at Keele University in the U.K. and writes a Substack newsletter on the toxicity of aluminum.

“Anyone reading this study should hang fire on thinking that this is a change in thinking concerning vaccines and their safety,” Exley told The Defender.

“It is a classic aluminum industry study appearing to surrender some possible toxicity of aluminum (in vaccines) while actually delivering multiple messages signaling the safety of aluminum in general.”

“The idea is to concede the smallest possible ground on aluminum toxicity and at the same time reinforcing what they want readers to think by citing multiple papers by stooges and those working directly for the aluminum industry — a classic example being where the authors look to reinforce that ingested aluminum is not a health issue in infants.”

Dr. Paul Offit, a member of the U.S. Food and Drug Administration’s vaccine advisory panel, told The Associated Press he was worried the study will needlessly scare some families away from proven vaccines.

“That’s an amazing bit of science denialism by Offit, who misleads the public continuously with tropes like ‘aluminum is the 3rd most common element in the Earth’s crust’ (um, yes, bonded to silica as bauxite, unavailable to any living organism, and not available anywhere until the latter half of the 19th C), and ‘you get more aluminum from food and water and anything made with water than you’d ever get from a vaccine’ (this we showed to be incorrect once absorption rates are considered).”

What the authors did

The authors of the observational study examined health data from 326,991 children born between the start of 2008 and the end of 2014, who received care at seven sites across the U.S. that participate in the Vaccine Safety Datalink, a network of health institutions that partner with the CDC to study vaccine safety.

The authors divided the children into two groups — those who had eczema by 12 months of age and those who did not, since children with eczema might be predisposed to develop asthma at a higher rate than children who don’t have eczema, regardless of how much exposure either group had to aluminum in vaccines.

“If there’s any relationship between aluminum and asthma, it could look different in kids with eczema than kids without eczema,” Daley told STAT.

The authors then examined data on how many vaccinations each child received before they turned 2 and used those data to estimate each child’s exposure to aluminum.

Finally, they looked at which children had developed persistent asthma between the ages of 2 and 5, defined by the authors as “one inpatient or 2 outpatient asthma encounters, and ≥ 2 long-term asthma control medication dispenses.”

The authors found “a positive association between cumulative vaccine-associated aluminum before age 24 months and persistent asthma at age 24 through 59 months among children with and without eczema.”

CDC sticks to ‘aluminum in vaccines is safe’ narrative

The CDC says on its Vaccine Safety website that adjuvants — such as aluminum salts — have been “used safely in vaccines for decades.”

The study provided further evidence of that “theoretical possibility” — which is inconvenient for the CDC to acknowledge.

But Dr. Sarah Long, professor of pediatrics at the Drexel University College of Medicine, told AP she thought the CDC did the right thing in publishing the study results.

“I believe in complete transparency,” she said. “If you’ve asked a question and here spent our (taxpayer) money to (investigate) that question, I think the results should be aired in all of its warts and glory.”

The CDC told STAT that an increase in asthma among young children predated the addition of aluminum to vaccines, which occurred in 1991.

According to data from the CDC’s National Health Interview Survey, the increase in children’s asthma was first observed in 1980.

Also, the CDC pointed out that many factors that couldn’t be measured in this study might increase a child’s risk of developing asthma.

“We hope that additional studies can quickly provide more clarity, but at least from the national trend data, it appears that addition of aluminum-adjuvanted vaccines do not account for the overall trends that we see,” the agency told Stat.