Alex Berenson tells RFK, Jr.: ‘I Can Now Bring a Claim Directly Against the White House’

In a recent episode of “RFK Jr. The Defender Podcast,” former New York Times reporter Alex Berenson discussed his big legal win in his lawsuit against Twitter and why he’s now in a good position to sue the White House for censoring him for asking questions about COVID-19 vaccines. 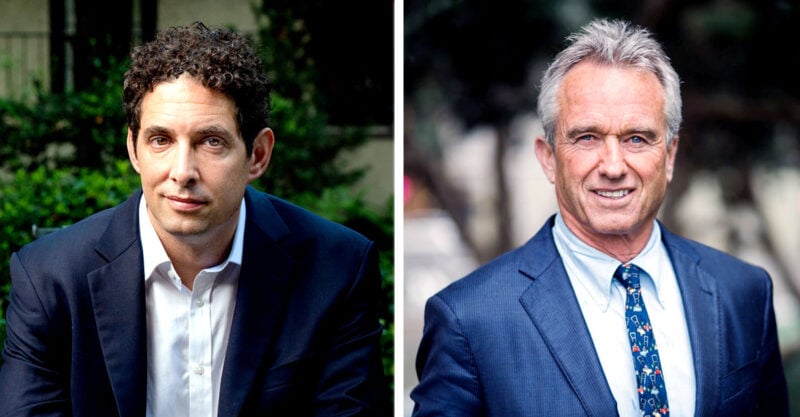 Alex Berenson didn’t initially have a strong negative feeling about the COVID-19 vaccines — but that changed after he saw the lack of safety and efficacy testing done on them.

When Berenson — a former New York Times reporter and the author of 13 novels — started raising questions about the vaccines in his Twitter posts, he soon found himself targeted by the Biden administration as a source of “disinformation.”

In a recent episode of “RFK Jr. The Defender Podcast,” Berenson told Robert F. Kennedy, Jr., how those questions led to Twitter suspending his account, to Berenson filing a lawsuit against the social media platform, to his latest big legal win and why he believes he’s now in a good position to sue the Biden administration for censoring his questions.

“I had covered the drug industry for a long time, so I was pretty familiar with the games that they played — especially in clinical trial design and testing,” Berenson told Kennedy. “I pretty rapidly came to the conclusion that the vaccines really hadn’t been very well tested, despite the size of the clinical trials.”

In July 2021, Twitter locked Berenson out of his account a few hours after President Biden said the social media companies were “killing people” by allowing vaccine skeptics to speak.

So in December 2021, Berenson sued Twitter in federal court, claiming the company had made a breach of contract because it previously assured him that he was doing nothing wrong according to their rules and that everything he said on their platform had been accurate.

Berenson also argued that Twitter had acted as a state actor by allowing the federal government to deputize them in censoring him.

“State actor,” is “a term of art,” Kennedy said, used to describe what happens when a state or federal official orders a privately-owned platform to censor people.

Berenson was reinstated on Twitter in July as part of the settlement of the lawsuit.

Most importantly, Berenson said, the judge’s ruling on the case was a “big win” for him because it allowed Berenson’s team to proceed with discovery — meaning under penalty of law, Twitter had to hand over all documents relevant to his case.

“So basically, I had the right to find out whether Twitter had been talking to other third parties,” he explained.

The internal Twitter communications obtained through discovery revealed that the White House had specifically targeted him in its private meeting with Twitter.

“I can now bring a claim directly against the White House,” Berenson told Kennedy,  “against people who were in the White House at that time — for trying to abridge my free speech rights.”

Kennedy compared experiences with Berenson by mentioning lawsuits related to the same censorship issues, including one against Elizabeth Warren who asked Amazon to stop selling a book by Dr. Joseph Mercola about the pandemic. Kennedy wrote the forward to the book.

Berenson and Kennedy discussed censorship on other topics — including the war in Ukraine — and the nature of the First Amendment.

They also discussed whether the U.S. and other countries might follow Denmark’s lead in suspending its national COVID-19 vaccination program. “I think other European countries will follow the Danes,” said Berenson.

He and Kennedy agreed that the Danes are “pretty data-driven.”

“They’re smart,” Berenson said. “They have a comprehensive national health insurance system so they know what’s happening in the country.”