After The Atlantic attacked him for raising questions about COVID vaccines, former New York Times reporter Alex Berenson told Fox News commentator Tucker Carlson we have to be able to have a real conversation about vaccines and the response to the pandemic. 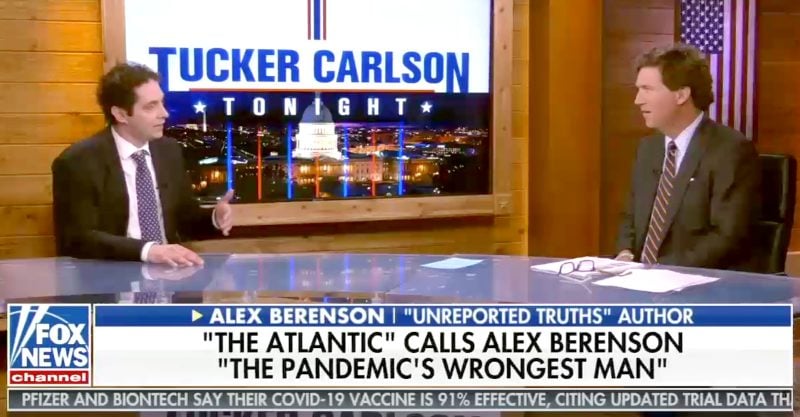 Alex Berenson says the April 1 cover story about him in The Atlantic magazine, missed the point.

In the interview below on last night’s Tucker Carlson Tonight show, Berenson told the Fox News commentator that if you want to talk about the pros and cons of COVID vaccines — whether they’re working as hoped, how long immunity lasts, whether people are having severe side effects — “we can have a conversation about that.”

“But the public health establishment and the rest of the media don’t want to have these conversations,” Berenson said.

Instead, Berenson said, they’re “caught in a web of a story that doesn’t make sense,” where we’re told the vaccines are perfect, but you still have to wear masks and stay away from each other.

“When you pile the lies, the misstatements, the overstatements on top of each other, the story just doesn’t make sense,” Berenson said.

The former New York Times reporter and author of 12 novels and two nonfiction books, says his arguments all come out of clinical trial data, scientific studies and real-life accounts.

“Because I’m not a conspiracy theorist [health officials and media] hate me more,” he told Carlson. Berenson’s “Unreported Truths About COVID-19 and Lockdowns” booklet was censored by Amazon.

Berenson said he’s not going to stop asking questions. He’d love to go on CNN or MSNBC or anywhere else to ask those questions.