Wisconsin Healthcare Workers Who Had Religious, Medical Exemptions Must Get Novavax COVID Shot or Lose Job

A Wisconsin hospital this week said it is withdrawing medical and religious exemptions for some employees from the hospital’s COVID-19 vaccine mandate, giving those employees until Sept. 21 to get the Novavax vaccine. 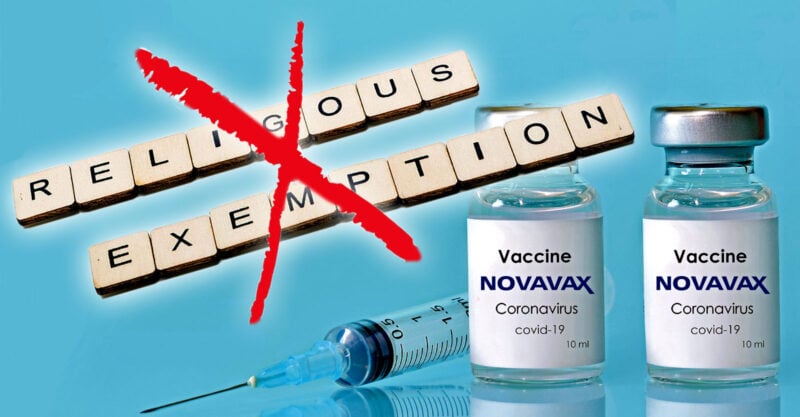 A Wisconsin hospital this week said it is withdrawing medical and religious exemptions for some employees from the hospital’s COVID-19 vaccine mandate, giving those employees until Sept. 21 to get the Novavax vaccine.

Froedtert & the Medical College of Wisconsin, which operates 11 hospitals and more than 45 health centers and clinics throughout the midwest and employs more than 2,000 physicians, in an email said the Novavax vaccine option “eliminates conflicts” for those who originally declined COVID-19 vaccination for religious or medical reasons.

The U.S. Food and Drug Administration in July granted Emergency Use Authorization of the Novavax COVID-19 vaccine for adults ages 18 and up. While the prior COVID-19 vaccines made by Pfizer, Moderna and Johnson & Johnson used fetal cell lines from unborn fetuses in various stages of development and testing, the Novavax vaccine is made differently and does not use human fetal cell lines.

Froedtert employees who don’t get the first Novavax dose by Sept. 21 will be terminated as Froedtert will consider them to have “voluntarily resigned,” the company said.

The hospital said in a statement:

“Froedtert Health requires staff and providers be fully vaccinated against COVID-19 as a federal requirement that is monitored for compliance. We join many other health systems around southeast Wisconsin and the U.S. that have made vaccination a condition of employment.

“The Novavax vaccination for COVID-19 is now available. This protein-based vaccination option eliminates conflicts for those staff with religious or medical exemptions caused by mRNA-based vaccines and other concerns.

“Since those staff are now eligible for a vaccination that does not conflict with their religious beliefs or medical situation, their exemption will expire. This affects a small percentage of staff with a vaccine exemption. Eligible staff continue to be exempt from a COVID-19 vaccine for religious and medical reasons.

“Froedtert Health respects the right of staff and providers to engage in activity protected by state and federal law.”

A Froedtert employee who spoke anonymously to WISN 12 News on Wednesday said Froedtert’s abrupt demand will have negative repercussions.

“Anyone in healthcare knows we’re very understaffed and overworked right now and this is just going to take away a lot of nurses from the bedside,” she said. “This will affect patient care and safety.”

Although according to Froedtert, as of October 2021 — their most recent count — nearly 99% of their employees had been vaccinated against COVID-19, the employee said she thought about 100 nurses would be affected.

“Now that we’re two, almost three years into this [COVID-19 pandemic] and we know more, we should be able to make our own educated decision,” she said.

“It’s my body, my temple. God is within us. If we’re uncomfortable, or not sure about something, then we shouldn’t do it.”

The employee said she’s presently unsure what she will do.

“I carry the health insurance for our family. I have a week to decide if I feel comfortable taking this vaccine otherwise I honestly don’t know. I don’t know if any other healthcare facilities in this area even take exemptions,” she said.

Froedtert officials said their recent exemption withdrawal complies with federal regulations that mandate all employees must be vaccinated against COVID-19 or have legitimate religious or medical exemptions.

Mark Goldstein, an employment lawyer, told WISN 12 News employees affected by the mandate could “attempt to recast their religious exemption as a more generalized claim.”

“Quick frankly,” he added, “some of it depends on how strident they are in that regard.”

The hospital’s requirement is that employees be fully vaccinated against COVID-19, but not that they have to get the new Omicron-specific booster shot made by Pfizer and Moderna.

As The Defender reported in late July when the Centers for Disease Control and Prevention (CDC) recommended the Novavax COVID-19 vaccine for adults age 18 and up, Operation Warp Speed in 2020 awarded Novavax — which like Moderna, had never brought a product to market before COVID-19 — a secret contract worth $1.6 billion (now being reported as $1.8 billion).

It was one of the largest taxpayer handouts channeled through Operation Warp Speed.

The media characterized the Novavax injection as a “game changer” in comparison to the mRNA and adenovirus-vectored gene therapy shots, claiming it should be “reassuring to those who are hesitant.”

In fact, according to the CDC’s advisors, the unvaccinated represent the “primary target population for Novavax.”

Some media outlets claimed Novavax — made with recombinant moth-cell-based nanoparticle technology, the problematic surfactant polysorbate 80 and a never-before-approved nanoparticulate adjuvant called Matrix-M — is “free of side effects.”

However, the day after the FDA issued its Novavax authorization, the European Medicines Agency (EMA) updated its product information for the Novavax shot to disclose “new” side effects.

The EMA’s list of side effects included “severe allergic reaction [anaphylaxis] and unusual or decreased feeling in the skin” (called paresthesia and hypoesthesia, respectively).

In addition, the EMA said it would assess myocarditis and pericarditis as Novavax side effects — safety signals that also were on display in the FDA’s briefing document on Novavax.

And in clinical trials, older adults who received the Novavax vaccine experienced an increased incidence of hypertension compared to those in the placebo group.

Not as ‘traditional’ as portrayed

The Novavax vaccine relies on a protein-based technology used for decades, leading some media outlets to portray it as a “traditional” vaccine compared with other COVID-19 vaccines that use newer technologies.

But according to Dr. Meryl Nass, an internist with a special interest in vaccine-induced illnesses, chronic fatigue syndrome and toxicology, the media’s portrayal of Novavax as a more traditional vaccine is not accurate.

Nass, a member of the Children’s Health Defense (CHD) scientific advisory committee, pointed out that the Novavax shot contains a novel adjuvant, Matrix-M, “so it is not really an old-fashioned shot.”

Nass raised safety concerns specific to the adjuvant, while others voiced concerns about Novavax being linked to heart inflammation and blood clots, and the fact that the vaccine was designed for use against the original Wuhan strain of SARS-CoV-2 — not the Omicron variants that are dominant today.

Because Novavax is a protein subunit vaccine, it uses just the spike protein as the antigen rather than the whole pathogen (an inactivated or attenuated virus). Using the whole pathogen would expose the host to the virus’ entire protein coat instead of just one protein.

Protein subunit vaccines are often less immunogenic (less likely to provoke the immune system) than vaccines that use whole pathogens as the antigen, and may not generate a strong enough immune response.

That’s why they require the use of an adjuvant — in this case, Matrix-M — in addition to the antigen to get a stronger immune response.

However, few adjuvants are both potent and non-toxic enough for clinical use.

The proposed primary series for Novavax is two intramuscular injections 21 days apart at the dose level of 5 µg of the recombinant spike protein and 50 µg of the Matrix-M adjuvant.

Matrix-M, originally called QS-21, was one of the saponins derived from Quillaja saponaria, which is the soap bark tree native to Chile.

Some reports point out that the Matrix-M adjuvant — unlike the polyethylene glycol (PEG) lipid used in mRNA vaccines — is not linked to anaphylaxis (a severe allergic reaction), making it more attractive to people who are allergic to PEG.

But according to Nass, while it’s true that Matrix-M — which is not found in any other vaccines in the U.S. — isn’t linked to anaphylaxis, it is linked to autoimmune diseases.

Nass voiced other safety concerns about Novavax technology, including the use of moth cells.

According to the University of Nebraska Medical Center, where Novavax Phase 3 clinical trials were conducted, the Novavax vaccine uses moth cells to create a nanotechnology version of the COVID-19 spike protein.

Nass said insect cells can be used to grow proteins rapidly. “There is one flu vaccine made the same way: Flublok,” Nass said. Flublok is one of two egg-free flu vaccines licensed for use in the U.S.

“How many insect and viral proteins or other molecules are being injected into you when you get the Novavax vaccine — which is a function of how purified the vaccine is —  is unknown,” Nass said.

The SARS-CoV-2 virus encodes 29 proteins, but Novavax — like Pfizer, Moderna and Johnson & Johnson — chose to target only the spike protein.

As previously reported in The Defender, it is not known if the spike protein itself is safe.

“We have known for a long time that the spike protein is a pathogenic protein,” said Byram Bridle, Ph.D., associate professor of viral immunology at the University of Guelph, Ontario. “It is a toxin. It can cause damage to our body if it gets into circulation.”

According to Brian Hooker, Ph.D., P.E., CHD’s chief scientific officer, “If you wanted to pick the most toxic protein, you know what represents the highest virulence, the highest amount of damage on the COVID-19 virus? You would pick the spike protein.”

The spike protein “has been consistently shown to create clotting issues in the blood,” Hooker said.