The Biden administration this week purchased $290 million worth of Nplate, a radiation sickness drug — with serious side effects — developed by drugmaker Amgen in partnership with several government agencies, including the National Institute of Allergy and Infectious Diseases, headed by Dr. Anthony Fauci. 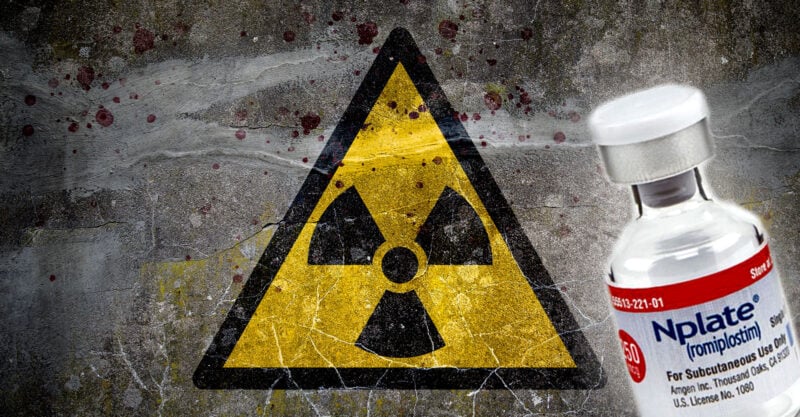 In what pharmaceutical industry publication Fierce Pharma called “a troubling sign of the times,” the Biden administration this week purchased $290 million in anti-radiation drugs.

In an Oct. 4 press release, the U.S. Department of Health and Human Services’ (HHS)  Administration for Strategic Preparedness and Response (ASPR) announced the purchase of Nplate, a drug used to treat acute radiation syndrome.

ASPR — the federal agency tasked with preparing for disasters and public health emergencies — said the purchase was made “as part of long-standing, ongoing efforts to be better prepared to save lives following radiological and nuclear emergencies.”

HHS did not clarify why it bolstered the government’s Nplate stockpile, other than describing it as “part of our ongoing work for preparedness and radiological security.”

Officials downplayed any connection to the Russia-Ukraine conflict, adding that the purchase “was not accelerated by the situation in Ukraine.”

However, two days after the announcement, amid growing tensions related to the conflict between Russia and Ukraine, President Biden said the risk of nuclear “Armageddon” is at its highest since the Cuban Missile Crisis in 1962.

The U.S. government in recent months has made several moves signaling a growing level of nuclear preparedness.

According to The Register, the investigation will work to “build a new understanding of the effects of low-dose radiation” through the use of technologies such as artificial intelligence, machine learning, biomarker discovery and analytical biography.

Earlier this summer, New York City authorities raised eyebrows with the release of a 90-second nuclear preparedness public service announcement (PSA), which the New York Times described as “bizarre” and as “well watched,” but “not well received.”

At the time, NPR reported that New York City’s emergency management department “wants residents to be prepared if [a nuclear attack] does occur,” but that the PSA left many of the city’s residents “confused.”

Outside the U.S., countries neighboring Ukraine, such as Poland, reportedly began distributing iodine tablets in response to the threat of nuclear fallout related to the Russia-Ukraine conflict as a result of shelling around the Zaporizhzhia nuclear power plant in Ukraine.

Developed under Project BioShield, with funding from numerous government agencies

Nplate is the trade name for the drug romiplostim, approved by the U.S. Food and Drug Administration (FDA) in January 2021 for the treatment of blood cell injuries that result from acute radiation syndrome.

The drug is an artificial protein that promotes the production of platelets — or blood-clotting cells — in the human body.

The drug first received FDA approval in 2008, for the treatment of immune thrombocytopenia, an autoimmune disorder that causes serious bleeding.

Amgen, the drug’s manufacturer, developed Nplate in conjunction with the Biomedical Advanced Research and Development Authority, or BARDA, under the auspices of Project BioShield, signed into law in July 2004 by then-president George W. Bush.

Project BioShield, which incentivizes private companies to develop vaccines and countermeasures for biological, chemical, nuclear and radiological threats, provided funding for the latest $290 million purchase by the HHS.

BARDA — another arm of HHS — garnered attention in recent years for its extensive deals with COVID-19 vaccine manufacturers and for its promotion of COVID-19 countermeasures.

In 2020, BARDA promised Moderna up to $483 million to “shepherd” its COVID-19 vaccine through the FDA approval process.

The National Institute of Allergy and Infectious Diseases (NIAID) — headed by Dr. Anthony Fauci — also contributed to the development of Nplate.

For instance, during an April 2018 oversight hearing of the House Appropriations Subcommittee on Labor, Health and Human Services, and Education, Fauci described NIAID’s involvement in the development and promotion of “radiation/nuclear countermeasure candidates,” including Nplate, for FDA approval under the Animal Rule.

In the case of Nplate, drugs.com states that the effectiveness of the drug for the purposes of treating radiation exposure “was only studied in animals, because it could not be studied in people.”

Also according to drugs.com, Nplate also is associated with several serious potential side effects, including the increased risk of a blood clot or stroke, an increased risk of developing blood cancers and “harmful effects on your bone marrow that may result in serious blood cell disorders.”

The site states that it is “unknown” if Nplate will cause harm to unborn babies.

Amgen, based in Thousand Oaks, California, describes itself as “A worldwide pioneer in biotechnology.”

The company’s board of directors includes members from The Aerospace Corporation, the David H. Koch Institute for Integrative Cancer Research, Northrop Grumman, Phillips 66, the University of California and Walmart.