Reignite Democracy Australia and Children’s Health Defense are calling on leaders throughout the world on Dec. 4 to participate in “SOS from Australia,” an event aimed at denouncing the undemocratic restrictions imposed on the citizens of Australia. 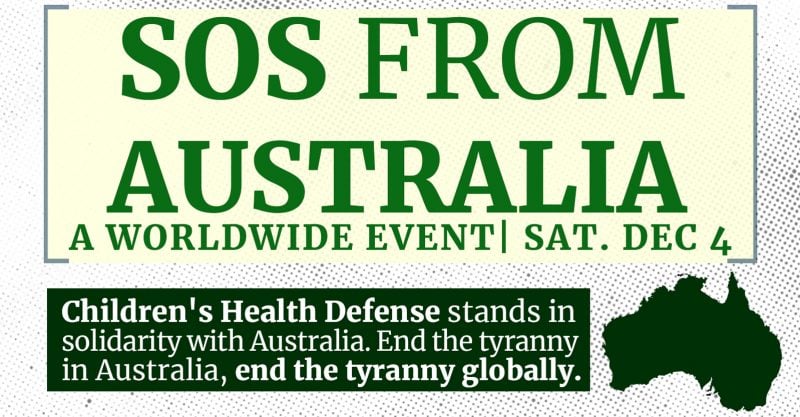 Reignite Democracy Australia and Children’s Health Defense (CHD) are calling on leaders throughout the world on Dec. 4 to participate in “SOS from Australia,” an event aimed at denouncing the undemocratic restrictions imposed on the citizens of Australia.

CHD invites other organizations and individuals worldwide to show their support for Australians by showing up at the nearest Australian consulate or embassy and making a “Declaration of Solidarity.”

Watch this plea for help:

Participants in the Dec. 4 event will demand the Australian government create reasonable options for International travel and put an end to lockdowns, mandatory vaccinations and exorbitant fines for business and individuals related to “COVID-safe” measures.

“Our new Australian chapter, launching this month, will provide much needed information, advocacy and hope for all Australians during these unprecedented times,” said Karen McDonough, CHD chapter coordinator.

Australia has been home to some of the most oppressive COVID restrictions in the world. In late October, Melbourne celebrated the end of the world’s longest lockdown. For 262 days, its citizens were subject to a curfew between 9 p.m. and 5 a.m., and were not permitted to travel more than three miles from home.

Under Melbourne’s “zero-tolerance” policy, residents were permitted to leave home only to shop for essentials, get vaccinated, exercise for a maximum of two hours, attend “authorized” work or education, provide caregiving or seek medical help.

Australians now find themselves at the mercy of strict regulations and a new wave of draconian rules. Fears over the new Omicron variant have brought new travel bans and quarantine orders as the country is again on alert.

According to a Reignite Democracy Australia press release:

“Australians are facing unprecedented Government actions that have robbed us of our fundamental rights and freedoms – all enforced with extreme aggression by the Police Force. Many Australians no longer feel safe in our once-democratic country.”

On Nov. 20, based on nine new COVID cases in Binjari, Michael Gunner, chief minister of the Northern Territories, initiated a “hard lockdown” allowing residents to leave their homes only for medical treatment, emergencies or if required by law.

Dozens of indigenous Australians were taken to quarantine camps. A number of aboriginal leaders allege military personnel and police officers are forcibly vaccinating people in their communities.

In one video circulating on social media, aboriginal elder June Mills put out a call for help claiming “children are being held and vaccinated against their will.” Mills called the actions “an act of war against our people.”

Another video shows two police officers shoving a person described as a “indigenous elder” into the back of a truck while onlookers shout, “This is cultural genocide!”

In Victoria, Premier Dan Andrews proposed bills that would give him the authority to impose $90,000 fines on individuals who violate public health orders, and $455,000 fines on non-compliant businesses.

The proposed legislation also would give law enforcement authority to imprison dissenters for up to two years.

One Parliament member is speaking out. Queensland MP George Robert Christensen called on citizens to rise up against Australia’s draconian COVID measures.

In a recent speech, he said:

“In 21st century, Australia state premiers are racing down that familiar path trying to out-tyrant each other, drunk on power, setting up their own biosecurity police states complete with medical apartheid. Sadly, we’ve enabled it refusing to rein them in – worse, supplying the Australian immunization register data that underpins this medical apartheid.

“The solution is a rediscovery of human dignity, along with — and I don’t say this lightly — civil disobedience.”

CHD asks global citizens to join Australians as they defend their basic freedoms. Together we are fighting for the future of all of our children.

CHD is collecting information on events around the world and will post updates at WorldWideWalkouts. If you don’t live near one of these event cities, please check the list provided for phone numbers in order to make phone calls to stand in solidarity with Australia.