“Profiles of the Vaccine-Injured: ‘A Lifetime Price to Pay’” — a new book by Children’s Health Defense with a foreword by Robert F. Kennedy, Jr. — exposes how the soft-pedaling of vaccine risks is a dangerous — and expensive — lie. 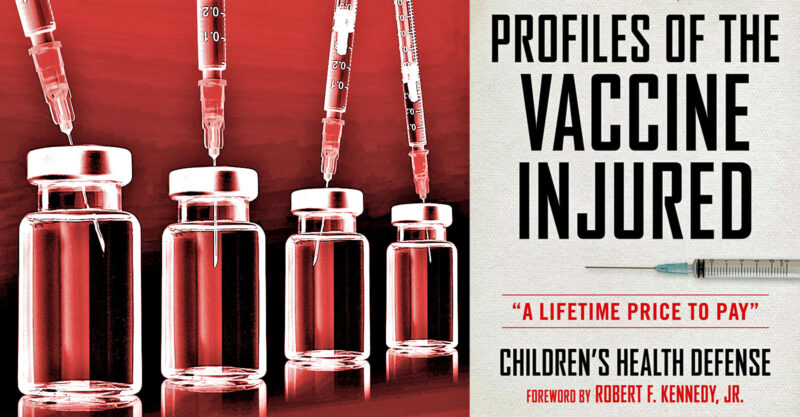 Governments, public health experts and the media have so often repeated the false claims that vaccine injuries are “rare,” “almost nonmeasurable” or “one in a million,” that many people believe them — until they experience an injury.

The controlled messaging — together with censorship of vaccine injury stories in the public square and indecent gaslighting of injured individuals who speak up — have thrown a cloak of invisibility over vaccination’s potential to ruin health and torpedo financial security.

“Profiles of the Vaccine-Injured: ‘A Lifetime Price to Pay’” — a new book by Children’s Health Defense (CHD) with a foreword by Robert F. Kennedy, Jr. — exposes the official soft-pedaling of vaccine risks as a dangerous lie.

As the book takes pains to explain, vaccine injuries are common, not rare. They are “equal opportunity,” affecting all demographic groups, including young and old, rich and poor.

Vaccine injuries are, more often than not, profoundly life-changing, and they have significant ripple effects on family members.

And, with the advent of experimental COVID-19 injections, they are occurring on a scale never before seen.

Because nearly all vaccines, whether fully licensed or authorized for emergency use, are liability-free, in most cases, families are left holding the bag for the medical, educational, caregiver and other expenses that a serious vaccine injury generates — costs that have the potential to bankrupt not only individual households but the nation.

The heart of the book resides in nine vaccine injury stories, told by mothers of injured children and by persons injured as adults.

Their injuries, at ages ranging from 12 months to 49 years, followed receipt of “routine” childhood vaccines, travel vaccines or COVID-19 shots.

The interviews convey in vivid detail what it’s like to live with conditions such as severe autism, chronic pain or immune systems gone haywire — and, in one case, describe the tragic loss of a promising teenager’s life shortly after receiving a shot.

The nine individuals also describe experiences with gaslighting and obfuscation by the medical profession, strained family relationships and interrupted or curtailed careers, along with immense regret for “the worst decision of their life.”

Equally importantly, they identify a theme that, while common, is perhaps one of the most underrecognized facts about vaccine injury: “When it comes to vaccine injuries, there’s no help legally or financially — you’re on your own.”

Although the two pieces of legislation that established vaccines’ liability-free status have been in place for years or decades — the 1986 National Childhood Vaccine Injury Act (for most licensed vaccines) and the 2005 Public Readiness and Emergency Preparedness (PREP) Act (for Emergency Use Authorization vaccines) — the laws and their financial ramifications remain unknown to large swaths of the public.

Just after the COVID-19 vaccine rollout, The Associated Press described the CICP as “an obscure program with a record of seldom paying claims,” and interviewed worried experts who admitted the program could “get overwhelmed very, very quickly.”

Instead of getting “overwhelmed,” Forbes noted that relatively few individuals had, by November 2021, applied to CICP for compensation for COVID-19 vaccine-related injuries or deaths — around 1,360 — but the financial magazine speculated that the low number might be because “people don’t know the special fund exists.”

By September 2022, the landscape had shifted, with nearly 9,000 CICP petitions filed, though the program’s fiscal year 2022 budget contained funds sufficient to compensate at most three applicants.

As Wayne Rohde, a long-time analyst of U.S. vaccine injury compensation statistics, stated in an analysis of the CICP, “Our government really does not want to compensate those who have been injured.”

In its introductory chapters, “Profiles of the Vaccine-Injured” also takes a comprehensive look at other sources of information on vaccine injuries, ranging from vaccine package inserts to published research.

Discussing the poor showing of U.S. children — and adults — in global health rankings, the book reiterates a point that CHD has emphasized in other books: namely, that vaccination must be considered a key “elephant in the room” linked to America’s chronic disease epidemics.

The recent forced release of data from the Centers for Disease Control and Prevention’s (CDC’s) V-safe app suggests that the COVID-19 injections are responsible for shocking numbers of debilitating symptoms, including severe pain as well as unprecedented rates of hospitalization and worse.

In fact, while Americans’ health disadvantage — which “begins at birth and extends across the life course” — had translated into plunging life expectancy even before the COVID-19 injections, premature deaths have become especially noticeable since the vaccines’ rollout.

Exposing the truth behind the vaccine safety myth, “Profiles of the Vaccine-Injured” is, as Kennedy writes in his foreword, ultimately a call to arms.

“When you are done weeping and tearing out your hair from fury, frustration and indignation, join Children’s Health Defense in doing something about it,” Kennedy wrote.