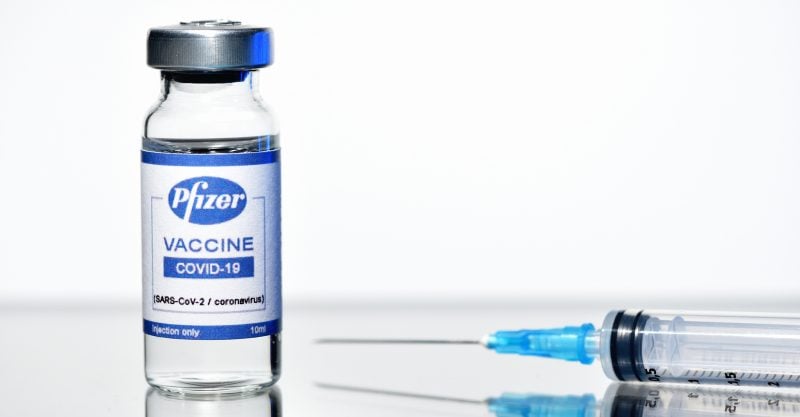 Two studies published Wednesday in the New England Journal of Medicine confirm any immune protection offered by two doses of Pfizer’s COVID vaccine drops off after roughly two months — although protection against severe disease, hospitalization and death remains strong, the authors of the studies said.

Antibodies were tested during the baseline period defined as four to 17 days after receipt of a second vaccine dose, and every four weeks thereafter over a six-month period.

The highest titers after receipt of the second vaccine dose were observed during days four  through 30, so this was defined as the peak period.

Because researchers could not perform neutralizing antibody assays in all study participants, they selected a subgroup that included higher proportions of persons with risk factors of interest, such as an age of 65 years or older and coexisting conditions.

Researchers also saw a substantial reduction in the IgG level each month, and a significant decrease in neutralizing antibody titers.

“Published work about many vaccines, such as those against measles, mumps and rubella, has shown a small decrease each year of 5% to 10% in the neutralizing antibody levels,” researchers wrote. “We found that a significant and rapid decrease in humoral response to the BNT162b2 [Pfizer/BioNTech] vaccine was observed within months after vaccination.”

Estimated effectiveness against SARS-CoV-2 infection was negligible for the first two  weeks after the first Pfizer dose, increased to 36.8% in the third week after the first dose, and reached its peak at 77.5% in the first month after the second dose.

Pfizer has consistently claimed the company’s own efficacy data demonstrate 95% efficacy against SARS-CoV-2, which was not observed in this study.

The authors of the Qatar study, Laith Abu-Raddad of Weill Cornell Medicine-Qatar and colleagues, wrote:

A Pfizer-funded study published Monday in The Lancet found the efficacy of the Pfizer/BioNTech COVID vaccine fell below 50% about six months after the second dose.

The study found Pfizer’s vaccine was 88% effective in the first month after full vaccination but dropped to 47% effectiveness at about six months.

The study also found the vaccine to be “highly effective” against the Delta variant, which was found to be more than 90% effective in the first months before dropping to 53% effective after four months.

Researchers determined the waning immunity had to do with the amount of time since an individual was given the second shot, rather than due to the highly infectious Delta strain, The Hill reported.

“Our results provide support for high effectiveness of [Pfizer-BioNTech COVID-19 vaccine] against hospital admissions up until around 6 months after being fully vaccinated, even in the face of widespread dissemination of the Delta variant,” the researchers wrote.

“Reduction in vaccine effectiveness against SARS-CoV-2 infections over time is probably primarily due to waning immunity with time rather than the Delta variant escaping vaccine protection,” they added.

For the study, researchers looked at the 3.4 million electronic records from the Kaiser Permanente Southern California (KPSC) healthcare system for patients ages 12 and up, and studied them from December 2020 to August.

Pfizer and its German partner, BioNTech, today asked the U.S. Food and Drug Administration (FDA) to authorize their COVID vaccine for emergency use for children 5 to 11 years old.

According to The Washington Post, an FDA advisory committee is scheduled to meet Oct. 26 to discuss Pfizer’s pediatric COVID vaccine.

According to Alex Berenson, former New York Times reporter and author of 12 novels and two nonfiction books — and currently author of the Substack publication “Unreported Truths” — said Prizer’s clinical data of its COVID vaccine for 5- to 11-year-olds showed no evidence of actual health benefit to the children who received it.

“In other words, what Pfizer demonstrated in its 2,300-patient child trial is that its mRNA doses can make your kids make spike proteins (and have side effects), Berenson said.

“Per Pfizer’s Sept. 20 press release announcing the trial’s results, the trial didn’t show the vaccine reduced hospitalizations (which are basically non-existent in healthy children) or even mild cases,” Berenson said.

Nowhere in Pfizer’s press release did it say the vaccine did anything to make kids stay healthier, Berenson explained. “But it did reveal side effects generally comparable to those observed in participants 16 to 25 years of age,” he said. “In other words, (sometimes severe) headaches, fatigue and fever.”

Maya Sen, a political scientist and professor at Harvard commented on the news with two words:

“It’s interesting to see people who all along have said that COVID isn’t that big of a deal for kids immediately pick up on the Pfizer research design as being supporting evidence of that,” Sen added.

Interesting to see people who all along have said that Covid isn’t that big of a deal for kids immediately pick up on the Pfizer research design as being supporting evidence of that. https://t.co/aLcPOffAq9

Serious cases are so rare in children that it’s extremely hard to do a trial with sufficient statistical power to tell if you are preventing them.

Zients, appearing Thursday on CNN, said the country has the supply to quickly distribute the shots once the FDA and Centers for Disease Control and Prevention approve it.

Zients said the Biden administration is working with states to make it easy for parents to immunize their children by setting up convenient times and places to administer the shots.