The Biden administration withdrew its COVID vaccine-or-test mandate for large employers, saying the administration recognized the Emergency Temporary Standard could not be revived after the U.S. Supreme Court blocked it earlier this month. 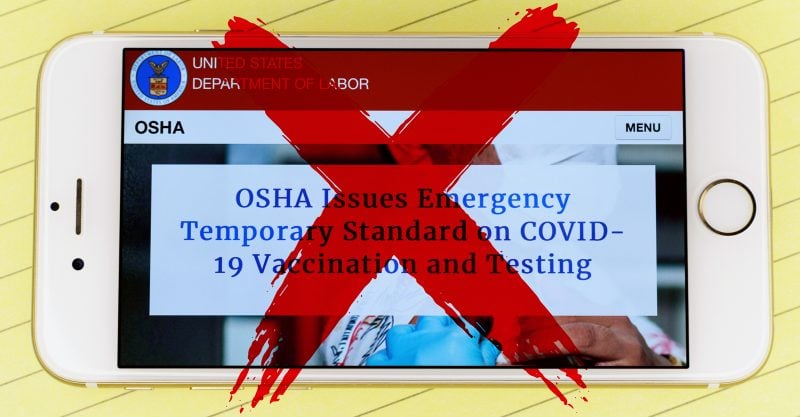 The Biden administration is withdrawing its COVID vaccine-or-test mandate for large employers, the U.S. Department of Labor announced today.

In pulling the rule, the department said it recognized the Emergency Temporary Standard (ETS) could not be revived after the U.S. Supreme Court blocked it earlier this month.

Instead, the Biden administration is working to set a permanent standard for the vaccine mandate based on the Supreme Court’s ruling, according to a notice provided to the court by the Occupational Safety and Health Administration (OSHA).

OSHA said in a press release:

“Although OSHA is withdrawing the vaccination and testing ETS as an enforceable emergency temporary standard, the agency is not withdrawing the ETS as a proposed rule. The agency is prioritizing its resources to focus on finalizing a permanent COVID-19 Healthcare Standard.”

OSHA could move a version of the vaccine-or-test rule through its rule-making process, but would still likely face legal challenges, according to David Michaels, a former OSHA administrator and professor at George Washington University.

The Labor Department’s decision to withdraw the rule means pending legal proceedings will be dropped. The case was on its way back to the 6th Circuit Court of Appeals to be heard on the merits, although the lower court most likely would have followed the Supreme Court’s lead, The New York Times reported.

Without OSHA’s vaccine mandate in effect, employers must follow state and local laws on COVID workplace safety. Some states have banned vaccine mandates for private employees, while other states, like New York, require them.

“OSHA continues to strongly encourage the vaccination of workers against the continuing dangers posed by Covid-19 in the workplace,” the Labor Department wrote in the notice of its withdrawal.

The Supreme Court’s decision reversed the lower court ruling, imposing a stay on the OSHA mandate.

The conservative majority expressed concerns over the implications of allowing OSHA to implement a widespread mandate without congressional authorization.

“Permitting OSHA to regulate the hazards of daily life — simply because most Americans have jobs and face those same risks while on the clock — would significantly expand OSHA’s regulatory authority without clear congressional authorization,” the opinion stated.

“Requiring the vaccination of 84 million Americans, selected simply because they work for employers with more than 100 employees, certainly falls in the latter category,” the opinion read.

The minority justices said OSHA’s mandate is comparable to a fire or sanitation regulation imposed by the agency, while the majority said a vaccine mandate is strikingly unlike the workplace regulations that OSHA has typically imposed as a vaccination “cannot be undone at the end of the workday.”

A majority of the Supreme Court’s justices concluded the applicants challenging OSHA’s mandate were likely to succeed in the merits of their claim and the secretary of labor lacked authority to impose the mandate, resulting in a stay while the case works its way through the 6th Circuit Court.

After the ruling, many companies were left scrambling to decide whether they should abandon the mandate or force their employees to be vaccinated while the lawsuit played out in the lower courts.

Starbucks was one of the first major retailers to backtrack on its plans to require workers to be vaccinated against COVID. Starbucks last week told its 228,000 employees at more than 9,000 U.S. coffee shops it would no longer require workers be fully vaccinated or submit to weekly COVID testing.

In a Jan. 18 memo to employees, Starbuck CEO John Culver said the company respects the court’s ruling and will comply even though it doesn’t align with the company’s beliefs.

A coalition of attorneys general from 27 states called on OSHA to rescind its ETS saying the agency lacked authority to issue a broad mandate.