Starbucks, Carhartt Take Opposite Stand on Vaccine Mandates — Both Take Heat From Consumers

The U.S. Supreme Court’s rejection of the Biden administration’s vaccine-or-test mandate for private businesses left companies like Starbucks and Carhartt scrambling to decide whether they should abandon the mandate or force their employees to be vaccinated. 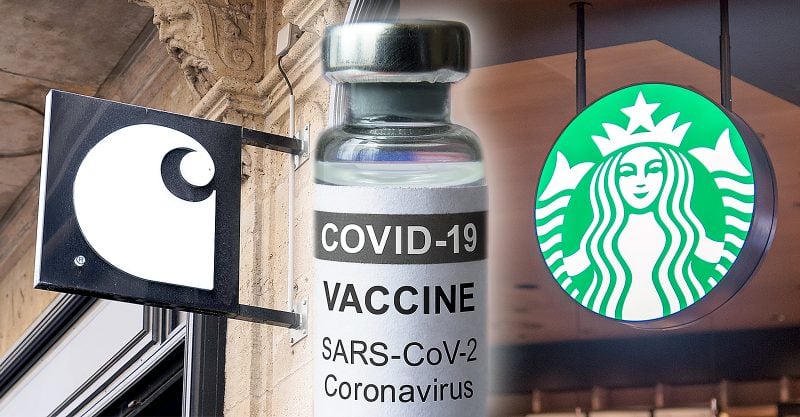 The U.S. Supreme Court’s Jan. 13 ruling striking down the Biden administration’s vaccine-or-test mandate for private businesses left many companies scrambling to decide whether they should abandon the mandate or force their employees to be vaccinated while the lawsuit plays out in the lower courts.

Meanwhile, a coalition of attorneys general from 27 states is calling on the Occupational Safety and Health Administration (OSHA) to rescind its Emergency Temporary Standard (ETS) because it lacks the authority to issue a broad vaccine mandate.

Starbucks was one of the first major retailers to backtrack on its plans to require workers to be vaccinated against COVID. Starbucks on Tuesday told its 228,000 employees at more than 9,000 U.S. coffee shops it would no longer require workers be fully vaccinated or submit to weekly COVID testing.

Tuesday’s announcement rescinded the company’s Jan. 3 statement that it would require all employees to comply with the vaccine-or-test requirement by Feb. 9. At the time, CEO John Culver said it was the responsibility of Starbucks’ leadership “to do whatever we can to help keep you safe and create the safest work environment possible.”

In Tuesday’s memo, Culver said the company respects the court’s ruling and will comply even though it doesn’t align with the company’s beliefs.

Starbucks is still encouraging employees to get vaccinated and boosted and offers two hours of paid time off for getting the shots.

Reggie Borges, spokesman for the company, said the vaccine mandate was not an independent company policy. “We knew OSHA was requiring it, the Supreme Court hadn’t ruled on it one way or the other and we needed to make sure our partners were supported and prepared to be in compliance,” he said.

According to The New York Times, the Supreme Court’s decision does not prohibit companies from enforcing their own vaccine rules.

This week, workwear company Carhartt became the latest company to enforce a vaccine mandate for employees despite the Supreme Court ruling. The move incited customer blowback across the nation.

On Jan. 14, Carhartt CEO Mark Valade announced in an email to staff the company’s vaccine mandate for its 3,000 U.S. employees would remain in place despite the Supreme Court’s decision. The company will allow for religious and medical exemptions, however.

“We put workplace safety at the very top of our priority list, and the Supreme Court’s recent ruling doesn’t impact that core value,” Valade wrote. “An unvaccinated workforce is both a people and business risk that our company is unwilling to take.”

The Carhartt brand is most famous for its rugged jackets and overalls, worn by construction workers, contractors and utility workers — or by politicians looking to boost their blue-collar credibility.

The announcements by Starbucks and Carhartt triggered calls for boycotts of both companies, with people from both sides of the debate either condemning or cheering the decisions.

After Starbucks announced it was dropping its vaccine requirements, the hashtag #BoycottStarbucks began trending on Twitter as users voiced their outrage over the change.

Some customers vowed to avoid Starbucks unless it required its workers get vaccinated, others vowed to go through the line twice per day.

People also took to social media calling for a boycott of Carhartt products.

Well @Carhartt has labelled the unvaccinated dangerous and implemented a vaccine mandate. Pretty rich from a company sustained by the ranchers, farmers, laborers, etc. who make this country great and celebrate her values of freedom and liberty.

Boycott Carhartt until they break.

State Rep. Anthony Sabatini (R-Fla.) tweeted a memo to Florida Gov. Ron DeSantis urging him to “eliminate any and all state agency business and contracts.”

Today I wrote a letter to @GovRonDeSantis urging him to eliminate any and all state agency business & contracts with the woke company @Carhartt—which recently announced that they will be firing all unvaccinated workers. Florida must fight back against woke corporate tyranny. pic.twitter.com/nqD3QUuY0Y

Amy Hellebuyck, a Carhartt spokesperson, said in a statement:

“Carhartt fully understands and respects the varying opinions on this topic, and we are aware some of our associates do not support this policy. However, we stand behind our decision because we believe vaccines are necessary to protect our workforce.”

Other companies, including CitiGroup and United Airlines, said they would continue to enforce the COVID vaccine mandate for employees, while large employers like General Electric and Boeing dropped their vaccination requirements in December after a federal judge issued a stay on the mandate.

Many companies, including Target, have been silent on the mandate.

Attorneys general in 27 states on Wednesday sent a letter to OSHA asking the agency to withdraw its ETS for large employers after the Supreme Court upheld an injunction against the mandate.

The Biden administration has not withdrawn the proposed ETS despite the Supreme Court’s ruling, which said OSHA does not have the statutory authority to impose a widespread vaccine mandate.

The letter from the attorneys general stated:

“The Occupational Safety and Health Act was designed to address dangers employees face at work because of their work — not dangers that are no more prevalent at work than in society generally. The United States Supreme Court agrees and held that the ETS — or any similar permanent standard for that matter — fails to address a unique workplace hazard and is therefore unlawful.”

Texas Attorney General Paxton said, “The constitution is clear, it is not lawful to force hard-working Americans to choose between their jobs and family’s financial security, on the one hand, and their physical well-being on the other.”

The coalition of attorneys general is worried the mandate will have detrimental effects on employers and small businesses if it goes into effect.

“The ETS fails to adequately consider the widespread economic damage the vaccine mandate may cause,” the letter stated. “This impact will be especially felt by vulnerable small businesses if a permanent standard applies to them.”