Is ‘New World Order’ Coming? If So, Which One?

On The Hill’s “Rising,” Kim Iversen asked whether the “New World Order” was just a right-wing conspiracy or a concept now “loosely falling out of the mouths of global leaders everywhere.” 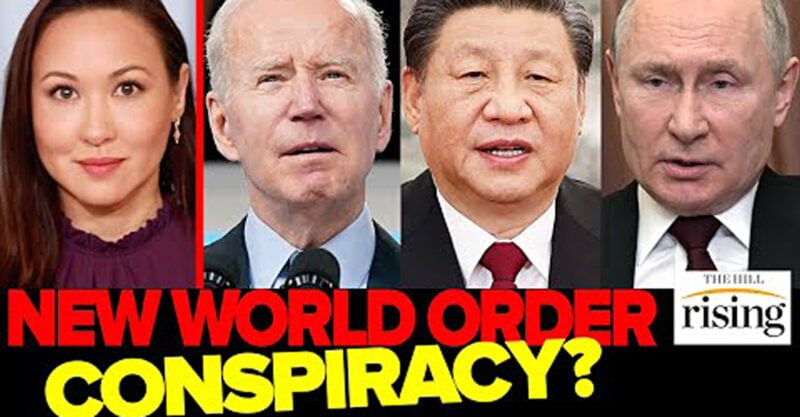 On Thursday’s episode of The Hill’s “Rising,” journalist and political commentator Kim Iversen speaking with hosts Ryan Grim and Robby Soave asked whether the “New World Order” was just a “right-wing conspiracy” — or a mainstream concept now “loosely falling out of the mouths of global leaders everywhere.”

On the side of the “right-wing conspiracy” theory, Iversen cited in full the Anti-Defamation League’s (ADL) definition of the term “New World Order:”

“A term used to refer to a right-wing conspiracy theory that became popular among anti-government extremists from the 1990s onwards. ‘New World Order’ conspiracists believe that a tyrannical, socialist ‘one-world’ conspiracy has already taken over most of the planet and schemes to eliminate the last bastion of freedom, the United States, with the help of collaborators within the government.

“Through repressive measures, as well as manufactured crises such as terrorist attacks and pandemics, the globalist conspirators seek to eliminate dissent and to disarm Americans so that the ‘New World Order’ can move in and enslave them.

The ADL, founded in 1913, describes itself as “a global leader in exposing extremism, delivering anti-bias education and fighting hate online.” Its “ultimate goal is a world in which no group or individual suffers from bias, discrimination or hate.”

Iversen suggested that with a few strategic substitutions — “authoritarian” for “tyrannical,” “control” for “enslave” and “censorship” for “concentration camps” — the ADL’s definition of New World Order “doesn’t sound that insane” in relation to current events.

“Many of us lost our freedoms during the pandemic,” Iversen said. “And in the recent era, we’ve seen dissenters like Julian Assange and various protesters jailed for speaking up.”

On the other hand, Iversen said, the phrase “New World Order” is now being used casually by world leaders everywhere — from lead speakers this week at the World Government Summit 2022 to President Biden himself who on March 21 said:

Is this just a question of “conspiracy theorists” taking the president’s “innocent use of the phrase” out of context, Iversen asked — referring to the “eye-rolling” response by mainstream media, eager, she said, to fact check “for context?”

Iversen did not think so:

“So now we have Joe Biden, Emirati leaders [at the World Government Summit] and Klaus Schwab all talking about the ‘New World Order’ forming. What next?

“Well, it turns out the Chinese and the Russians have been talking about it as well. In fact, the two nations just got together yesterday and declared they’re building a new democratic world order together.”

Iversen said, “it’s time to pay attention to the conspiracy theorists, especially as Russia and China force the world away from the petrodollar and into the new petro-ruble or petroyuan.”

She added, “Imagine a ‘New World Order under China — it would be a tyrannical socialist world using repressive measures to eliminate dissent and housing dissenters in concentration camps.”

Responding to Iversen, Soave said, “A lot of these forces are at odds with each other, but that doesn’t mean you’re wrong about the dangers of forces that want to restrict our freedoms, seizing opportunities like the pandemic and terrorism to restrict those freedoms.”

Iversen said that whether one is speaking of “world orders past or future world orders” it’s all “based on the money.”

And while there is obviously true opposition between China and the U.S., China’s heavy investments in virtually every U.S. industry have bought “a ton of influence,” Iversen said:

“They own a lot of [American] farmland, they own investments into nearly every single industry, and we’ve seen that play out publicly on the stage such that the NBA can’t criticize certain things because they are so heavily invested in China.”

As the segment concluded, Grim suggested we’re facing a situation similar to the political machinations portrayed on HBO’s “Game of Thrones.”