During today’s meeting, members of a CDC advisory committee acknowledged 1,200 cases of heart inflammation in 16- to 24-year-olds, and said mRNA COVID vaccines should carry a warning statement — but physicians and other public commenters accused the CDC of exaggerating the risk to young people of COVID, and minimizing the risk of the vaccines. 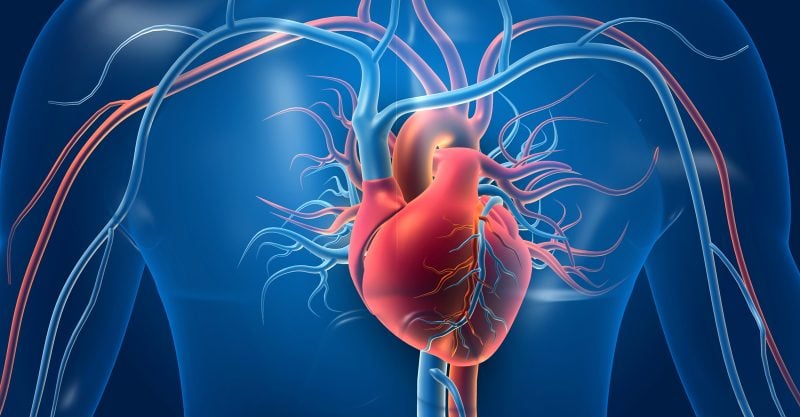 The Centers for Disease Control and Prevention’s (CDC) Advisory Committee on Immunization Practices (ACIP) said Wednesday there is a “likely association” of “mild” heart inflammation in adolescents and young adults after vaccination with an mRNA COVID vaccine and a warning statement is warranted.

According to a report by the COVID-19 Vaccine Safety Technical (VaST) Work Group, the risk of myocarditis or pericarditis following vaccination with the mRNA-based shots in adolescents and young adults is notably higher after the second dose and in males.

“Clinical presentation of myocarditis cases following vaccination has been distinct, occurring most often within one week after dose two, with chest pain as the most common presentation,” said Dr. Grace Lee, co-chair of VaST.

There have been more than 1,200 cases of myocarditis or pericarditis in 16- to-24-year-olds who received an mRNA COVID vaccine, according to a series of slide presentations published Wednesday at the ACIP meeting.

The agency said through June 11 there have been 267 cases of myocarditis or pericarditis reported after receiving one dose of the mRNA vaccines and 827 reported cases after two doses. There are 132 additional cases where the number of doses received is unknown.

Dr. Tom Shimabukuro, deputy director of the CDC’s Immunization Safety Office, said in a presentation that data from one of the agency’s safety monitoring systems — Vaccine Safety Datalink (VSD) — suggests a rate of 12.6 cases per million in the three weeks after the second shot in 12- to 39-year-olds.

Nass further questioned why the ACIP did not include any of the almost 6,000 deaths reported to the Vaccine Adverse Events Reporting System (VAERS) in the risk pool when determining risk and benefits.

During the presentation, a CDC spokesperson said vaccine considerations for people with a history of myocarditis and pericarditis will be updated: 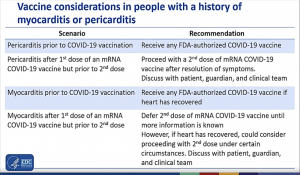 CDC officials said they are gathering more data to fully understand the potential risks, how to manage them and whether there are any long-term issues.

Officials emphasized the benefits of vaccines outweigh the risks, and noted that for every million doses of mRNA vaccine given, there are far more COVID cases and hospitalizations prevented compared to the number of potential myocarditis cases.

Public commenters — during the public comment session — chastised the CDC and its advisory committee for adopting the stance that benefits of experimental COVID vaccines outweigh the risks in teens, when teens have a relative zero risk of dying from COVID, and are at a very low risk of experiencing adverse events.

According to CDC data, the death rate among adolescents ages 0 to 17 who get COVID and are subsequently hospitalized is 0.7%, with many experiencing either mild or no symptoms at all. The COVID death rate in all adolescent age categories is less than 0.1%, according to the CDC.

Two papers published May 19 in the journal of Hospital Pediatrics found pediatric hospitalizations for COVID were overcounted by at least 40%, carrying potential implications for nationwide figures used to justify vaccinating children.

Another study, referenced by a public commenter, showed in many cases COVID diagnosis was incidental to the underlying reason the patient was hospitalized — meaning there was no documentation of COVID symptoms prior to hospitalization.

“As of June 11, looking at myocarditis and pericarditis alone, there have been 197 reports in 30-39 year olds, 392 reports in 19-29 year olds and 279 reports in 18 years and younger. Looking at the Harvard Pilgrim study which states that less than 1% of adverse events were reported to VAERS, it is reasonable to assume that these numbers are much higher than are being reported. From the meeting here today, we heard that there have been more than 1,200 cases of myocarditis and pericarditis, mostly in people under 30. The numbers are growing quickly. This should ring the alarm for all of you. It certainly does for me.”

William Houston, associated with a public research organization focused on public health and safety, said during public comment the CDC is withholding VAERS data and delaying publishing adverse event reports. Actual numbers, Houston estimated, are 3 to 14 times higher than what’s been made public to date.

This is consistent with several stories of myocarditis in teens recently covered by The Defender — all of whom reported to VAERS and were given I.D. numbers, but are not yet published in the VAERS database.

In exclusive The Defender interview, 18-year-old Isaiah Harris + his father described how Isaiah had to be hospitalized within 48 hours of second dose of Pfizer vaccine + subsequently had a heart attack.

Another public commenter [time stamp 3:56:28], a parent and parent advocate, expressed concern that ACIP members were instructed to vote during a previous meeting, even though data were not yet available. She also questioned why the different reporting systems are using different age group ranges.

She chastised the committee’s canceling of the emergency meeting on heart inflammation scheduled for June 8 and noted that in December, the ACIP met multiple times during weekends when the manufacturers wanted their vaccine approvals.

Public commentator [time stamp 3:59] Dr. Leslie Moore, physician and mother, said the data on COVID vaccines are atrocious and frightening. Moore said vaccines are still investigational and there is no comprehensive monitoring and data collection.

“People get shot up and left to deal with the consequences on their own,” Moore said.

“All we have is the VAERS system, which is voluntary self-reporting. We know VAERS only captures 1-10% of all adverse events. Adverse events are grossly under-reported for a variety of reasons. I looked at open VAERS this morning. These products have amassed 6,000 deaths and 20,000 hospitalizations in the U.S, alone –– which is more than the other 70 vaccines for the last 30 years combined. That is with gross under-reporting and a two-month backlog. Let’s face it, these vaccines are not safe.

“Now let’s consider these products for children. What is the risk-benefit analysis? Children are at a statistically insignificant risk from COVID-19, so there is no benefit to vaccination, and you can’t vaccinate them to benefit others. These shots don’t work that way. They don’t prevent infection or transmission. Your shot, at best, protects you from severe symptoms, no one else.

“Children have no benefit, only risks from these products. Any child injured or killed by the shot likely would have done fine with the virus and received broad and lasting natural immunity.”

Natural immunity is always better than vaccine immunity — anyone who says otherwise needs to go back to medical school, Moore told the committee members.