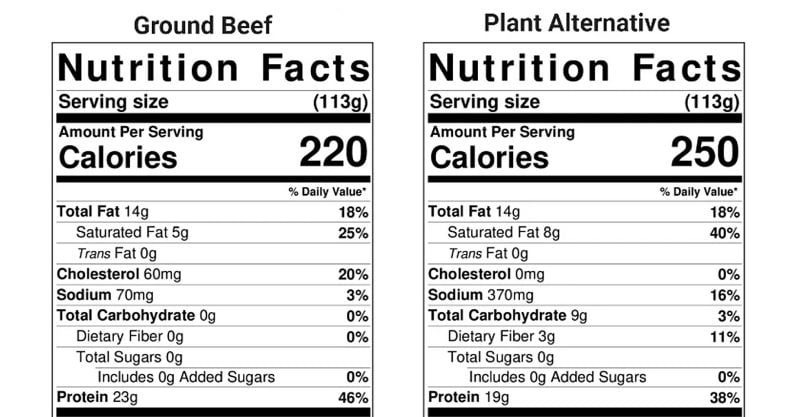 Despite having similar Nutrition Facts panels, plant-based meat and grass-fed meat have “large nutritional differences,” according to a study published in the journal Nature, which found the nutrients differed by 90%.

The authors of the research were unable to determine from the data which product is “healthier,” but they did conclude the nutritional differences suggest meat alternatives —  which include popular brands like Impossible Burger and Beyond Burger — and grass-fed meat are not “nutritionally interchangeable.”

“While both meat and plant foods can provide important nutrients, it is important for consumers to realize that meat and plant-based meat alternatives are not one-to-one nutritional replacement, despite what their almost identical Nutrition Facts panels may suggest.”

Foods contain “hundreds-to-thousands of nutrients,” van Vliet said, most of which do not appear on nutritional labels. “When taking into account these nutrients, we found major differences between meat and a popular plant-based meat alternative.”

The results were calculated using metabolomics, a profiling technique that compares nutrients and metabolites present in biological samples.

The researchers discovered several metabolites were found either exclusively or in greater quantities in grass-fed beef.

Some of the nutrients found only in grass-fed meat include docosahexaenoic acid (an omega-3 fatty acid), niacinamide (a form of vitamin B3), glucosamine, hydroxyproline (an amino acid) and the antioxidants allantoin, anserine, cysteamine, spermine and squalene.

Metabolites found only, or in greater amounts, in plant-based meat include ascorbate (vitamin C), phytosterols and several phenolic antioxidants such as loganin, sulfurol, syringic acid, tyrosol and vanillic acid.

The study authors said foods often contain a wide variety of nutrients that don’t appear on labels but may have “potential health implications.”

While several of the nutrients analyzed are considered non-essential, “their importance should not be ignored, as their absence (or presence) can potentially impact human metabolism and health,” the scientists said.

Nutritional differences are just one reason consumers cite when choosing between fake meat and real meat. Another has to do with how some fake meat is produced.

For instance, the Impossible Burger is made with soy leghemoglobin (heme), a color additive produced in a genetically engineered yeast. The ingredient, used to make the burger appear to “bleed” like real meat, never underwent adequate safety testing, according to the Center for Food Safety (CFS).

Last year, CFS challenged the U.S. Food and Drug Administration’s (FDA) approval of soy leghemoglobin. CFS claimed that because the ingredient is “new to the human diet, and substantial quantities are added to the Impossible Burger, the FDA should have required extensive safety testing before approving its use as a color additive, as required by law.”

CFS said in its lawsuit that soy leghemoglobin is made using “genetic engineering on steroids,” a process the nonprofit says has “virtually no regulatory oversight.”

But Impossible Foods dismissed the findings as “non-adverse” or as having “no toxicological relevance.”

Despite the legal challenges, a federal appeals court in May upheld the FDA’s approval of soy leghemoglobin.

Impossible Foods, co-founded by Google, Jeff Bezos and Bill Gates, has taken its product internationally, setting its sights on countries such as Australia, New Zealand, Europe and Asia.