Are the Unvaxxed More Dangerous Than a Fire? Kim Iversen Asks

On the latest episode of The Hill’s “Rising,” journalist and political commentator Kim Iversen weighed the supposed benefits of the COVID vaccine against the risks of losing thousands of essential workers. 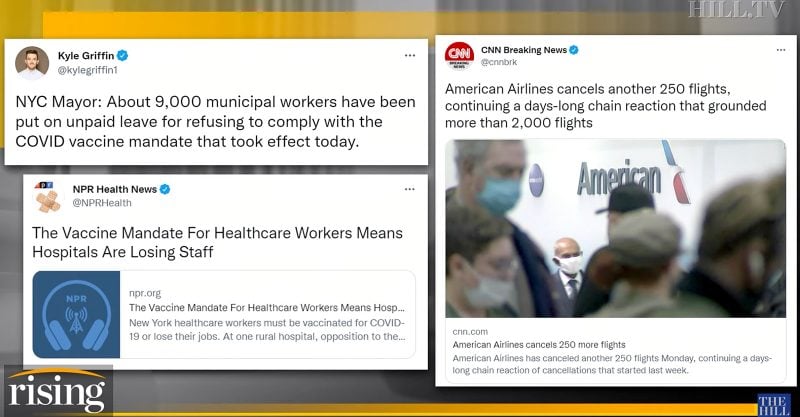 On the latest episode of The Hill’s “Rising,” journalist and political commentator Kim Iversen expanded her case against vaccine mandates, asking if government and industry have provided enough evidence of COVD vaccine effectiveness to warrant mandates that are handicapping society’s essential services.

Iversen ran through some of the negative effects the vaccine mandates have had on the essential workforce.

“Over the weekend, American Airlines experienced massive flight cancellations and delays allegedly due to mandates and still have a supply chain problem being made worse by the thousands of truckers and warehouse workers who are unwilling to adhere to the mandate. Also, healthcare workers are resigning, leaving gaping holes in our medical system.”

“They’re telling us it’s more dangerous to have unvaccinated essential workers in our communities than it is to have no workers at all when you need them,” she said.

Iversen said she believes the government should be required to present data which shows the massive health benefits to vaccination before requiring anything.

“If the government is going to force anything onto anyone, let alone disrupt our essential services, shouldn’t there be a massive burden of proof they need to present to us, showing why they feel it’s necessary to take such authoritarian actions?” she asked.

“If the government is going to put forward mandates or any other laws, especially ones that force us to inject something into our bodies, they should have to show a really good reason as to why they’re forcing it,” she continued.

Iversen said the government’s reasoning for mandates is “if everyone is vaccinated we can end the pandemic,” the “vaccine stops or slows the spread” and “if people around you are vaccinated, you are safer.”

“But where is the proof that this is even true?” she asked. “Numerous studies have shown vaccines alone are not effective at stopping the spread and the vaccine makers themselves have never even claimed that’s what the vaccines do.”

“Is a theoretical third in reduction enough to mandate a vaccine?” Iversen asked.

She then pointed to an Oxford study which showed “the vaccine’s ability to limit transmission wanes within 12 weeks after the second dose.”

“So essentially, fully vaccinated people are not any different from unvaccinated people in three months time,” she said. “Collapsing our essential services for a theoretical reduction of a third for a 3-month period of time is not enough [to mandate vaccination] for me.”

“And in the real world, we aren’t seeing this third reduction in spread among highly vaccinated communities, in fact we’re seeing much more spread in many areas,” Iversen said. “The spread is happening. Vaccinated or not,” she argued.

“So the question is, do the vaccines provide enough benefit to create a massive disruption to our essential services and workforce?” she asked.

“For me the bar needs to be much much higher before I give the government this sort of power over my body and job.”