A family whose 21-year-old son developed a life-threatening reaction to Pfizer’s COVID vaccine has been waiting six months to learn if the U.S. government’s Countermeasures Injury Compensation Program will help cover their son’s medical bills, but there’s been no response from the program. 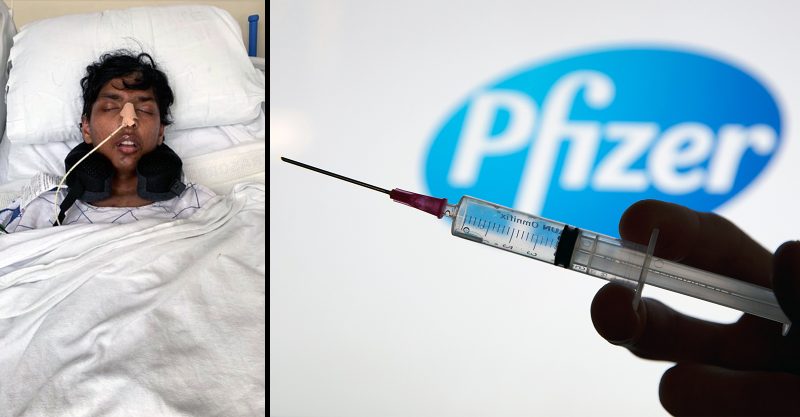 A family whose 21-year-old son developed a life-threatening reaction to Pfizer’s COVID vaccine has been waiting six months to learn if the U.S. government’s Countermeasures Injury Compensation Program (CICP) will help cover their son’s medical bills.

The CICP program, which operates under the federal Health Resources and Services Administration, provides compensation for serious injuries or death caused by certain medications, medical devices and vaccines, including COVID vaccines.

The family of Kartik Bhakta in August 2021 submitted a claim on behalf of their son. So far, the claim has been ignored.

Bhakta, a second-year pre-med student described as a “genius” by his father, was severely injured after his first Pfizer shot. According to hospital records, Bhakta suffered from an extremely rare life-threatening adverse reaction to the vaccine.

Within two hours of his first dose, Bhakta experienced nausea and vomiting. He then developed back pain, a severe rash, tinnitus, eye problems, kidney failure, deafness and neuropathy. He spent three months in the hospital.

The day before getting vaccinated, Bhakta was healthy and had no medical conditions, his father said. The doctors said the neuropathy could be caused by steroids given to him for treatment, but they attribute the other conditions to the vaccine.

“We need some kind of help and direction from somewhere so that way he can get medical assistance or whatever he needs,” Bhakta’s father said.

In addition to a lengthy hospitalization, Bhakta underwent numerous surgeries, can’t walk without a walker and had to put his schooling on hold.

His family relocated to Texas in 2021 to be closer to the medical services their son needed, as the school’s insurance program stopped covering Bhakta’s medical bills in August.

His family does not have coverage for the additional eye surgeries their son needs and cannot work due to his medical appointments and need for care.

Instead, they’re relying on the government’s CICP to compensate him for his injuries.

The failures of the CICP to compensate the vaccine injured

The Bhakta family submitted a claim to the CICP in August and received an email that a staffer would follow up, but never received a response.

Over the next several months, family members contacted the CICP by phone and email multiple times. They unsuccessfully tried to obtain assistance from U.S. Rep. Filemon Vela’s (D-Texas) office.

Asked what the family would do if denied assistance, Bhakta’s father replied, “I don’t know. Then why is the government forcing us to take a vaccine if they’re not taking responsibility?”

There are about 300 claims pending with the CICP for injuries or deaths due to COVID vaccines. As of Feb. 1, the CICP had approved only one claim, but that claim has not been paid out.

To be compensated by the CICP for a COVID vaccine injury, it must be established,  based on “compelling, reliable, valid, medical and scientific evidence,” that the injury or death was directly caused by the vaccine.

The CICP provides compensation only for out-of-pocket medical costs, lost wages or a death benefit. It does not compensate for pain and suffering or attorneys’ fees. The claim must be filed within one year of the injury.

According to Sean Greenwood, a vaccine injury attorney in Texas, even if the family does get an approved claim, they could wait “many many years” to receive compensation.

Once the government approves the vaccine for children under 5 years old and pregnant women, compensation requests will move over to the National Vaccine Injury Compensation Program (NVICP), Greenwood said. The NVICP allows up to $250,000 for pain and suffering.

The best option for people seeking recourse from COVID vaccine injuries is to file a CICP claim within one year of receiving the vaccine — and hope COVID vaccines will be added to the NVICP, Greenwood added.

“The best thing to do just to preserve your rights is to file in the CICP,” Greenwood said. “I just don’t have a lot of confidence that these people are going to get a good result.”

It is unknown whether CICP claimants will also be able to file in the NVICP if the COVID vaccine is added to the program.

Countries like Japan and France have already added COVID vaccines to their equivalent courts, and those injured receive compensation “pretty quickly,” according to Greenwood.

Italy plans to set aside 150 million euros ($169.91 million) to compensate those injured by COVID vaccines, according to a draft decree shown to Reuters. About 50 million euros in 2022 and an additional 100 million in 2023 will be reserved for those permanently disabled by the COVID vaccines recommended by Italy’s health authority.