The 86-year-old sports icon received the first of two doses of Moderna’s vaccine on Jan. 5, in an attempt to inspire other Black Americans to step up to the plate and get the vaccine. 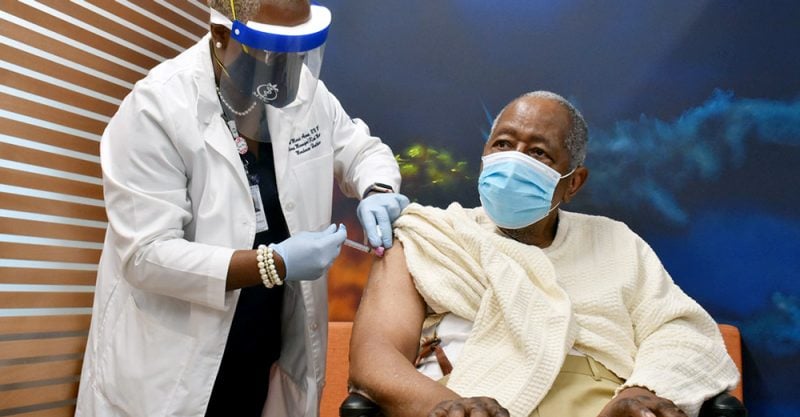 Baseball legend Hank Aaron, who received the Moderna COVID vaccine on Jan. 5, has died. According to the New York Times, the Atlanta Braves confirmed the 86-year-old Hall of Famer’s death today, but did not provide further details.

CNN reported that Aaron died “peacefully in his sleep,” and that no cause of death was disclosed.

Aaron made headlines earlier this month when he was photographed getting the Moderna vaccine. He told the Associated Press at the time that getting vaccinated “makes me feel wonderful.” He added:

“I don’t have any qualms about it at all, you know. I feel quite proud of myself for doing something like this. … It’s just a small thing that can help zillions of people in this country.”

Aaron was vaccinated at the Morehouse School of Medicine health clinic in Atlanta, in what news reports said was an attempt to inspire other Black Americans to step up to the plate and get the vaccine. The AP reported at the time:

“Rolling up their sleeves to take the first of two doses, these octogenarians, their spouses and several other civil rights leaders who received the shots in a brand-new health clinic at the Morehouse School of Medicine acknowledged the legacy of mistrust that many African Americans have toward medical research, stemming from the infamous Tuskegee experiment in which U.S. health workers left syphilis untreated in Black men without their consent, making them suffer needlessly.”

In December, VOX reported on the launch of a global campaign using influencers and celebrities to help overcome “vaccine hesitancy,” stating that it “will be unprecedented” and many institutions will have a role, including government and public health authorities.

However, health officials continue to encounter pushback, including from healthcare workers.

Adverse events to the COVID vaccine have been reported worldwide. Germany and Norway have reported a combined 43 deaths among elderly people who received the Pfizer vaccine, prompting China health officials to call for the vaccines to be suspended, especially among the elderly.

A 2010 HHS study concluded that “fewer than 1% of vaccine injuries” are reported to VAERS.

As The Defender reported last week, California was forced to recall a batch of 330,000 Moderna vaccines after a cascade of reported injuries, though now the company says it’s okay to resume administration of that batch.

The Defender also covered the story of a 56-year-old Florida doctor who died about two weeks after getting his first dose of Pfizer’s vaccine. His death is under investigation by Florida health officials. In addition, multiple severe allergic reactions have been directly linked to the Pfizer vaccine.