The authors of a new analysis found that sperm count globally dropped by more than half between 1973 and 2018, and that the decline is accelerating. 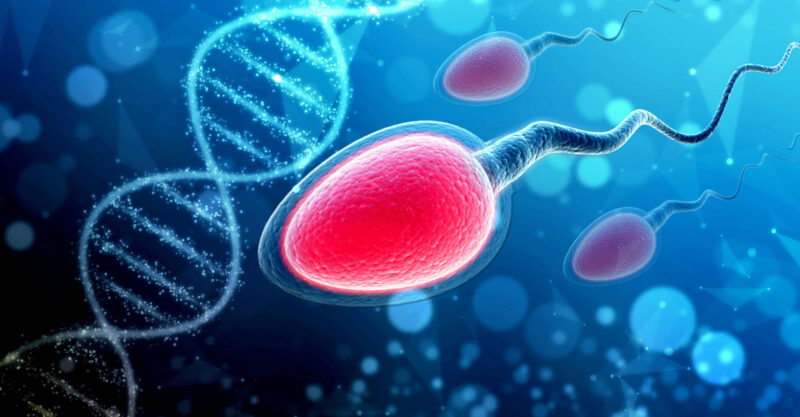 For years, scientists across the world have gathered evidence showing declines in sperm quality. Now, new research compiling the results of those studies has found that sperm count has dropped dramatically around the world, and the rate of decline is accelerating.

In a new analysis, researchers at Mount Sinai Medical Center, the University of Copenhagen, and the Hebrew University of Jerusalem, among others, found that sperm count globally dropped by more than half between 1973 and 2018, and that the decline is accelerating: Since 1972, sperm count has dropped by about 1% each year. Since 2000, the annual decrease has been, on average, more than 2.6%.

The findings raise concerns that an increasing number of people will need assistance to reproduce, as well as concerns about the overall health of human society, since low sperm count is linked to higher rates of some diseases.

And while scientists are still trying to tease out the reasons for the drop, chemical exposures, especially to pesticides, are a likely factor — and climate change may even play a role.

Researchers are calling for urgent action to bolster more research into sperm count, determine the causes of the decline, and prevent further deterioration of male reproductive health.

“We have clear evidence that there is a crisis in male reproduction,” Hagai Levine, lead author on the study and an epidemiologist at the Hebrew University of Jerusalem, told EHN.

The study builds on the team’s previous research, which showed a decline in sperm count in North America, Europe, Australia and parts of Asia of 28.5% between 1973 and 2011.

Adding data from 38 studies to the new analysis has made the case for sperm decline stronger, Shanna Swan, an author on the paper and a leading reproductive epidemiologist at Mount Sinai, told EHN.

Swan authored the book Count Down: How Our Modern World Is Threatening Sperm Counts, Altering Male and Female Reproductive Development, and Imperiling the Future of the Human Race.

She said the results could mean that in the coming decades, large swaths of the global population of men could be subfertile or infertile, or could require assisted reproduction techniques, like in vitro fertilization, or IVF, hormone treatment, or a technique called intracytoplasmic sperm injection, in which sperm are directly injected into an egg.

In addition to the drop in average sperm count, Levine said it was surprising that the rate of decline was accelerating, rather than slowing down. “Is there a tipping point, that once you cross, you get an even worse situation?” he said. “That’s something to really pay attention to.”

Overall, said Levine, the results indicate that “something is very wrong with our global modern environment.”

Sperm count is not only a reproductive concern, but an indicator for other health problems in men, and is used as a predictor for male longevity.

Men with poor sperm count tend to have higher rates of cardiovascular disease, certain cancers and even death, Michael Eisenberg, a professor of urology at Stanford University who was not involved in the research, told EHN. “This decline in sperm count could also suggest other health concerns,” he said.

A 2016 study authored by Eisenberg found that diabetes and other diseases were associated with lower reproductive health. However, said Eisenberg, the reason why overall health is linked to sperm quality is still unknown.

Eisenberg said the new study on sperm count decline is a “powerful addition” to previous evidence that sperm count across the globe has declined.

Reasons for the trend

Though the reasons for the drop were not discussed in the paper, scientists have known for decades that certain environmental factors, like exposures to pesticides (such as atrazine, alachlor and diazinon) and other endocrine-disrupting chemicals, like phthalates and polychlorinated biphenyls, or PCBs, can have impacts on reproductive health.

Nearly 20 years ago, for example, Swan and other researchers published an analysis of research into links between pesticide exposure and sperm quality, and found that 79% of studies indicated a decrease in sperm quality among those exposed to the chemicals.

Diet, activity level and stress may also play a role.

Swan and Levine said exposures to chemicals in the environment and other factors likely all play a substantial role in the sperm count trend.

And, the risk factors are related; for example, obesity is a risk factor for lower-quality sperm, but certain endocrine-disrupting chemicals — which interfere with how hormones work — are thought to contribute to obesity, as well.

Diet is hard to decouple from chemical exposures, too, since pesticide residues linger on much of the food we eat.

Additionally, both Swan and Levine said climate change could be a factor, both due to climate-related stress and actual fluctuations in temperature, since heat waves are linked to decreases in sperm quality.

Prenatal exposure may be a contributor, too. Chemical exposures during the male “programming window,” when reproductive traits are formed in utero, have an outsized effect on sperm quality later in life, said Swan.

For example, she said, when a man smokes — a known endocrine-disrupting activity — he lowers his sperm count by about 20%.

When a male is born to a woman who smokes, his sperm count is reduced by about 50%. Those effects may last for generations before subsequent children and grandchildren return to normal sperm counts.

Levine is optimistic that scientists and policymakers can reverse the trend if they can determine the causes.

Swan pointed to the sharp drop in cigarette smoking in the past 50 years as evidence that widespread lifestyle changes are possible, and said that any large-scale adoption of healthier habits, like better diets and more physical activity, can help improve reproductive health.

Making individual lifestyle changes like choosing organic, pesticide-free produce and staying away from certain plastics and chemical products can help lower a person’s exposure to endocrine-disrupting chemicals, too.

However, doing so can be difficult, especially for disadvantaged populations with less access to fresh foods, higher environmental exposures and fewer means to purchase safer, non-toxic household goods.

To truly tackle the problem, though, much more research is needed, said Swan.

One thing she’d like to see would be better tracking of sperm count, similar to how the Centers for Disease Control and Prevention tracks obesity.

Once humankind “defines a problem and puts our resources and mind into it, we find solutions that we could not have thought about when we started,” said Levine. “It’s always theoretically reversible.”

Grace van Deelen is a fellow at Inside Climate News. She has also written for EHN and MIT Biology. She holds a Master’s degree in science writing from MIT and degrees in biology and anthropology from Tufts University.