The two-dose Novavax COVID-19 vaccine on Tuesday came one step closer to obtaining Emergency Use Authorization after advisors to the U.S. Food and Drug Administration recommended its use in the U.S. 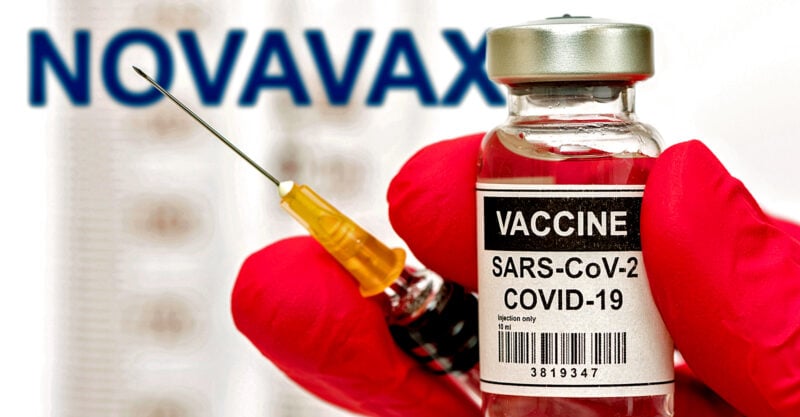 The two-dose Novavax COVID-19 vaccine Tuesday came one step closer to obtaining Emergency Use Authorization (EUA) after advisors to the U.S. Food and Drug Administration (FDA) recommended its use in the U.S.

Members of the Vaccines and Related Biological Products Advisory Committee during a public meeting voted 21-0 with one abstention to recommend the vaccine, which is produced by Gaithersburg, Maryland-based Novavax.

The head of the FDA must agree with the advisory panel that the benefits of the Novavax vaccine outweigh its risks before the agency grants the authorization.

While the FDA usually follows the recommendations of its committees, it is not obligated to do so, CNBC reported.

If the FDA follows the committee’s recommendation, a Centers for Disease Control and Prevention (CDC) panel must also recommend the vaccine, and CDC Director Dr. Rochelle Walensky must sign off. According to USA Today, this process may take several weeks.

If approved, the Novavax vaccine would initially be authorized for a two-dose regimen. Novavax has submitted a request, currently under consideration by the FDA, for approval of a third “booster” dose.

Novavax would be the fourth COVID vaccine authorized in the U.S.

Unlike the Pfizer and Moderna vaccines that use mRNA technology, and the Johnson & Johnson vaccine that uses adenovirus vector technology, the Novavax vaccine uses a more traditional vaccine technology.

That may be one reason the committee recommended the vaccine — in the hope that “unvaccinated holdouts,” skeptical of the newer technologies or allergic to components of the mRNA vaccines, will be more likely to get the Novavax shot, Politico reported.

U.S. taxpayers already paid for the Novavax vaccine, as it was funded via Operation Warp Speed. In all, $1.8 billion in taxpayer funding went into its development, according to CNBC.

However, despite the FDA committee’s unanimous vote, members raised several concerns about the Novavax vaccine, including heart-related adverse events observed during the clinical trials, and the vaccine’s effectiveness against newer COVID-19 variants such as Omicron.

Findings from the Novavax clinical trials suggest the vaccine brings on fewer side effects and adverse events than the Pfizer or Moderna vaccines, in terms of both frequency and duration, as previously reported by The Defender.

Side effects among the vaccinated were similar to those experienced by the placebo group.

Also, unlike the mRNA vaccines, Novavax does not contain polyethylene glycol, an ingredient that causes allergic reactions — in some cases severe — in some people.

The most commonly reported side effects of the Novavax vaccine included injection site pain, fatigue, headache and muscle pain.

However, FDA documents also indicated that, similar to the Pfizer, Moderna and Johnson & Johnson vaccines, the Novavax vaccine may be associated with an increased risk of heart inflammation.

Specifically, the documents show multiple instances of myocarditis and pericarditis reported after the administration of the Novavax vaccine:

“Events of lymphadenopathy were infrequent but reported by a higher proportion of participants in the NVX arm, with the highest rate observed after Dose 2 (0.2%).

“Data from passive surveillance during post-authorization use in other countries also indicate a higher-than-expected rate of myocarditis and pericarditis (mainly pericarditis) associated with the vaccine.”

In a safety database encompassing data from 40,000 Novavax vaccine recipients, four young men, ages 16 through 28, reported myocarditis or pericarditis within 20 days of injection, though one of the four had a viral illness that may have been the cause of the symptoms.

One trial participant reported myocarditis after being injected with a placebo.

“These events raise the concern for a causal association with this vaccine, similar to the association documented with mRNA COVID-19 vaccines.”

According to Dr. Lucia Lee, an official with the FDA’s division of vaccine research, those cases are “concerning” because they were recorded within days of vaccination, and because there is already an established connection between other COVID-19 vaccines and heart inflammation among young males.

However, advisers on the FDA committee ignored the above assessment in voting to recommend the Novavax vaccine.

The FDA reportedly asked Novavax to “flag” myocarditis and pericarditis as an “important identified risk” in its materials accompanying the vaccine. However, Novavax has not yet agreed to do so, according to Reuters.

Instead, Novavax claimed that “natural background events” of myocarditis can be expected in any large database, denying a connection between its vaccine and the reported cases of heart inflammation:

“Based on our interpretation of all the clinical data supporting NVX-CoV2373 … we believe there is insufficient evidence to establish a causal relationship.”

Dr. Denny Kim, Novavax’s chief safety officer, said rates of myocarditis were essentially the same in the vaccine group and the placebo group during the trial, adding, however, the rate was slightly higher among those who received the vaccine.

“We believe that the totality of the clinical evidence here is not enough to establish an overall causal relationship with the vaccine,” Kim said.

According to the latest data from the CDC’s Vaccine Adverse Event Reporting System (VAERS), between Dec. 14, 2020, and May 27, 2022, 4,213 cases of myocarditis and pericarditis were reported, with 2,583 cases attributed to the Pfizer vaccine, 1,431 cases attributed to Moderna’s vaccine and 185 cases to the Johnson & Johnson vaccine.

FDA approval for the Novavax vaccine had previously been expected as early as February, as reported in January by The Defender.

The company submitted its final trial data to the FDA on Dec. 31, 2021, and had applied for emergency authorization in the U.S. and nine other countries at that time.

It’s unclear if the delay in approving Novavax relates to concerns over heart inflammation and/or its effectiveness against the Omicron variant.

However, on news of those concerns, shares of Novavax stock fell by nearly 14% following the FDA’s analysis of the trial data, Reuters reported.

The one member of the FDA committee who abstained from Tuesday’s vote, Dr. Bruce Gellin, chief of Global Public Health Strategy for the Rockefeller Foundation, expressed concerns that the Novavax study, with data collected during 2020 and 2021, was outdated and did not provide indications regarding the vaccine’s effectiveness against the Omicron variant.

According to Gellin, “We need insights into performance, not just science that tells us about its promise.”

Nevertheless, Gellin indicated he would otherwise have voted “yes,” with conditions, stating:

“My conditional vote ‘yes’ is based on my expectation that the FDA will review the totality of the data that will be available to them, including of data that we didn’t see today, to inform their authorization decision.”

However, the trial was conducted between December 2020 and September 2021, before the emergence of the Omicron variant.

FDA officials admitted, in briefing documents produced in advance of the June 7 committee meeting, there was no available data regarding Novavax’s effectiveness against Omicron — although the documents claimed the vaccine would “likely” still prevent severe illness brought on by the variant.

Dr. Eric Rubin, a member of the FDA’s committee and an infectious disease expert at Harvard University, expressed disappointment that data regarding Novavax’s effectiveness against Omicron was not presented.

However, Rubin pointed out that the data submitted by Novavax met the same standard used to authorize the Pfizer-BioNTech and Moderna vaccines in December 2020.

Dr. Filip Dubovsky, Novavax’s chief medical officer, told the committee the data indicated two doses of the company’s vaccine induced an immune response against Omicron, albeit at a lower level than against the original strain of COVID-19.

“It’s factual that we don’t have efficacy data against Omicron. What we do have is a technology that we think generates a broad immune response, demonstrated against a broad array of variants.”

A possible ‘solution’ for ‘vaccine-hesitant’ and people with allergies to mRNA shots?

The Novavax COVID-19 vaccine is built upon older protein technology, which is also used in the hepatitis B and HPV vaccines.

According to CNBC, the Novavax vaccine:

“ … produces copies of the virus’ spike protein outside the human body. The genetic code for the spike is put into a baculovirus that infects moth cells, which produce copies of the spike that are then purified and extracted.

“The spike copy, which can’t replicate or cause Covid, is injected into people inducing an immune response against the virus.”

Dr. Peter Marks, head of the FDA’s vaccine review committee, argued during Tuesday’s meeting, that because of “vaccine hesitancy,” which has led to about 23% of Americans being unvaccinated, the government should do everything within its power to offer more options.

Marks further argued the Novavax vaccine might appeal to those who are not yet vaccinated and who harbor reservations toward the mRNA technology used in the Pfizer and Moderna COVID-19 vaccines.

While the Johnson & Johnson COVID-19 vaccine is also a non-mRNA vaccine, the CDC last month restricted the vaccine’s use due to the risk of blood clots.

Novavax executives also shared their belief that their non-mRNA vaccine may appeal to some people who are currently not vaccinated.

However, Dr. Arthur Reingold, an epidemiologist at the University of California, Berkeley and a member of the FDA advisory panel, expressed skepticism that many unvaccinated people would opt to receive the Novavax vaccine, especially in light of evidence that suggests that it might be associated with a risk of heart inflammation.

Reingold, however, said his hope is “to be proven wrong.”

Other medical professionals have expressed concerns about the potential safety, or lack thereof, of the spike protein delivered by the Novavax vaccine.

As previously reported by The Defender, Byram Bridle, Ph.D., professor of immunology at the University of Guelph, Ontario, found upon review of a Pfizer vaccine biodistribution study that the spike protein as delivered by the mRNA is a dangerous toxin.

Brian Hooker, Ph.D., chief scientific officer at Children’s Health Defense, told The Defender in January 2022 the spike protein is likely to last a shorter time in the human body with the Novavax vaccine than with the currently FDA-authorized vaccines, due to its use of a more established technology for delivery of the protein.

However, according to Hooker, “since the spike protein has been consistently shown to create clotting issues in the blood, there are still concerns that need to be addressed and tracked.”

Novavax noted its vaccine can be stored at ordinary refrigerator temperatures, unlike the deep freezing required by the Pfizer and Moderna vaccines.

The company said it has millions of doses of its COVID-19 vaccine available and ready to ship upon receiving FDA authorization.