The U.S. Food and Drug Administration’s advisory panel today voted to recommend the agency allow Pfizer to amend its Emergency Use Authorization for its COVID vaccine for children 5 through 11 years old, despite a host of objections from scientists and physicians. 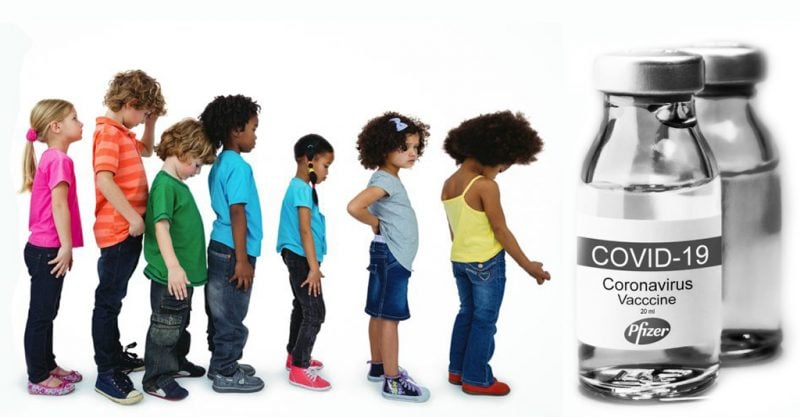 The U.S. Food and Drug Administration’s (FDA) advisory committee today endorsed Pfizer’s COVID vaccine for children ages 5 to 11, despite strong objections raised during the meeting by multiple scientists and physicians.

The vote passed with 17 supporting it and one abstention.

Before the shots can be rolled out, the FDA will have to formally authorize the vaccine, and the Centers for Disease Control and Prevention (CDC) must also weigh in with its own recommendations — but the Biden administration’s announcement last week that it has already ordered 68 million doses of the pediatric vaccine suggests Pfizer’s request will sail through.

During today’s meeting, the Vaccines and Related Biological Products Committee (VRBPAC) heard evidence from Pfizer and regulators, and listened to concerns from numerous experts.

According to the FDA website, as of Oct. 25, the agency had received 139,470 comments from the public prior to today’s meeting — a number federal officials described as strikingly high.

As he opened the meeting, Dr. Peter Marks, director of the FDA’s Center for Biologics Evaluation and Research (CBER), said, “I want to acknowledge the fact that there are strong feelings that have clearly been expressed by members of the public both for and against” authorization.

Marks stressed the only question before the experts was whether shots should be allowed, not whether to mandate them, the New York Times reported.

The dose for younger children would be one-third the strength given to people 12 and older, with two shots given three weeks apart.

Based on CDC data presented during the meeting, among children 5 to <12 years of age, there have been approximately 1.8 million confirmed and reported COVID cases since the beginning of the pandemic, and only 143 COVID-related deaths in the U.S. through Oct. 14.

In this same age group, there were 8,622 COVID-related hospitalizations through Sept. 18.

“This translates to cumulative incidence rates of approximately 6,000 and 30 per 100,000 for confirmed COVID cases and COVID-related hospitalizations, respectively, among children 5 to <12 years of age,” Pfizer’s application said.

Children with underlying medical conditions, such as asthma, diabetes and obesity, made up two-thirds of severe COVID cases.

Pfizer provided safety data on two study cohorts of children ages 5 to 11, both of roughly equal size. The first group was followed only for about two months, the second for only two-and-a-half weeks.

Pfizer’s study found its vaccine was about 91% effective against symptomatic COVID in children, based on 16 cases of COVID in the placebo group and three cases in the vaccinated group over the brief follow-up period.

Most side effects occurred within a couple of days and included pain at the injection site, fatigue, headache, muscle pains and chills, Pfizer said.

According to Pfizer, the number of participants in the current clinical development program was “too small to detect any potential risks of myocarditis associated with vaccination.”

Long-term safety of Pfizer’s COVID-19 vaccine “to evaluate long-term sequelae of post-vaccination myocarditis/pericarditis” in participants 5 to <12 years of age will not be studied until after the vaccine is authorized for children,” Pfizer’s application noted.

Experts raised concerns over the lack of safety and efficacy data presented by Pfizer for use of its COVID vaccine in younger children, and they pointed to increasing safety signals based on reports to the Vaccine Adverse Event Reporting System (VAERS).

They also questioned the need to vaccinate children — whose risk of dying from COVID is “almost nil” — at all.

According to Dr. Meryl Nass, member of the Children’s Health Defense Scientific Advisory Panel, Pfizer once again did not use all of the children who participated in the trial in their safety study.

“Three thousand children received Pfizer’s COVID vaccine, but only 750 children were selectively included in the company’s safety analysis,” Nass said. “Studies in the 5-11 age group are essentially the same as the 12-15 group — in other words, equally brief and unsatisfying, with inadequate safety data and efficacy data, with no strong support for why this type of immuno-bridging analysis is sufficient.”

Nass said, “All serious adverse events were considered unrelated to the vaccine.”

During the meeting and in its FDA application, Pfizer argued children should be vaccinated to prevent SARS-CoV-2 transmission, yet the company did not assess asymptomatic transmission.

When questioned further, Gruber was unable to cite specific evidence to back his assertion.

Steve Kirsch, founder of the COVID-19 Early Treatment Fund, asked the panel how they could do a risk-benefit analysis with Pfizer’s COVID vaccine if they did not know the CDC’s VAERS under-reporting factor (URF).

“How can you do a risk-benefit of analysis of COVID vaccines if you don’t know the URF? This is extremely, extremely important. You have been assuming it has been one. It is not one. Using a URF of 41, which is calculated using CDC methodology, we find over 300,000 excess deaths in VAERS. If the vaccine didn’t kill these people, what did?”

“How many Americans have to die before you pull the plug?” Kirsch asked.

Kirsch also questioned the panel on why Maddie de Garay’s severe adverse reaction to the Pfizer vaccine, which left her paralyzed, was not reported by the company to the FDA.

Dr. Jessica Rose, viral immunologist and biologist, told the panel EUA of biological agents requires the existence of an emergency and the nonexistence of alternate treatment.

“There is no emergency and COVID-19 is exceedingly treatable,” Rose said.

In a peer-reviewed study co-authored by Rose, myocarditis rates were significantly higher in people 13 to 23 years old within eight weeks of the COVID vaccine rollout.

“In an act of censorship, this paper has been temporarily removed and it has now been killed without criticism of the work,” Rose said, noting the timing of the removal was strange.

Rose said tens of thousands of reports have been submitted to VAERS for children ages 0 to 18.

“In this age group, 60 children have died — 23 of them were less than 2 years old. It is disturbing to note that “product administered to patient of inappropriate age was filed 5,510 times in this age group. Two children were inappropriately injected, presumably by a trained medical professional, and subsequently died.”

Dr. Josh Guetzkow, a senior lecturer at the Hebrew University of Jerusalem, said expanding the EUA to children is unnecessary, premature and will do more harm than good.

Guetzkow said there is no emergency for children, especially healthy ones whose risk of severe illness and death is “almost nil.” 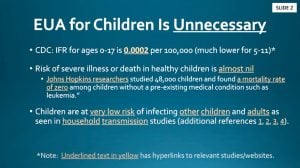 Guetzkow said kids with pre-existing conditions and prior COVID infections were not included in Pfizer’s study, so including them in the EUA is negligence.

“Pfizer’s trial is woefully underpowered to detect specific safety concerns, such as myocarditis, just like the adolescent study was, and if they weren’t able to detect an unexpected safety concern there, they wouldn’t be able to here,” Guetzkow said.

“In Pfizer’s study, only .5% of controls were dropped due to important protocol violations, versus 3% in the treatment group. The odds of that happening by chance are 1 in 10,000. This deviation is poorly explained with no ITT analysis. The study is not double-blind and may be subject to bias. Most VSD safety monitoring programs have not reported results, why not wait?”

Guetzkow said, “from CDC reports, we can expect that for every 18 child hospitalizations prevented, at least 43 will end up in the hospital for all causes following vaccination,” yet, the “FDA’s risk-benefit analysis only counts myocarditis hospitalization.”

“We calculated the ratio of adverse events reported per million Pfizer vaccinations to reports per million flu vaccinations among teenagers to see what to expect in children. Serious events are reported 51% more often for Pfizer, deaths 47 times, life-threatening conditions 49 times,” Guetzkow said.

Guetzkow asked the panel to look at the data on COVID vaccines compared to flu vaccines. Pointing to the data on reproductive organs, Guetzkow asked, “why would we expect children to take these risks to protect adults?”

There are more than 900 types of adverse events reported after Pfizer vaccination that have never been reported after flu vaccines, including 11 cases of multisystem-inflammatory syndrome (MS-C) that occurred without previous history of COVID infection, Guetzkow said.

He added that if the panel was considering authorizing Pfizer’s COVID vaccine to prevent MS-C — as Pfizer’s application suggested as one of the reasons they should — the panel should reconsider.

During another part of the meeting, Julia Barnes-Weise, director of the Global Healthcare Innovation Alliance Accelerator, said pharmaceutical companies have concerns.

“One of them is, especially for a not-yet-approved vaccine, that they could be held liable for any injury that that vaccine seems to have caused,” Barnes-Weise said.

In a preliminary analysis last week, FDA reviewers said protection would “clearly outweigh” the risk of a very rare side effect in almost all scenarios of the pandemic, PBS News Hour reported.

Children’s Health Defense (CHD) said yesterday it would take legal action against the FDA if it granted EUA for the Pfizer-BioNTech vaccine for children 5- to 11- years old.

“CHD will seek to hold you accountable for recklessly endangering this population with a product that has little efficacy but which may put them, without warning, at risk of many adverse health consequences, including heart damage, stroke, and other thrombotic events and reproductive harms.”