Euthanasia, Even Among Children, Is on the Rise — What’s Driving the Trend to Market Death?

The growing worldwide trend of euthanasia and/or assisted suicide, especially among children and young people, has critics asking troubling questions about the real motivation behind a spate of new laws. 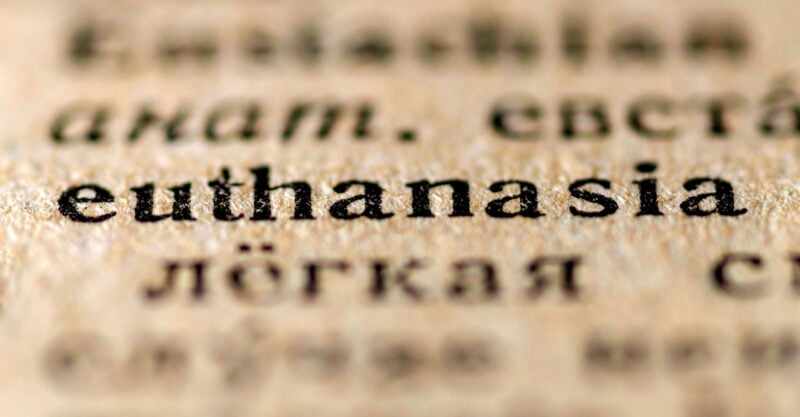 In a recent CHD.TV episode of “Good Morning CHD,” three Canadian doctors — Drs. Charles Hoffe and Stephen Malthouse and Chris Shaw, Ph.D. — discussed Canada’s disturbing normalization since 2016 of “medical assistance in dying” (“MAID”) and their government’s possibly imminent endorsement of the practice for “mature minors” who request death without parental knowledge or consent.

Among the first 100 patients to avail themselves of MAID in the province of Ontario, more than 5% were younger adults ages 35-54.

In the Netherlands and Belgium, other countries that allow euthanasia, those under age 60 account for 12.5% and 15% of those euthanized, respectively.

What the Canadian doctors were discussing on “Good Morning CHD” was a consequential 2021 modification to Canada’s original MAID law, eliminating the criterion that previously had made it a requirement for a candidate’s death to be “reasonably foreseeable” — and making decisions about eligibility far more subjective.

Even for those with “reasonably foreseeable” deaths, the bill eliminated a formerly mandated 10-day “reflection period” and downgraded the requirement for independent witnesses from two to one.

The three doctors and other critics of the more expansive policy warn that it will “nurture the country’s growing culture of death” and open the door to even more widespread implementation of a practice that is already ethically contentious, particularly since the Canadian government has pledged to consider eligibility for minors as young as 12 if deemed “capable of making decisions with respect to their health.”

Extending MAID eligibility to youth — which could be on the horizon as soon as 2023 — would mean that “before children in Canada can drive vehicles, they may be allowed to consent to physicians taking their lives.”

As Hoffe wryly commented to his two colleagues, “It is amazing the lengths that the government seems to be going to — to reduce the population.”

A growing trend, including in the youngest

Legalization of euthanasia and/or physician-assisted suicide is a growing trend worldwide, exhibiting a “momentum” that “appears unstoppable.”

Not only are more and more nations endorsing a practice that was “prohibited and morally condemned” throughout much of human history, but every country or jurisdiction that allows it is experiencing the same year-over-year growth as Canada.

And when it comes to hastening death for young people, in particular, Canada is not entirely an outlier.

Belgium, in 2014, became the first country to legalize lethal injection for children of all ages, having laid the groundwork 12 years earlier with legal euthanasia — explicitly defined as “medical treatment” — for adults and emancipated minors.

In 2016 and 2017, according to the Daily Mail, Belgium’s “radical laws” enabled the putting to death of three children and 19 young adults under age 30. Belgium reported another child euthanasia death in 2019, a year in which the country euthanized a “record number” of people overall.

Also in the vanguard of kiddie euthanasia is the Netherlands, where a 2002 law not only established the practice for adults — with the range of eligible conditions expanded in 2007 — but allowed euthanasia for children ages 12 and up. Parental consent is not required for those 16 or 17 years old.

In the first decade, there were five assisted deaths in Dutch adolescents, including one 12-year-old.

Under a “devil’s bargain between medical professionals and prosecutors,” Dutch doctors also can kill certain babies in their first year without fear of prosecution, as long as they follow a designated protocol.

In late 2022, a member of the Quebec College of Physicians proposed something similar to the Canadian parliament, suggesting that babies with “severe deformations or very grave and severe syndromes” be candidates for assisted suicide.

Objecting, a horrified bioethicist and physician noted that this would leave too “much room for parental, physician, personal, social and economic bias.”

Given the unwarranted fear-mongering about pediatric COVID-19 — used to justify misleading and ultimately genocidal vaccine mandates for kids — it is noteworthy that during the pandemic years, the Netherlands joined Canada in pointedly escalating its kid-focused euthanasia legislation.

In late 2020, the Dutch Ministry of Health, Welfare and Sport, began taking steps to extend “active termination of life” to children ages 1-12, first stacking the deck with a favorable commissioned report from the Dutch Society of Pediatrics.

Dutch Health Minister Ernst Kuipers renewed the case for under-12 euthanasia in a June 2022 briefing to members of parliament.

Meanwhile, in May 2022, Colombia became the first Latin American country to endorse medically assisted suicide, having made euthanasia legal in 1997. The laws apply to children as young as 6.

Switzerland, where assisted suicide (but not euthanasia) has been legal for seven decades, has played an influential role in normalizing the practice for all ages, even attracting lucrative “suicide tourism” in slick designer-furnished clinics due to its willingness to provide death to foreigners.

As long as “patients commit the act themselves and helpers have no vested interest in their death,” there is no specified age limit, prompting The Guardian to observe in 2014, “technically even a healthy young person could use such services.”

According to studies of that time period, 1 in 5 assisted suicides in Switzerland involved adults under age 65, including individuals as young as 18.

A year ago, Switzerland legalized a fancy new way for people to kill themselves that is likely to appeal to young people — a space-age “coffin-like capsule with windows” designed so that the decedent-to-be can push a button, flood the interior with nitrogen and die within 10 minutes.

Why die? Let me count the ways

In 2017, Kees van der Staaij, the leader of the Netherlands’ Christian SGP party, communicated his concerns — in the Wall Street Journal, no less — about his country’s “euthanasia culture,” and other prominent figures agreed the situation might be “getting out of hand.”

That year, Dutch politicians discussed the option of legalizing euthanasia for “perfectly healthy” people, allowing “any person age 75 or over who decides their life is ‘complete’ to receive euthanasia.”

In 2015, Belgian doctors agreed to euthanize a healthy 24-year-old woman who convinced herself of a lifelong “death wish” despite growing up “with a quiet, stable family.”

Canada’s 2021 relaxation of its criteria for hastening death suggests that concerns about an out-of-hand process are legitimate — 219 individuals “whose natural deaths were not reasonably foreseeable” immediately opted that year for assisted death, with nearly half of that group (46%) citing “neurological” problems as a reason to die.

Between 2011 and 2014 in the Netherlands, doctors euthanized 110 individuals solely for mental disorders, including a man in his 30s “whose only diagnosis was autism.”

In a study published in 2020, European researchers cautioned that granting euthanasia and physician-assisted suicide (EAS) “based on a perception of the patient’s illness as being untreatable with no prospect of improvement, could … in many cases fail to meet the due care criteria listed in EAS laws.”

They added, “This practice neglects the individual’s potential for having a life worth living.”

In Canada, the Netherlands and elsewhere, some suggest that the ranks of assisted suicide candidates increasingly are likely to include not just youth and the mentally ill but also other marginalized groups, such as the homeless, the poor, the disabled, those with chronic pain — and “even dissenters who the government feels are not fit for society.”

Critics posit that instead of preserving human dignity, medically assisted death “seems to be a way to kill the vulnerable,” with the availability of assisted suicide “inducing hopelessness … and removing pressure for an improvement in psychiatric and social services.”

In fact, cost-benefit analyses have been creeping into the assisted death calculus for some time, with research and reports issued in advance of Canada’s 2021 amendments describing how doctor-assisted death could “save millions.”

Even euthanasia’s most ardent supporters are concerned that the “financial gutting of the healthcare sector” will encourage desperate people to resort to assisted death.

Reflecting the pandemic-spurred trend toward remote healthcare, Vermont’s governor signed a law this year to permit telemedicine as a route for “aid in dying.” The bill makes it possible for patients to waive the “two in-person consults and … 48-hour waiting period” ordinarily required to get a prescription, and also grants healthcare providers and pharmacists full legal immunity.

The enthusiasm that these jurisdictions display for the “freedom” to die — employing loft rhetoric about “dignity” and “humane” policies — contrasts sharply with their abysmal and malevolent performance during the pandemic, when all (with the exception of Montana) stood out in their willingness to destroy people’s livelihoods and use authoritarian measures to suppress constitutionally guaranteed freedoms.

The contrast was also evident in Spain, which chose — coincidentally or not — to legalize adult euthanasia in 2021. The same prime minister who vigorously enforced pandemic lockdowns and restrictions unironically declared that the euthanasia decision made his country “more humane, fairer and freer.”

As the pandemic disturbingly revealed, however, it is not just overt euthanasia that is on the rise — governments also appear increasingly willing to put their citizens to death without admitting to it.

In the U.K., which nominally promises a jail sentence of up to 14 years for those who help others to die, credible on-the-ground reports described the use of covert euthanasia as a “medical protocol,” with damning evidence including the health secretary’s unprecedented acquisition of a two-year supply of the execution drug midazolam in March 2020.

Citizens refer to the death of more than 136,000 elderly residents of U.K. care homes since April 2020 as the “Midazolam Murders,” but they also point out that “the UK Government and its institutions have been acting as if euthanasia is perfectly legal” for far longer, since at least 2008.

The ventilator- and remdesivir-only COVID-19 protocols inflexibly adhered to by U.S. hospitals immune from liability and salivating over hefty financial incentives — were another form of covert murder, as was the withholding around the world of safe and inexpensive treatments such as hydroxychloroquine and ivermectin.

And of course, the aggressive imposition of mandates for known-to-be-dangerous COVID-19 shots took government-instigated death and disability to even more shocking levels.

Describing how medically assisted suicide has become a cherished “progressive” and “liberal” value, one writer asks, “What if a society remains liberal but ceases to be civilized?”

As the cultural conditioning favoring euthanasia ramps up, citizens everywhere urgently need to query their governments’ uncivilized motives for both silently and openly celebrating death, rather than life.