COP is an organization of global capitalist plans for the intensification of exploitation. It needs to be dead to us, as our presence there legitimizes a process that is simultaneously against us and against the planet. 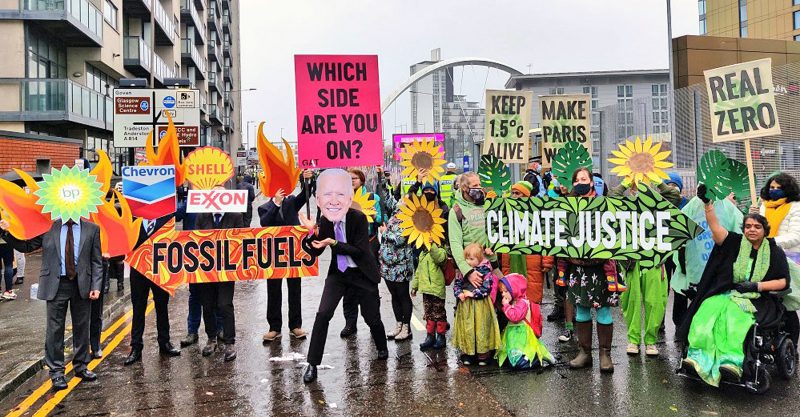 This COP was as disappointing as any of the previous one. The inclusion of the words “fossil fuels” into the final declaration seems to be the only “advancement” it represents compared to the past. It is meaningless.

“This draft deal is not a plan to solve the climate crisis, it’s an agreement that we’ll all cross our fingers and hope for the best.” — Jennifer Morgan, executive director of @Greenpeace International #COP26Action #TheDefenderhttps://t.co/CILzmdTZ1k

What is overwhelmingly meaningful is the announcement that the two next COPs will be in Egypt and the United Arab Emirates. This means only one thing for the climate justice movement: there is no possible fiction in which any of us can actually entertain the idea that the COP is a process in any way different from the World Trade Organization and the G20.

The COP is an organization of global capitalist plans for the intensification of exploitation. It needs to be dead to us, as  our presence there legitimizes a process that is simultaneously against us and against the planet — that is why the Glasgow Agreement was created in 2020.

There are small notes of cruelty. The choice of Sharm-el-Sheik, a secluded tourist destination in Egypt, for COP-27, is the decisive spit in the grave of the revolutionaries that in 2011 took Tahrir Square, overthrew Hosni Mubarak and later were drowned in their own blood by the military dictatorship of General Sisi.

The burial site of the Arab Spring, a revolutionary wave fuelled by climate change, by drought, crop failures, by increase in food prices brought on by scarcity and competition for biofuels, was thought of, proposed and then accepted as the venue for COP27.

Almost all of us are ruled by reactionary governments that look at climate change in one of two prisms: how can I help private companies make money out of this and/or how can I make it so this isn’t a nuisance to private companies. There are governments not in these situations, but their power inside the halls is almost as little as that of activists and NGOs.

The announcement of the United Arab Emirates, a petro-state run by a kleptocratic royal family, as the next venue, is the final notification the climate justice movement received: there will be no more pretense of negotiation, influence or accountability. Even the symbolic protests raised inside the COPs and in the counter-summits are dispensable.

The movement doesn’t need to be convinced that the tactics of influencing decision-makers and making strong institutional pushes is the way forward — if historical experience had not been enough, we have now been informed. Glasgow was the last COP.

Although the climate justice moment has the historical memory of COP as a gathering moment, that is over. There will be no gathering point in Sharm-el-Sheik, no protests, no civil society, except the likely stooges that the military might set up to compose the stage.

In the United Arab Emirates women will need to bow their heads before a socially medieval state built upon the very stuff that has created climate change, a state which intends on expanding fossil production.

We don’t have time to keep on building opposing narratives to carbon markets, to carbon taxes, to net zero, to offsets — couldn’t we see for so long that these merely meant opening new frontiers of exploitation, new rounds of commodification and colonialism?

All this has been happening at the very moment when the climate is collapsing and the only thing that works is the only thing they always refused: stopping all fossil fuels. Now, they have made that decision for us. The COP procedures were a black hole for the movement and it has been closed to us.

We should have learned this in Copenhagen, when someone fiddled that the movement was dead and we danced to their tune. We should definitely have learned it when last year the COP was postponed.

We should have learned it this year, with the further practical delay, which is all the COP will ever deliver: delay, delay, delay and in the near future, regret. The process of delay was meant to and did create conformity.

That is now all behind us. Their agenda and calendar can not and will not be ours anymore.

We, the climate justice movement, need to create our own agenda and our own plans.

We, as a movement, need to be discussing our power and our own program without fear, instead of discussing the official COP and governmental plans.

We are now rid of the heavy anchor that prevented us from being the movement that will, in fact, uproot the capitalist system.

João Camargo is a climate activist in grassroots movement Climáximo in Portugal and in the Climate Jobs campaign.