‘Bombshell Report’ Says All Fossil Fuels Should Stay in the Ground

The “bombshell report from the International Energy Agency is easy to translate," said Bill McKibben. "Anyone who continues to engage or invest in fossil fuel development is wrecking the climate." 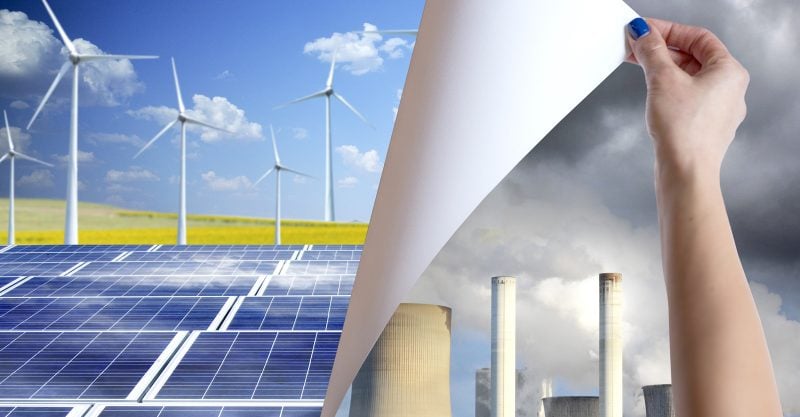 To avoid the most catastrophic effects of the climate emergency, countries around the world must immediately transition from extracting and burning fossil fuels to utilizing renewable sources like solar and wind, the International Energy Agency said Tuesday in a landmark report detailing what governments need to do to achieve a net-zero energy system by 2050.

Described by Food & Water Watch policy director Mitch Jones as “a testament to both the power of the international climate movement and the urgency of the crisis we face,” the IEA’s new report, Net Zero by 2050: A Roadmap for the Global Energy Sector, stated that there is “no need for investment in new fossil fuel supply in our net-zero pathway.”

“It’s huge to have the world’s most influential energy modelers bolstering the global call to stop licensing and financing new fossil fuel extraction,” Kelly Trout, interim Energy Transitions and Futures program director at Oil Change International, said in a statement. “Governments, banks and big oil and gas companies can no longer use the IEA as a shield to claim that their support for fossil fuel expansion is consistent with the Paris Agreement.”

While climate experts and justice advocates have long stressed the need to rapidly slash greenhouse gas (GHG) emissions to prevent the average global temperature from increasing more than 1.5°C above preindustrial levels, the new report from the IEA — historically friendly to the fossil fuel industry’s prerogatives — is particularly significant; it marks the first time the world’s leading energy policy adviser has acknowledged that existing climate pledges are woefully inadequate and that approving new coal, oil and gas projects is incompatible with drastically reducing the planet-heating pollution responsible for destabilizing Earth’s climate.

“Finally the IEA is starting to get it: If we’re to have a fighting chance of meeting the objectives of the Paris agreement, the world needs to phase out fossil fuels,” Jennifer Morgan, executive director of Greenpeace International, said in response to the IEA’s 1.5°C-aligned net-zero scenario. “We can’t even burn — or afford to burn — all the reserves we’ve currently got.”

“To avert climate catastrophe and biodiversity devastation, and to maintain an ‘unwavering policy focus on climate change in the net-zero pathway,’ governments and regulators have to act and that means an end to licensing for new oil and gas now,” Morgan added. “The IEA has spelled it out once and for all: if you’re in a hole, stop digging.”

Today’s bombshell report from the Intl Energy Agency is easy to translate: anyone who continues to engage or invest in fossil fuel development is wrecking the climate.
Or, more simply: Keep It In the Groundhttps://t.co/sGQCdiV5rn

In a statement, Anna Vickerstaff, the UK team lead at 350.org, said that “in the past, the International Energy Agency has been hesitant to call time on the fossil fuel industry — not anymore.”

“When this conservative institution is demanding an end to fossil fuels it really is time for governments to ditch the net-zero rhetoric and take immediate action to cut their support for polluting corporations,” Vickerstaff continued. “The growing call for concrete action is impossible to ignore. It’s time to end fossil fuels.”

While a growing number of countries, including major economies like the U.S. and the EU, have recently pledged to cut GHG emissions by at least 50% below 2005 levels by the end of this decade on the way to net-zero by midcentury, IEA executive director Fatih Birol told the New York Times in an interview that “the sheer magnitude of changes needed to get to net-zero emissions by 2050 is still not fully understood by many governments and investors.”

“There’s still a huge gap between the rhetoric and the reality,” said Birol, who warned last month that despite the economic slowdown caused by the COVID-19 pandemic, global GHG emissions did not decline significantly in 2020 and are on pace to increase in 2021 due to an uptick in coal burning along with lackluster green recovery policies.

Emphasizing that there is still a viable path to net-zero emissions but that it is narrow and “hinges on a singular, unwavering focus from all governments — working together with one another, and with businesses, investors and citizens — ” the IEA explained the changes required to limit global warming to 1.5°C.

The report outlined “400 milestones to guide the global journey to net-zero by 2050,” providing governments worldwide with a potential timeline to usher in an era of clean energy and stave off climate destruction. The report also stressed the need for internationally coordinated action, without which global carbon emissions “will not fall to net-zero by 2050.”

“For many rich countries, achieving net-zero emissions will be more difficult and costly without international cooperation,” the report noted. “For many developing countries, the pathway to net-zero without international assistance is not clear. Technical and financial support is needed to ensure deployment of key technologies and infrastructure.”

The report stated that “to reach net-zero emissions by 2050, annual clean energy investment worldwide will need to more than triple by 2030 to around $4 trillion,” something the IEA said would “create millions of new jobs.” To take one example, quadrupling global solar power by 2030 “is equivalent to installing the world’s current largest solar park roughly every day” for the rest of the decade.

“The clean energy transition is for and about people,” said Birol in a statement. “Our roadmap shows that the enormous challenge of rapidly transitioning to a net-zero energy system is also a huge opportunity for our economies.”

“The transition must be fair and inclusive, leaving nobody behind,” Birol added, alluding to the objective of meeting the needs of the nearly 800 million people who lack electricity and the 2.6 billion who lack clean cooking solutions. “We have to ensure that developing economies receive the financing and technological know-how they need to build out their energy systems to meet the needs of their expanding populations and economies in a sustainable way.”

While the report noted that decarbonizing the global economy in the span of three decades necessitates “the massive deployment of all available clean energy technologies — such as renewables, electric vehicles, and energy efficient building retrofits — between now and 2030,” the IEA also called for substantially increasing and reprioritizing research and development because “in 2050, almost half the reductions come from technologies that are currently only at the demonstration or prototype phase.”

Although the report’s call for halting investment in fossil fuels won praise from progressive advocates, the fact that the IEA’s emissions reduction roadmap after 2030 relies heavily on nonexistent technologies such as carbon capture, utilization and storage (CCUS) elicited criticism.

“Gambling the climate on a 4,000% increase in carbon capture and storage by 2030 is extraordinarily risky and, the IEA’s own analysis shows, not necessary,” said David Tong, a senior campaigner at Oil Change International. “Instead of banking on a consistently underperforming and still polluting technology, the IEA should be accelerating the phase-out of fossil gas and coal by relying on proven wind and solar solutions.”

“We need the IEA to be a beacon pointing the way to a truly clean, Paris-aligned future,” Tong added. “With today’s report, that light is starting to appear, but it is not yet shining as bright as it must.”

In addition, Landry Nientereste, the Africa managing director at 350.org, warned that “net-zero” — which allows companies like Shell and BP to “offset” their carbon emissions by planting trees  —  “is being used by the world’s biggest polluters and governments as a façade to evade responsibility and disguise their inaction or harmful action on the climate crisis.”

“There is a growing risk,” Nientereste said, “that reports such as these are shifting the narrative away from the rapid and ‘real’ emissions reductions that climate justice requires.”