"This draft deal is not a plan to solve the climate crisis, it's an agreement that we’ll all cross our fingers and hope for the best," said Jennifer Morgan, executive director of Greenpeace International. 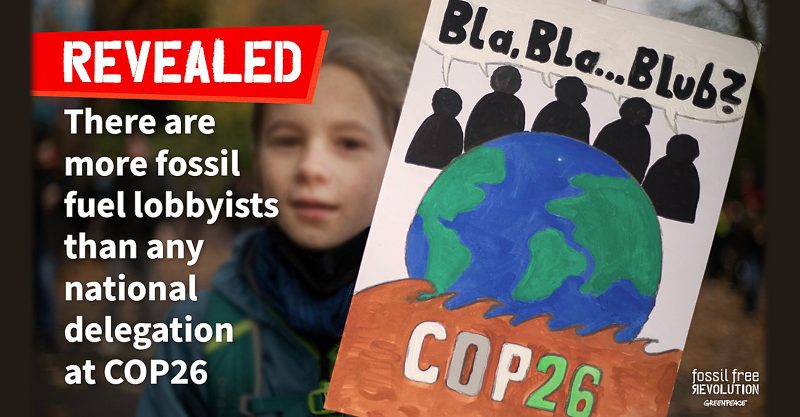 A new COP26 draft decision text unveiled Wednesday was roundly panned by climate campaigners as badly inadequate to the task of slashing global greenhouse gas emissions, which are pushing the planet toward a catastrophic 2.4°C of warming by the end of the century.

“This draft deal is not a plan to solve the climate crisis, it’s an agreement that we’ll all cross our fingers and hope for the best,” Jennifer Morgan, executive director of Greenpeace International, said in response to the fresh document, the details of which world leaders are set to hash out in the final days of the pivotal summit in Glasgow, Scotland.

‘This is greenwashing!’ @GretaThunberg calls out @shell @bp_plc and the big banks’ #COP26 carbon offsetting panel.

Carbon offsetting is *not* the solution to the climate crisis.

Far from a concrete and ambitious plan to transition away from fossil fuel use in line with increasingly dire scientific projections, Morgan argued that the new draft text amounts to a “polite request that countries maybe, possibly, do more next year.”

“Well that’s not good enough, and the negotiators shouldn’t even think about leaving this city until they’ve agreed to a deal that meets the moment. Because most assuredly, this one does not.

“The text needs to be much stronger on finance and adaptation and needs to include real numbers in the hundreds of billions, with a delivery plan for richer countries to support less-developed nations.

“And we need to see a deal that commits countries to coming back every year with new and better plans until together they get us over the bar and we can stay below 1.5°C of warming.

“And while the text calls for an accelerated phase-out of coal and fossil fuel subsidies, wreckers like the Saudi and Australian governments will be working to gut that part before this conference closes. Ministers now have three days to turn this around and get the job done.”

The draft text calls on countries to toughen their pledges to cut carbon pollution, urging them to “revisit and strengthen the 2030 targets in their nationally determined contributions, as necessary to align with the Paris Agreement temperature goal by the end of 2022.”

But as it stands, the seven-page document is light on specifics and binding commitments, pressing countries to “accelerate the phasing-out of coal and subsidies for fossil fuels” without offering a timeline and vaguely nodding toward “the urgency of making finance flows consistent with a pathway towards low greenhouse gas emissions.”

Cansim Leylim of 350.org pointed out that “this the first time fossil fuels are named in 25 years of U.N. climate negotiations, and that is a huge testament to the people power and grassroots actions that have pushed continuously for the end of fossil fuels.”

As Reuters reported, the draft “asks countries to submit improved pledges next year, but does not confirm if this will become an annual requirement — potentially leaving a decision on future reviews to Egypt, which will host the next U.N. climate conference.”

“The draft’s call to halt subsidies for fossil fuels is also likely to face pushback from big producers,” Reuters added. Fossil fuel lobbyists have a larger presence at COP26 than any single country, according to an analysis released earlier this week by the humanitarian group Global Witness.

The COP26 draft was released just hours after new research from climate policy experts warned that even if countries meet their current pledges — including those made thus far in Glasgow — “global greenhouse gas emissions in 2030 will still be around twice as high as necessary for the 1.5°C limit.”

“With 2030 pledges alone — without longer-term targets — global temperature increase will be at 2.4°C in 2100,” the experts behind the Climate Action Tracker (CAT) found.

“The projected warming from current policies (not proposals) — what countries are actually doing — is even higher, at 2.7°C with only a 0.2°C improvement over the last year and nearly one degree above the net-zero announcements governments have made.”

Pointing to the new CAT study, Morgan of Greenpeace International noted that the central task of COP26 was to craft climate policies to limit warming to 1.5°C by the end of the century, the more ambitious goal of the Paris Agreement.

If the new COP26 draft text “is the best [world leaders] can come up with,” said Morgan, “then it’s no wonder kids today are furious at them.”