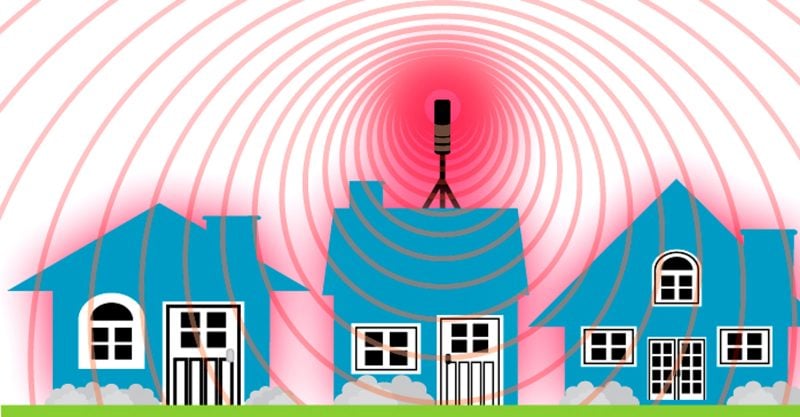 On Feb. 26, Children’s Health Defense (CHD) filed a new lawsuit against the Federal Communications Commission (FCC) challenging the adoption of a rule that would allow people to install wireless transmitting antennas on their homes without notifying neighboring properties. The suit was filed in the U.S. Court of Appeals in the DC Circuit.

At issue is an amendment to the “Over-the-Air Reception Devices” rule (“OTARD”) that would deprive people of the opportunity to object to the installation of wireless transmitting antennas on neighboring homes.

The rule, set to take effect March 29, would facilitate the fast deployment of 5G and 1,000,000 SpaceX’ Satellite antennas and create super Wi-Fi mesh networks in urban and rural areas.

CHD’s lawsuit, filed under the Administrative Procedure Act, asserts that the FCC’s amended OTARD rule violates constitutional rights and upends long-standing common law personal and property rights. The suit alleges that the amended rule leads to due process violations, is arbitrary, represents an abuse of discretion and was passed without authority and statutory jurisdiction.

OTARD allows private property owners to place fixed point-to-point antennas supporting wireless service on their property and, for the first time, to provide wireless data/voice services, including 5G, to users on neighboring properties by connecting a “hub” or “relay” designed to transmit the signal onto neighboring properties.

The only limitation imposed on property owners is the size of the antenna: Under the amended rule, the diameter of the antenna should not exceed 1 meter (approximately 3 feet).

The amended rule will not directly allow placement of “personal wireless service” (e.g., traditional mobile service) antennas, although it can effectively achieve the same outcome.

Scott McCollough, an attorney representing CHD in the case, said that while this distinction is important, “it does not mean that the rule change will have insignificant effects. To the contrary, the fixed wireless can be used to support private mobile service (3G, 4G, 5G) and it will allow for significant expansion of wireless services.”

OTARD eliminates all state and local zoning authority over these antennas. No permit is required. No notice to neighboring properties owners is required. And homeowners’ association and deed restrictions and any other state laws are preempted.

As a result, those affected will have no right to object to or prevent installation of the antennas, even though they will be involuntarily exposed to harmful radiofrequency radiation.

As public awareness about wireless harms grows, communities are working with their municipalities to adopt ordinances that will keep antennas away from their homes, residential neighborhoods and schools. OTARD will severely undermine the effectiveness of these efforts.

“This rule will create a wireless ‘wild west.’ Because of the extensive preemptions and how easy OTARD makes it to install antennas to propagate the signals, the rule will likely lead to the most significant and fastest proliferation of 5G by using homes and private properties for the deployment.”

The new rule also preempts federal and state civil rights laws that protect the disabled. Sickness from wireless is widespread. Those who have already been injured by wireless devices and infrastructure, such as Wi-Fi and cell towers, will not be entitled to accommodation, which could force some families out of their homes in order to protect themselves. Under OTARD, even rural areas will no longer be safe

CHD’s petition was joined by four individual petitioners, including a physician and parents of five children who have been injured by wireless radiation.

“This rule is an unprecedented and intolerable attack on our rights and constitutional protections,” Tachover said. “From the moment we became aware that the FCC intended to adopt this rule, it was clear to us that allowing it to go into effect without a challenge was not an option.”

CHD started its campaign against OTARD and laid the ground for a lawsuit in April 2020, when the organization filed a 22-page letter with the FCC. The letter was joined by a record number of 15,090 people. Of those, 6,231 people declared that they and/or their children have become injured by wireless radiation.

More than 2,500 people added personal comments, many of them substantive, with heartbreaking testimonials of sickness and death caused by wireless radiation. Parents wrote about their children’s sickness with cancer, radiation sickness and the aggravating effects wireless has on the autism symptoms of their children and on seizures. They said they fear the devastating effects the adoption of OTARD will have on their lives.

Still, despite these widespread objections from municipalities, homeowners’ associations and the conference of mayors, the FCC adopted the rule.

“This new rule is draconian” said Robert F. Kennedy, Jr., CHD chairman and chief legal counsel. “It is an unprecedented attack on our most basic constitutional rights, and without authority or due process, preempts disability laws that are a cornerstone of a moral society.

“Our children are already suffering terrible illnesses from this radiation. This rule has the potential to devastate the lives of families who will have nowhere to go to escape this radiation. The FCC’s disregard for the public interest is rising to new heights every day. CHD is committed to lead the efforts to hold the FCC and our government accountable and defend the public interest, health and our children.”

This is the second case CHD filed against the FCC. The first case, filed in February 2020, challenges the FCC’s obsolete health and safety guidelines regarding 5G and wireless radiation. The case is now awaiting the court’s decision.