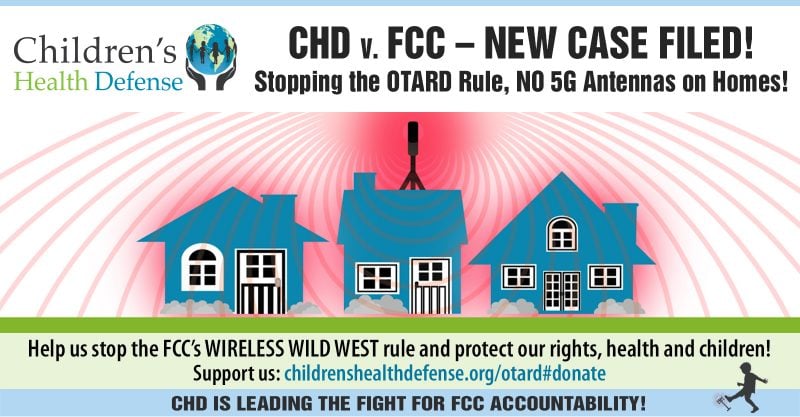 Children’s Health Defense (“CHD”) filed a lawsuit against the Federal Communications Commission (“FCC”), challenging the amendment to the “Over-the-Air Reception Devices” rule (“OTARD”) that was adopted on 1/7/2021. The case was filed in the US Court of Appeals of the DC Circuit.

OTARD allows private property owners to place fixed point-to-point antennas supporting wireless service on their property and, for the first time, to extend wireless data/voice services including 5G and satellites, to users on neighboring properties. It enables installation of harmful radiation transmitting antennas on homes.

The most insidious aspect of OTARD is that it eliminates all state and local zoning authority over these arrangements. No permit is required, deed and homeowners’ association restrictions or any other state laws are preempted. No notice to neighboring property owners is required. Therefore, people adversely affected will have no right to object or prevent these antennas’ installation, even though they will be involuntarily exposed to harmful radiation.

In April 2020, CHD filed a letter with the FCC against the rule. The letter was joined by 15,090 people, of them, 6,231 declared that they and/or their children have become injured by wireless radiation.

“This rule allows a wireless ‘Wild West,’ and will cause irreparable harm to the many who have already become injured by wireless” says Dafna Tachover, CHD’s 5G and wireless harms project director. Because OTARD preempts federal and state civil rights laws that protect the disabled, those injured will not be able to obtain accommodations and families will be forced out of their homes with nowhere to go.

CHD’s Petition was joined by four individual petitioners, including a physician and parents of five children who have been injured by cell towers and Wi-Fi.

The Petition was filed under the Administrative Procedures Act. It asserts that the FCC’s adoption of OTARD violates constitutional rights, leads to due process violations, that it is arbitrary, an abuse of discretion and that it passed without authority and statutory jurisdiction.

“We had to file this case to stop this draconian law and to keep antennas away from homes and children,” says Robert F. Kennedy Jr., CHD’s Chairman.

This is the second case CHD is leading against the FCC. Its case challenging the FCC health and safety guidelines regarding 5G and wireless radiation is now awaiting a court decision.