RFK, Jr. Tells Health Freedom Advocates: ‘This Is the Hill We Will Die On’ 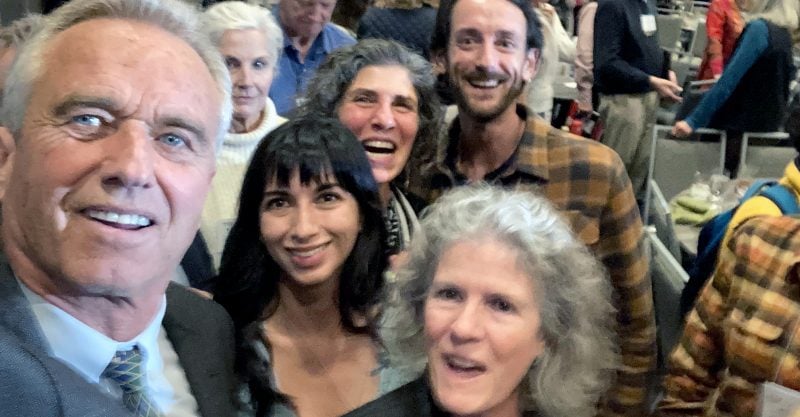 Roughly 1,200 enthusiastic and motivated participants attended the Nov. 5-7 event, coming from all over the U.S. and internationally to explore the theme of “Staying Healthy in a Toxic World.” In addition, almost 400 participated via livestream.

With vaccine sites across the country beginning to inject children with Pfizer’s COVID shot on the same day Kennedy and Holland spoke, both emphasized the time has come to “resist tyranny with every fiber of our being.”

Holland described the urgency of “keeping the light of the human spirit, human rights and democracy alive” and underscored that “this is about the world we give to our children.”

Kennedy said, “Ordinarily, I don’t ask people to quit their jobs and make a spectacle of themselves.”

However, with the global assault on children and freedom that is now underway, the calculus has changed, Kennedy told the audience. “There are worse things than death — this is the hill we die on.”

In his keynote address, “When Money Intersects Public Health Policy,” Kennedy forcefully criticized the flawed decisions by the U.S. Food and Drug Administration (FDA) and Centers for Disease Control and Prevention (CDC) to authorize Pfizer’s experimental COVID vaccine for 5- to 11-year-olds.

Describing an ever more rapacious pharmaceutical industry, Kennedy noted while Pfizer’s COVID shots pose disproportionate risks to children, pharma is eager to extend its liability protections by getting the jab onto the liability-free childhood vaccine schedule.

In recent speeches, Kennedy recalled the notorious experiments carried out in the 1960s by Stanley Milgram who found, disturbingly, that about two-thirds of ordinary individuals will, “under the direction of an authority figure … obey just about any order they [are] given.”

As Kennedy details in his forthcoming book, “The Real Anthony Fauci,” the white-coated National Institutes of Health (NIH) bureaucrat is a “dangerous charlatan” who has, for decades, been only too happy to serve as the nation’s powerful Milgram-like authority figure.

Acknowledging the Weston A. Price Foundation’s viewpoint that modern technology “should be harnessed as a servant to the wise and nurturing traditions of our ancestors rather than used as a force destructive to the environment and human health,” Kennedy emphasized the importance of true wisdom in all its spiritual dimensions.

In discussing the wider threats to freedom that Americans are now facing, Kennedy also invoked the famous 1961 speech by President Eisenhower who warned Americans about the dangers of the powerful military-industrial complex.

When America had an opportunity to reap a “peace dividend” after the fall of the Soviet Union in 1989, the military-industrial-medical-pharmaceutical complex invented new enemies to retain control over the “dividend” — including conveniently invisible viral threats.

In her speech, “Where Are We Headed and What Can We Do About It?” Holland characterized the push to inject children as “child sacrifice” — with tyrants and pharma “going after all the children in the world.”

In the U.S. alone, Holland said, the government pre-purchased 65 million doses of Pfizer’s pediatric vaccine, making it clear the FDA and CDC vaccine authorization process was a sham.

Holland cautioned that even as a “very fast train” pushes out the COVID shots to young children via pediatricians, pharmacies and schools, so-called experts have also been laying the groundwork for elimination of parental consent requirements.

In an opinion piece published in July in JAMA Pediatrics, three Ivy League authors with legal, public health and bioethics expertise openly made the case that “State laws should … authorize minors to consent to COVID-19 vaccination without parental permission.”

Ominously, the authors even suggested “judicial intervention” could be appropriate in situations involving younger children.

Induction of mass psychosis through manipulation of fear has played a critical role in getting the public to accept mass experimentation on children, Holland suggested.

While this is alarming in and of itself, Holland also emphasized the importance of seeing the “big picture”: a centralization and control agenda being implemented in lockstep around the world, facilitated by coordinated efforts across pharma, medicine, finance, tech and the military-industrial-intelligence complex.

To illustrate her point, Holland cited telling remarks by the world’s largest asset manager about how “markets like totalitarian governments.” She also noted top central bankers’ enthusiasm for the controls and enforcement made possible by central bank digital currencies.

The Weston A. Price Foundation’s mission — to restore nutrient-dense foods to the human diet through education, research and activism — encompasses activities and resources intended to help parents and parents-to-be raise healthy children.

Those resources include providing information about “the most important decision parents will ever make: whether or not to vaccinate their child.”

The mission of the foundation, founded in 1999 by Sally Fallon Morell, meshes well with CHD’s focus on ending childhood health epidemics by working aggressively to eliminate harmful exposures, hold those responsible accountable and to establish safeguards to prevent further harm.

Weston Price has a well-established network of local chapters, and CHD’s chapter network is growing.

For those who wish to join in the effort to vanquish totalitarianism, reaching out to these networks may be a good place to start. The two organizations are actively seeking ways to work together more closely on addressing the threats to our children’s health.