Earlier this month, Politico published a special report based on four dozen interviews with U.S. and European officials and global health specialists, who admit Bill Gates is running the global COVID-19 response. 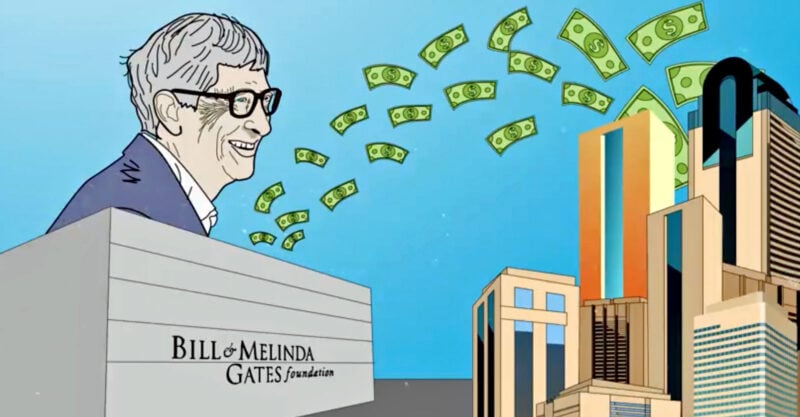 The idea that Bill Gates exerts undue influence over global health has consistently been denied and dismissed as a loony conspiracy theory. But as with so many other things, this conspiracy theory is now turning out to be a conspiracy fact.

On Sept. 14, Politico published an extensive special report based on “four dozen interviews with U.S. and European officials and global health specialists,” headlined, “How Bill Gates and His Partners Took Over the Global COVID Response.”

As noted by Igor Chudov on Substack, within hours the headline was edited to read: “How Four Private Groups Used Their Clout to Control the Global COVID Response — With Little Oversight,” as illustrated in Chudov’s screen capture below.

Curiously, five hours after that edit, Politico changed the headline back, so at the time of this writing, it reads: “How Bill Gates and Partners Used Their Clout to Control the Global COVID Response — With Little Oversight.”

The only word now missing from the original headline is “his.” You can see how the headline shifted back and forth over the course of 15 hours on archive.today.

According to Politico, four health organizations — the Bill & Melinda Gates Foundation, GAVI, the Coalition for Epidemic Preparedness Innovations, or CEPI, and the Wellcome Trust — rapidly took a lead in the global pandemic response, and while all four claim to be independent organizations, they’re all actually founded and/or funded by Gates.

“When COVID-19 struck, the governments of the world weren’t prepared,” Politico writes.

“While the most powerful nations looked inward, four non-governmental global health organizations began making plans for a life-or-death struggle against a virus that would know no boundaries.

“What followed was a steady, almost inexorable shift in power from the overwhelmed governments to a group of non-governmental organizations, according to a seven-month investigation by POLITICO journalists based in the U.S. and Europe and the German newspaper WELT.

“Armed with expertise, bolstered by contacts at the highest levels of Western nations and empowered by well-grooved relationships with drug makers, the four organizations took on roles often played by governments — but without the accountability of governments.”

During the earliest days of the outbreak, while governments were still debating the seriousness of it, the Bill & Melinda Gates Foundation, GAVI, CEPI and the Wellcome Trust began a coordinated effort to identify vaccine makers, fund tests, drug treatments and mRNA shots and develop a global distribution plan in collaboration with the WHO.

In a sidebar, Politico highlights six key takeaways from their investigation:

“1. The four organizations have spent almost $10 billion on COVID since 2020 – the same amount as the leading U.S. agency tasked with fighting COVID abroad.

“2. The organizations collectively gave $1.4 billion to the World Health Organization, where they helped create a critical initiative to distribute COVID-19 tools. That program failed to achieve its original benchmarks.

“3. The organizations’ leaders had unprecedented access to the highest levels of governments, spending at least $8.3 million to lobby lawmakers and officials in the U.S. and Europe.

“4. Officials from the U.S., EU and representatives from the WHO rotated through these four organizations as employees, helping them solidify their political and financial connections in Washington and Brussels.

“5. The leaders of the four organizations pledged to bridge the equity gap. However, during the worst waves of the pandemic, low-income countries were left without life-saving vaccines.

“6. Leaders of three of the four organizations maintained that lifting intellectual property protections was not needed to increase vaccine supplies – which activists believed would have helped save lives.”

As detailed by Politico, through Gates’ lobbying and financial might, the international response to COVID-19 rapidly shifted from individual governments to “a privately overseen global constituency of nongovernmental experts.”

In the U.S., president Biden has earmarked $500 million to CEPI alone in his $5 billion COVID-19 budget, which has yet to be approved by Congress.

But, as noted by Kate Elder, a senior vaccines policy adviser for the Doctors Without Borders’ Access Campaign:

“What makes Bill Gates qualified to be giving advice and advising the U.S. government on where they should be putting … tremendous resources?”

“I think we should be deeply concerned. Putting it in a very crass way, money buys influence. And this is the worst kind of influence.

“Not just because it’s money — although that’s important, because money shouldn’t dictate policy — but also, because it’s preferential access, behind closed doors.

Gates ‘owns’ the WHO

Many have pointed out that Gates, through his billions in donations to the WHO, has significant leverage over the WHO’s decisions.

In September 2021, Astrid Stuckelberger, Ph.D., a WHO insider, blew the whistle on Gates, explaining how the WHO is, in fact, controlled by Gates, who in turn dictates policy for his own personal financial benefit.

Of the four organizations Politico focuses on, GAVI, the Vaccine Alliance, may be the most important.

GAVI, founded by Gates, is headquartered in Switzerland.

Equally strange is the fact that they’re completely tax-exempt. GAVI can basically do whatever it wants without any repercussions.

Police can’t even investigate or collect evidence from GAVI were they to be implicated in a criminal investigation.

That’s how well-protected they are. And, according to Stuckelberger, GAVI is the entity that is really directing the WHO.

According to Stuckelberger, Gates did, in 2017, request to be put on the WHO’s executive board — like a member state — ostensibly because he gives them so much money.

There’s no evidence that Gates was ever officially granted the status of a member state, but it appears he figured out an alternative power play.

Stuckelberger pointed out that Gates and the WHO entered into a three-way contract agreement with Swissmedic, the food and drug administration of Switzerland, which is highly unusual.

So, essentially, when Gates did not get voted in as a one-man nation-state, he created three-party contracts with member states and the WHO, essentially placing him on par with the WHO!

One curiosity that supports the idea that Gates is either the real power behind the WHO, or has the same amount of power as the WHO, is the fact that Gates has repeatedly been the first to announce what the world needs to do to address the pandemic, and then the WHO would come out with an identical message that member states then had to follow.

But who the heck is Gates to direct global health and pandemic responses?

He has no medical training. He’s completely unqualified to speak to any health issues whatsoever. He didn’t even graduate college. And he’s never been elected to represent the people in any capacity.

Basically, what we have here is one wealthy individual who figured out a way to unofficially monopolize the decision-making ability of a global health authority in order to enrich himself, which is beyond crazy.

The WHO was instrumental in Gates’ rise to power

Gates’ influence over the WHO is undoubtedly why the WHO allowed these four Gates-funded groups to direct the global response to COVID-19 in the first place.

As reported by Politico:

“The WHO was crucial to the groups’ rise to power. All had longstanding ties to the global health body. The boards of both CEPI and Gavi have a specially designated WHO representative.

“Much of the groups’ clout with the WHO stems simply from money. Since the start of the pandemic in 2020, the Gates Foundation, Gavi and the Wellcome Trust have donated collectively more than $1.4 billion to the WHO — a significantly greater amount than most other official member states, including the United States and the European Commission, according to data provided by the WHO.”

It would be one thing if these organizations actually did an excellent job. But they didn’t.

An independent review by Dalberg Global Development Advisors, a New York policy advisory firm, found the initiative created by Gates’ groups, the Access to COVID-19 Tools Accelerator, or ACT-A, failed on all fronts.

Similarly, of the 2 billion COVID-19 shots that were supposed to be delivered by the end of 2021, only 319 million doses were delivered.

Of course, one could argue that failure to deliver fraudulent CPR tests and dangerous treatments and mRNA shots were a blessing in disguise.

But the fact remains that these organizations are far from excellent and fail miserably in reaching many of their stated goals.

They overpromise and underdeliver. They’re willing to sacrifice lives to maintain control over moneymaking patents.

And, while they’re more or less singlehandedly shaping the global response to pandemics, there’s no one to hold them to account for their performance.

What Politico left out

While Politico’s report is sweeping in breadth, it still failed to include a number of important puzzle pieces listed in Chudov’s Substack article.

As noted by Chudov in his closing remarks:

“Nevertheless, the mere publication of this article has huge importance. The things that most of us know and talk about, are appearing in the so-called ‘mainstream press’ — after the damage was all done, of course.

“The virus was released; millions died; over a billion young people were force-vaccinated under false pretenses. When it is too late to change anything, Politico is finally stating the obvious. Still, it is better than nothing.

“Almost everything in the Politico article was known a year ago. Where was Politico then? Busy taking government COVID vaccine advertising money. The pandemic was a crime, not an accident.”

The Gates-Fauci scheme to vaccinate the world

Gates is far from the only nemesis in this orchestrated drama, however. Dr. Anthony Fauci is another key player. Ironically, Gates claims he’s “taken the brunt of COVID conspiracy abuse” because Europeans are not familiar with Fauci.

“It was quite a phenomenon; here in the U.S., it focused on myself and Tony Fauci, and internationally it was more just me because they didn’t know who Tony was — he really missed out on that!”

But while Gates tries to pass off people’s concerns about his undue influence over their health as a joke, there’s no shortage of evidence that he really is pulling strings he’s far from qualified to pull.

In “Bill Gates Lays Out Plan for Global Takeover,” I review Gates’ role in the WHO and the WHO’s plan to, ultimately, seize control over all health care decisions, worldwide.

I’ve also reviewed how Gates and Fauci have collaborated, forming a formidable public-private partnership that wields incredible power over the American public.

As early as 2000, Fauci and Gates formed an agreement to control and expand the global vaccine enterprise, which in 2021 culminated in a plan to inject every man, woman and child on the planet with an experimental COVID-19 shot.

The video above summarizes their joint scheme.