Biden’s ‘Test to Treat’ Plan a Windfall for Pfizer, Merck — But Bad for Patients, Doctors Say

President Biden on Tuesday announced a new “Test to Treat” initiative which will allow Americans who test positive for COVID-19 to obtain free antiviral pills directly from pharmacies. Pfizer and Merck will reap billions from the taxpayer-funded plan, but doctors criticized the initiative. 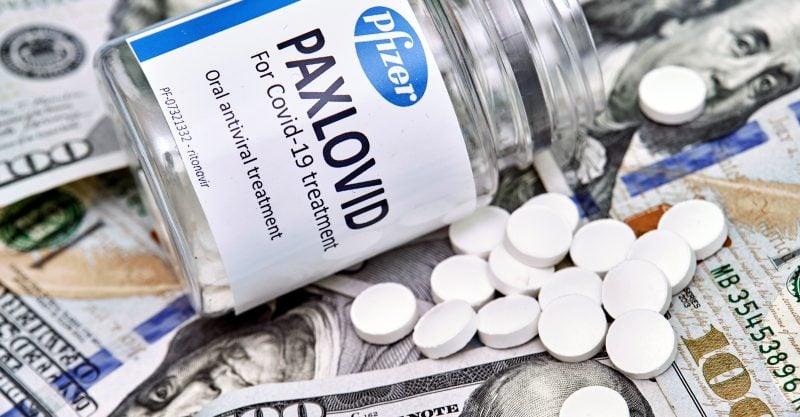 President Biden on Tuesday announced a new “Test to Treat” initiative during his State of the Union address which will allow Americans who test positive for COVID-19 at a pharmacy to obtain free antiviral pills “on the spot.”

Biden said the new initiative is a ​​key part of a revamped national strategy to return the country to normal.

But what he didn’t say is that the initiative is also a windfall for pharmaceutical companies like Pfizer and Merck.

Pfizer stands to make $54 billion in sales from its vaccine and antiviral COVID pill, Paxlovid. Merck expects to make up to $7 billion in profits from molnupiravir, a drug whose research and development was funded by taxpayers.

Biden said he ordered “millions of pills” from Pfizer, paid for by U.S. tax dollars, to allow them to be passed out “for free.”

“If you get Covid-19, the Pfizer pill reduces your chances of ending up in the hospital by 90%,” Biden said. “I’ve ordered more pills than anyone in the world has. Pfizer is working overtime to get us a million pills this month and more than double that next month.”

The federal government in June 2021 signed a $1.2 billion contract with Merck for 1.7 million courses of molnupiravir, even though the experimental treatment was still in clinical trials.

Merck on Feb. 8 announced a new contract, showing the government upped its commitment, agreeing to purchase 3.1 million courses of the drug, with the option to purchase more.

A White House official, who preferred to remain anonymous, told The New York Times hundreds of “one-stop shops” in March will open across the U.S. in retail locations including CVS, Walgreens and Kroger, with plans to grow the program over time.

“The Test to Treat Initiative will also include new actions to educate the public about the availability of new treatments and the importance of starting them soon after the onset of symptoms, provide information to health care providers about these new treatments and distribute antiviral pills directly to long-term care facilities,” the official said.

1/2
Biden just promised that people could get a test at a drugstore and if positive, they could get a ($700) medicine for free to treat their COVID. Meaning Pfizer’s or Merck’s drugs; the USG bought plenty of each.

Nass also expressed concern Biden’s plan allows people to bypass medical doctors, who are tasked with warning patients about the risks of these “genotoxic” drugs.

2/2
Think about this. Biden promises if COVID positive you get treated free, without a doctor. Without a learned intermediary to warn you about the risks of the Merck’s genotoxicity drug that can cause mutations.
Ongoing demolition of medicine

“Are physicians going to let our government directly treat patients at so-called “one-stop shops” with yet-to-be-approved agents?” Setty asked. “Not for long.”

“Doctors care deeply about their patients’ health. Once we as physicians take an open look at the breadth of this overreach we will put up stiff resistance. Despite the erosion of trust the public has for the medical system, people still trust doctors’ opinions more than the bureaucrats who are openly colluding with Big Pharma. This plan will backfire in our government’s face for all to see.

“The president’s “test-to-treat” scheme will result in the continued widespread use of rapid tests. The indiscriminate use of these imperfect diagnostic tools has been shown by the FDA’s own analysis to do one thing: exaggerate case counts and prolong a pandemic that is, by all accounts, over. This is a desperate attempt to squeeze yet more taxpayer money into the pockets of the Pharmaceutical cartel while exposing millions of people to the unknown risk of their unapproved products.”

The Defender in January published an in-depth analysis of the repercussions of the widespread use of rapid antigen tests.

“With testing and ‘treatment’ made readily available to the public, we should expect that there will be many who choose to participate simply for reassurance. This will inevitably lead to the needless testing of the asymptomatic and will extend this pandemic nightmare.”

Robert F. Kennedy, Jr., CHD chairman and chief legal counsel, told The Defender taxpayers are paying billions for vaccines that don’t work, they get COVID anyway and then they pay billions more for an inferior treatment.

“Pfizer is getting fat while Americans get sicker and poorer,” Kennedy said. “The president needs to stop listening to Pharma lobbyists and advisors and do his own research on public health.”

Merck’s molnupiravir, sold under the brand name Lagevrio and developed with Ridgeback Biotherapeutics, is an antiviral medication that inhibits the replication of certain RNA viruses, including SARS CoV-2.

As The Defender reported in December, when Merck filed for EUA of molnupiravir, its study suggested the drug reduced the risk of hospitalization by 50%. But updated data showed only a 30% reduction in hospitalizations among additional participants.

Many members of the FDA’s advisory committee at the time weighed the risks and benefits of a drug, with several committee members recommending Merck’s EUA be revisited and potentially withdrawn if another treatment becomes available later.

Dr. Sankar Swaminathan, physician, professor and chief of infectious diseases at the University of Utah, voted against granting EUA to Merck’s drug. Swaminathan said more research was needed on how the drug will affect human DNA and the potential for it to cause birth defects.

“Even if the probability is very low, 1 in 10,000 or 100,000, that this drug would induce an escape mutant from which the vaccines we have do not cover, that could be catastrophic for the whole world actually.”

“You are putting a drug into circulation that is a potent mutagen at a time when we are deeply concerned about new variants. I can’t imagine doing anything more dangerous…. If I were trying to create a new and more dangerous virus in humans, I would feed a subclinical dose [of molnupiravir] to people infected.”

Nass said even if molnupiravir reduced hospitalizations by 30%, it is less useful than monoclonal antibodies and works “nowhere near as well as multiple other drugs for COVID.”

Nass said molnupiravir’s mechanism of action is inducing mutations — in viruses, but “maybe in us too, as postulated by several FDA committee members.”

“It’s simply another dangerous drug that will help the federal health agencies look like they are doing something while doing nothing to curtail the pandemic,” Nass said.

“And because it is being authorized, instead of being licensed, anyone injured by the drug cannot sue for damages and is unlikely to collect any benefits.”

Studies have shown the safety and efficacy of inexpensive drugs, such as oral hydroxychloroquine and povidone-iodine throat spray and ivermectin and doxycycline monotherapy, for treating COVID.

According to a study on Cornell University’s preprint website, researchers used computational analyses to evaluate the performance of 10 medications against the Omicron variant.

They found ivermectin outperformed all of them, including Pfizer’s Paxlovid which cost taxpayers $5.29 billion and costs $529 per course of treatment.

In other words, Pfizer’s billion-dollar drug received EUA despite the availability of a similar drug proven to be more effective and which is cheaper.

Ivermectin has been shown to reduce the viral load by inhibiting replication, reduce infection by 86% when used preventively, reduce recovery time, protect against organ damage, lower the risk of hospitalization and death. It costs between $48 and $95 for a course of treatment depending on location.

Ivermectin is also exponentially cheaper than molnupiravir, but due to generic drug substitution rules at pharmacies, Merck — which also manufactures ivermectin — could spend millions of dollars to get a COVID indication for ivermectin and then effectively get zero return.

“What company would ever make that investment?” asked David Henderson, senior fellow with the American Institute for Economic Research, and Charles Hooper, president and co-founder of Objective Insights, Inc., during the FDA’s December 2021 meeting to authorize molnupiravir.

“Ivermectin is an old, cheap, off-patent drug. Merck will never make much money from ivermectin sales,” they said.

“We plan on giving money to a drug company for a drug that is in no way going to surpass what we already have available right now and can be used. That money should instead be given to supply ivermectin to the country. This is a colossal waste of taxpayer money.”

American taxpayers funded the development of molnupiravir through a $19 million grant from the National Institute of Allergy and Infectious Diseases. Merck’s cost to produce one molnupiravir treatment is $17.74 — but the U.S. government agreed to pay $712 per treatment.

One concern with passing out antiviral COVID pills at the “one-stop-shops” opening across the U.S. is the increased probability of someone receiving a false positive COVID test — and unnecessarily taking an experimental medication that could cause harm.

The FDA on Tuesday issued a warning about three rapid COVID tests the agency said should not be used because of the potential for producing false results.

The three tests are:

“The FDA is concerned about the risk of false results when using” those tests, the agency said. These tests have “not been authorized, cleared or approved by the FDA for distribution or use in the United States.”

A study published on Jan. 7 in the Journal of the American Medical Association revealed more than 40% of the positive results from a large sample of rapid antigen tests were false positives.

Out of 1,322 positive rapid test results, 1,103 individuals were asked to take a polymerase chain reaction (PCR) test to confirm the results. The study found 462 (or 42%) of the 1,103 positive test results were false.

“These results inform the discussion of whether rapid antigen tests will result in too many false positives that could overwhelm PCR testing capacity in other settings,” the researchers wrote.

Researchers said tests administered too early or late in the infectious state, or being done incorrectly, could contribute to false-positive results.