President Biden is expected to announce today he will impose new vaccination mandates as part of a plan to “return to normal.” When asked if the plan would have an immediate and broad effect on Americans, the White House told reporters: “It depends on if you’re vaccinated or not.” 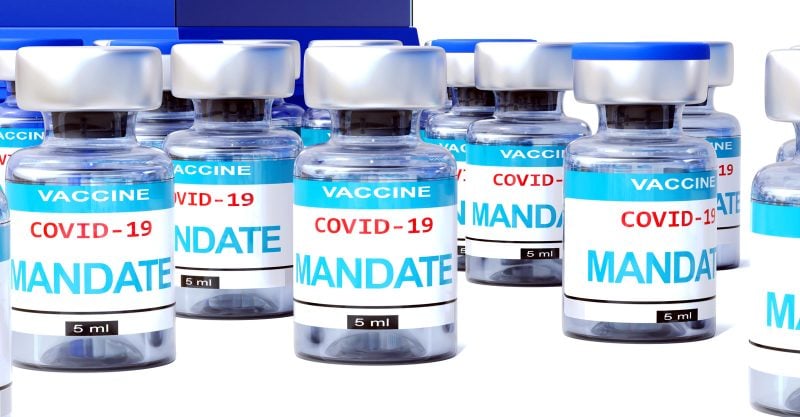 President Biden is expected to announce later today he will impose new vaccine mandates as part of a broad plan to put pressure on private businesses, federal agencies and schools to enact stricter vaccination and testing policies.

According to The New York Times, Biden, who was briefed by his team of COVID advisors Wednesday, will address six areas where his administration can push eligible Americans to receive vaccines.

Two officials familiar with the plan said it would include new federal requirements for vaccination, and that its underlying message would be that the only way to return to some sense of normalcy is to get as many people vaccinated as possible.

A White House official said the six pillars Biden will discuss include:

When asked if Biden will add more detail to existing policies or would outline measures that would have an immediate and broad effect on Americans, White House Press Secretary Jen Psaki told reporters: “It depends on if you’re vaccinated or not.”

“He’s going to outline the next phase in the fight against the virus and what that looks like, including measures to work with the public and private sector, building on the steps we’ve already announced, the steps we’ve taken over the last few months: requiring more vaccinations, boosting important testing measures and more; making it safer for kids to go to school all at a time when the American people are listening,” Psaki said.

In an interview with MSNBC ahead of Biden’s remarks on Thursday, Psaki said Biden really wants to lay out the path ahead.

“He’s going to speak directly to vaccinated people and their frustration, and he wants them to hear how we’re going to build on what we’ve done to date to get the virus under control and to return to some version of normal in this country,” Psaki said.

Just over 53% of Americans are fully vaccinated, including almost two-thirds of the adult population, according to data from the Centers for Disease Control and Prevention.

As part of his six-pronged strategy to boost vaccination Biden is expected to sign two executive orders requiring all federal executive branch employees and contractors be vaccinated against COVID — with no option for weekly testing for the unvaccinated as previously promised — three people familiar with the plan told CBS News.

As The Defender reported July 30, Biden announced all civilian federal employees and contractors would be required to show proof of vaccination against COVID, or submit to regular COVID testing, wear masks and socially distance.

In response to the news Biden would be issuing more mandates and restrictions on the unvaccinated, Mary Holland, Children’s Health Defense president and general counsel, told The Defender:

“The press anticipating President Biden’s speech suggests an utter and complete disavowal of the informed consent ethic for which the United States led the way in the Nuremberg Code at the end of World War II: the consent of the human subject is absolutely essential.

“Note the word ‘absolutely’ there must be informed consent. Full stop. President Biden’s efforts to coerce federal workers and those who have elected to remain unvaccinated is clearly in violation of the Nuremberg Code, which has been incorporated into U.S. federal and state law. This is a sad day for ethics and the rule of law.”

Biden is scheduled to deliver remarks at 5 p.m. Eastern time.

United Airlines told staff on Wednesday those who are granted religious exemptions to COVID vaccines will be placed on temporary unpaid medical leave, CNBC reported.

In August, United became the first major U.S. airline to issue a vaccine mandate for its employees. Employees have until Sept. 27 to get fully vaccinated or will face termination.

“We have no greater responsibility to you and your colleagues than to ensure your safety when you’re at work, and the facts are crystal clear: Everyone is safer when everyone is vaccinated,” United CEO Scott Kirby and President Brett Hart said to employees in a memo obtained last month by The Hill.

Employees, such as such as pilots, flight attendants and gate agents, who directly interact with customers and are granted an exemption will be permitted to return to work “once the pandemic meaningfully recedes,” United reportedly said, though the airline did not specify a timeline or lay out criteria for what “meaningfully recedes” looks like.

Mechanics and dispatchers who are also given exemptions may return to work once United implements new testing procedures and other mitigation measures, according to CNBC.

Airlines’ approaches to encourage vaccination rates of their staff have varied. Delta Air Lines is imposing a $200 surcharge on unvaccinated employees’ company healthcare premiums, and Delta, American Airlines and Alaska Airlines will end pay protections for unvaccinated employees who contract or are exposed to COVID.