Journalist Alex Berenson Tells The Defender: ‘They Are Censoring Dissenting Views and That Is Wrong’

In an interview with The Defender, Alex Berenson, former New York Times reporter and author of 12 books, explains why he was kicked off Twitter for 12 hours, and why social media shouldn’t suppress dissenting views on COVID vaccines. 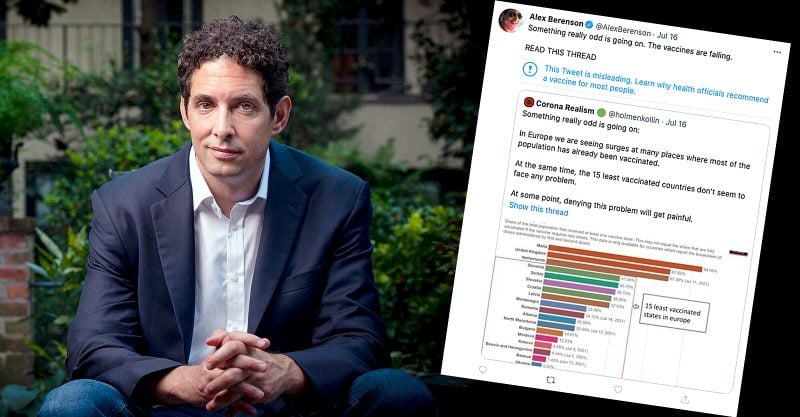 In an interview with The Defender, Berenson shared how he was banned from Twitter for 12 hours because he linked to a thread containing data that challenged the mainstream’s narrative that COVID vaccines are effective.

The former New York Times reporter and author of 12 novels and two nonfiction books — and currently author of the Substack publication “Unreported Truths” — said Twitter suddenly flagged several of his posts about COVID.

“My post said something really odd is going on –– the vaccines are failing, and they are. I linked to a long thread of data showing vaccine uptake is roughly inversely correlated with number of infections –– countries that have had the most uptake are now in the middle of the third wave. This person just pointed it out and I linked to it.”

Something really odd is going on. The vaccines are failing. 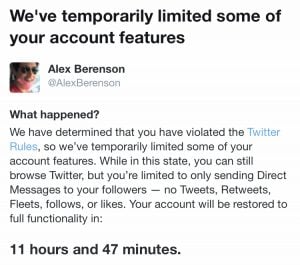 “I think I will be kicked off if I don’t back off — which I’m not going to do,” Berenson said.

When asked about the increase in censorship by social media platforms, Berenson explained:

WATCH + RT my interview with @AlexBerenson. We discuss censorship + the death of journalism, among other topics.https://t.co/ZULXJkXhjp

“In terms of actions…we have taken — or we’re working to take, I should say — from the federal government: We’ve increased disinformation research and tracking within the Surgeon General’s office. We’re flagging problematic posts for Facebook that spread disinformation. We’re working with doctors and medical professionals … who are popular with their audiences with accurate information and boost trusted content.”

Berenson said this in response to Psaki’s comments:

“They are censoring dissenting views and that is wrong. Suppose the next administration, instead of stopping The New York Times from selling papers, tells Exxon not to sell any diesel to The Times so they can’t print it and deliver it. ‘We’re not censoring. We’re just asking one private company to step in against another private company.’ That’s essentially what they’re doing.”

Berenson pointed out that Psaki was guilty of spreading misinformation in her July 16 White House press briefing when she said COVID vaccines had been approved by the U.S. Food and Drug Administration (FDA) and had gone through the gold standard of the FDA approval process. Yet, she wasn’t censored.

“The risk and impact there is that this type of information magnifies …  the risk of potential side effects associated with western vaccines. This is what … some of this misinformation is doing — and misleads the public by falsely alleging that mRNA vaccines are untested and, thus, risky, even though many of them are approved and have gone through the gold standard of the FDA approval process.

“But, certainly, pushing information out there that these tested, approved vaccines are ineffective and unhelpful — a lot of people on these platforms, they’re not discriminating, as you all know, between the source of the information. And that is damaging as well.”

“If the vaccines were nearly 100% effective, people would be lined up for them in the street. They wouldn’t be having a problem convincing 30 to 40% of the country to get the vaccine. The reason they’re having a problem is because side effects are real and a lot of people are having them after the shot, COVID isn’t that dangerous and there are questions about their effectiveness.

“It’s not because of me. I am one person with a Twitter account. We are up against an entire establishment here. If the message was more honest and what they were saying were actually true, there would not be a problem getting people vaccinated.”

I think I speak for all of us when I say:

WHO DO THESE PEOPLE THINK THEY ARE?

Even if the vaccines worked PERFECTLY – and even if Covid was the danger they pretended – government attempts to censor dissenting speech cut again the heart of what America is.

Berenson, whose children have received their childhood vaccines, backed into the vaccination issue because of COVID and believes the solution to the speech issue is more speech.

“Obviously there are people who say terrible things on Twitter and everywhere else,” Berenson said. “But outside of constitutionally recognized hate speech, it shouldn’t be suppressed.”

Berenson said it’s upsetting to him that his former colleagues at The Times don’t seem to feel strongly about this — that it’s okay to deplatform people.

“They make a living writing stories powerful people don’t like and one day they’re going to wish they had [cared about this issue],” Berenson said.

When it comes to media reporting, Berenson said when he worked at The Times, reporting was to be objective and fair. Today, “the media is much more willing to attack,” he said.

“There is a new aggressive movement with opinionated news stories, and what’s dangerous is that places like The Times still believe and present themselves as neutral when they aren’t. Social media companies and Wikipedia supposedly have neutral fact checkers of information, and that’s not true.

“Whenever a fact checker says something is partially true or partially false, they’re stating an opinion. Then what happens is Facebook says that ‘our fact checkers say X or Y’ and really what they’re doing is using the screen of unbiased fact-checking to remove information they don’t like.”

“To say that I’m lying or RFK Jr. is lying is wrong. To say that we shouldn’t be allowed to express our opinion is doubly wrong.”

Berenson said he doesn’t know if reporters are intentionally engaging in reporting that isn’t fair or accurate.

“It’s hard to get in other peoples’ heads and it’s hard to know how smart they are and whether they understand the data and how much of it is people repeating stuff to each other,” he said.

Berenson wrote for The Times from 1999 to 2010. For the past 18 months he has posted frequently on Substack about COVID.