Why We Do What We Do

The Children’s Health Defense Team is devoted to the health of people and our planet. Our mission is to end the childhood health epidemics by working aggressively to eliminate harmful exposures, hold those responsible accountable, and establish safeguards so this never happens again.

We do what we do for many reasons. Some of us have children who have been injured. Some of us have seen an injustice and feel the need to step in where others fear to tread. Some of us are focused on the demand for scientific integrity, others on improving the health of this, and future, generations. Some of us are eager to help any way we can. But the one thing we all share is our passionate belief that we have public health policies and practices that are harming our children. For the future good health of our children and planet, we call for more research and transparency. Read our personal stories below and join our movement.

My son weighed in at close to 9 lbs. He was a happy baby who ate and slept well, smiled, cooed, walked and talked all by one year.  Shortly after his first birthday he experienced multiple infections, lost speech, eye contact, developed a very limited diet and suffered intermittent bouts of bloody diarrhea. He had multiple evaluations he was initially diagnosed with a global receptive and expressive speech delay, an auditory processing disorder and ultimately autism. Read More

My son Jackson was born with 9 and 10 Apgar scores. He met all milestones until 16 months old. He had 25 words, was putting two words together, and had the beginning of pretending skills. He was a bright-eyed toddler who could tell the difference between a Concorde and a regular airplane and delighted in watching them from our home near Dulles Airport in Northern Virginia.  Read More

People ask me often why I still remain in mercury and children’s health activism…after all, my son is largely recovered from a serious childhood illness and I could change my life’s path to one much less upsetting. But in the 14 years I’ve been in this movement, I’ve met the smartest, most amazing people, all working on the common goal of making sure our future is secure, a planet where human brains are intact and people are able to live their lives to the fullest. How could I leave this passion, this fight? I can’t.  I believe this is the fight of our lifetime. The Biggest Medical Mistake in Human History is occurring and it MUST STOP. Read More 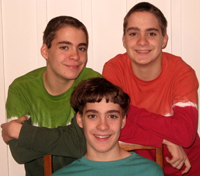 “Far and away the best prize that life has to offer is the chance to work hard at work worth doing.” Theodore Roosevelt

I do what I do every day because I believe passionately that we have public health policies and practices that are harming our children. I cannot stand idly by and let that happen. Read More

My son and my daughter were born in 1992 and 1993 respectively and both were in excellent health, meeting all developmental milestones on time or ahead of schedule for the first year and a half of life. Both were bright and happy babies who charmed everyone around them with their smiling faces and sunny dispositions. Around the age of 18 months, my son began to undergo drastic personality changes. He would scream and cry for no apparent reason and rarely slept at night or any other time. Read More

I come to Children’s Health Defense for two reasons.

Number one: I do not have a vaccine-injured child. I used to say that with complete confidence, but every time new research comes out I question that statement. Both my boys and I have ADD and major depressive disorders (my youngest died by suicide in 2009), and my oldest has a form of OCD called Excoriation. All of which can be connected to vaccines. There’s a reason I make this connection, rather than just saying “it runs in the family” or something similar. Here’s the history. Read more