In an op-ed published June 22, two physicians said the “large clustering” of side effects following COVID vaccines is “concerning,” and the “silence around these potential signals of harm reflects the politics surrounding COVID-19 vaccines.” 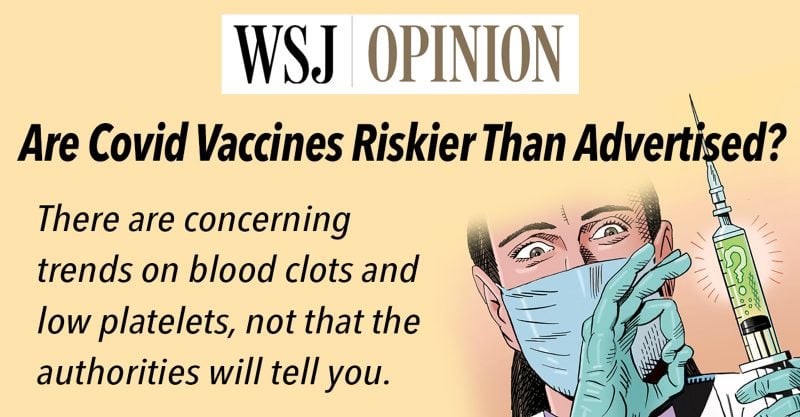 Kudos to the editors of the Wall Street Journal, which on Tuesday published an op-ed by two physicians who said politics — not science — is behind the failure of health officials and the media to fully inform the public about the potential risks associated with COVID vaccines.

In “Are Covid Vaccines Riskier Than Advertised?,” Joseph A. Ladapo, M.D., Ph.D., associate professor of medicine at the David Geffen School of Medicine, and Harvey A. Risch, M.D., Ph.D., professor of epidemiology at Yale School of Public Health wrote while “some scientists have raised concerns that the safety risks of Covid-19 vaccines have been underestimated … the politics of vaccination has relegated their concerns to the outskirts of scientific thinking.”

Ladapo and Risch highlighted the fact that clinical studies don’t always tell the full story about the safety of medications, and that the health effects often remain unknown until the medicine is rolled out to the general public.

“Historically, the safety of medications — including vaccines — is often not fully understood until they are deployed in large populations. Examples include rofecoxib (Vioxx), a pain reliever that increased the risk of heart attack and stroke; antidepressants that appeared to increase suicide attempts among young adults; and an influenza vaccine used in the 2009-10 swine flu epidemic that was suspected of causing febrile convulsions and narcolepsy in children. Evidence from the real world is valuable, as clinical trials often enroll patients who aren’t representative of the general population. We learn more about drug safety from real-world evidence and can adjust clinical recommendations to balance risk and benefits.”

The authors said the “large clustering” of side effects following COVID vaccines is “concerning,” and the “silence around these potential signals of harm reflects the politics surrounding COVID-19 vaccines.”

They wrote: “Stigmatizing such concerns is bad for scientific integrity and could harm patients.”

The serious adverse events reported by the Vaccine Adverse Event Reporting System, including low platelets, heart inflammation, deep-vein thrombosis and death, is likely “only a fraction” of the total number of adverse events, they said.

“The true number of cases is almost certainly higher,” said Ladapo and Risch. “This tendency of underreporting is consistent with our clinical experience.”

The authors slammed the Centers for Disease Control and Prevention (CDC) and the U.S. Food and Drug Administration (FDA) for ignoring the reported serious COVID vaccine side effects, and said more research is needed to understand the risks.

“Analyses to confirm or dismiss these findings should be performed using large data sets of health-insurance companies and healthcare organizations.The CDC and FDA are surely aware of these data patterns, yet neither agency has acknowledged the trend.”

The authors acknowledged the risks of COVID vaccines in certain populations may outweigh the benefits. They also noted that no studies show people who have recovered from the virus benefit from getting vaccinated.

“The implication is that the risks of a COVID-19 vaccine may outweigh the benefits for certain low-risk populations, such as children, young adults and people who have recovered from COVID-19. This is especially true in regions with low levels of community spread, since the likelihood of illness depends on exposure risk.

“And while you would never know it from listening to public health officials, not a single published study has demonstrated that patients with a prior infection benefit from COVID-19 vaccination. That this isn’t readily acknowledged by the CDC or Anthony Fauci is an indication of how deeply entangled pandemic politics is in science.”

Ladapo and Risch warned that prioritizing politics over science in the wake of a pandemic could result in widespread distrust in public health officials.

“Public health authorities are making a mistake and risking the public’s trust by not being forthcoming about the possibility of harm from certain vaccine side effects. There will be lasting consequences from mingling political partisanship and science during the management of a public-health crisis.”