Any emergency stay issued by the Supreme Court would not constitute a final ruling but would freeze enforcement of COVID vaccine mandates for businesses and healthcare workers until legal challenges make their way through the federal appeals courts. 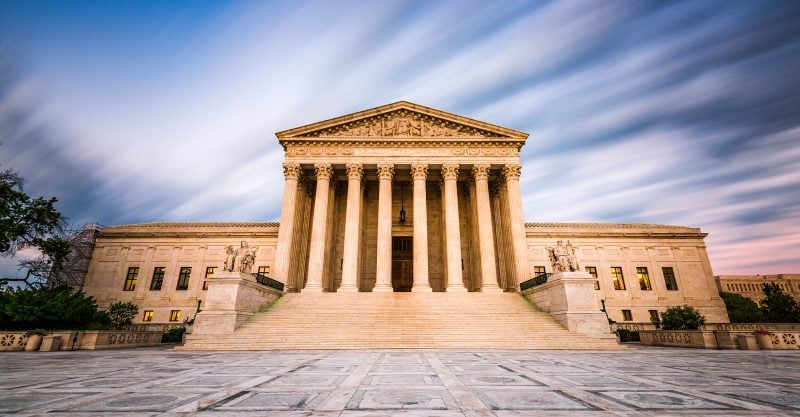 The U.S. Supreme Court on Jan. 7 will convene a special session to hear oral arguments in two cases related to the Biden administration’s COVID vaccine mandates.

The two cases pertain to the mandates imposed on private businesses with 100 or more employees, and healthcare facilities participating in the Medicare or Medicaid programs.

The Supreme Court announced Dec. 22, 2021, it would hold a special session to hear both cases, following a series of decisions in lower courts that successively implemented and lifted injunctions against the two mandates.

In both disputes, the formal legal question at hand pertains to whether the federal government can continue enforcing the mandates while legal challenges against them work their way through the judicial system.

The mandate is now set to come into force on Jan. 4, though the Occupational Safety and Health Administration (OSHA) announced it will not begin enforcement of the rule until Jan. 10. The mandate, if and when it is enforced, will impact an estimated 84 million U.S. workers.

Two of these requests, one filed by a trade group and the other by a group of states led by Ohio, were formally accepted for oral argument.

These groups were joined by more than 170 Republican lawmakers who on Dec. 30, 2021, jointly filed an amicus brief with the Supreme Court arguing OSHA has no legal authority to impose a vaccine mandate on private businesses.

The Supreme Court, via Justice Brett Kavanaugh — whose jurisdiction includes the 6th Circuit — asked the Biden administration to submit a response to the legal challenges by Dec. 30, 2021.

In its response, Solicitor General Elizabeth B. Prelogar argued the Biden administration possesses the authority, under federal law, to impose the mandate and the Supreme Court should not block a program that will save thousands of lives.

The Supreme Court will also hear arguments pertaining to Biden’s vaccine mandate for healthcare workers at facilities that receive federal Medicare or Medicaid funding. This rule is estimated to impact more than 17 million workers across the U.S.

In this instance, it was the Biden administration that filed an emergency request with the court, requesting it be allowed to temporarily enforce the healthcare worker mandate, which is currently blocked in 24 states following a series of injunctions issued by lower courts.

A brief filed with the Supreme Court by 14 Republican-led states described the mandate as “plainly unlawful.”

The Centers for Medicare & Medicaid Service, which oversees the healthcare mandate, announced Dec. 29, 2021, it will begin enforcing the mandate in the 26 states where it is not blocked.

A modified enforcement timeline accompanied this announcement: Healthcare workers will now be required to receive the first dose of a COVID vaccine by Jan. 27, and the second dose by Feb. 28.

The Supreme Court’s move to hold oral arguments in deciding whether or not to issue an emergency stay is considered unusual. Typically, such cases are placed on the “shadow docket” and are decided without a full briefing or a presentation of oral arguments.

In this instance though, the Supreme Court may seek to alleviate the uncertainty which exists among employers and workers who remain unsure as to whether they are subject to a mandate or not.

It remains unclear whether a decision by the Supreme Court to uphold the injunctions against the healthcare worker mandate will impact all 50 states or only the 24 where the mandate is currently blocked.

Any emergency stay issued by the Supreme Court would not constitute a final ruling regarding either case, but would freeze the enforcement of the two mandates until legal challenges make their way through the federal appeals courts before, most likely, ending up in the Supreme Court for a full hearing.

Separate Biden administration mandates pertaining to such categories as federal contractors and military personnel also have been challenged legally.

In the most recent such example, Judge James “Wesley” Hendrix of the U.S. District Court for the Northern District of Texas ruled against a mask and vaccine mandate for participants in federal Head Start programs. The rules were set to take effect by the end of January.

Texas Attorney General Ken Paxton described the ruling as “a win for the children of Texas.”

However, the Supreme Court will not examine any of these other Biden administration mandates in the Jan. 7 special session.

While the Supreme Court previously rejected requests for emergency stays against state-level vaccine mandates, the court is also viewed as one that is skeptical of the power of federal agencies to issue mandates relating to COVID countermeasures.

This stance was evident, for instance, when the court lifted a moratorium on evictions imposed by the Centers for Disease Control and Prevention, on the basis it was outside the agency’s authority.

Notably, a well-known Supreme Court decision from 1905, Jacobsen v. Massachusetts, which, according to proponents of vaccine mandates, sets a legal precedent for their legality, actually pertains to state-level mandates.

This argument was made by the state of Arizona in its lawsuit against the OSHA mandate, as previously reported by The Defender.

The lack of a federal-level precedent may therefore weigh into the justices’ decision.