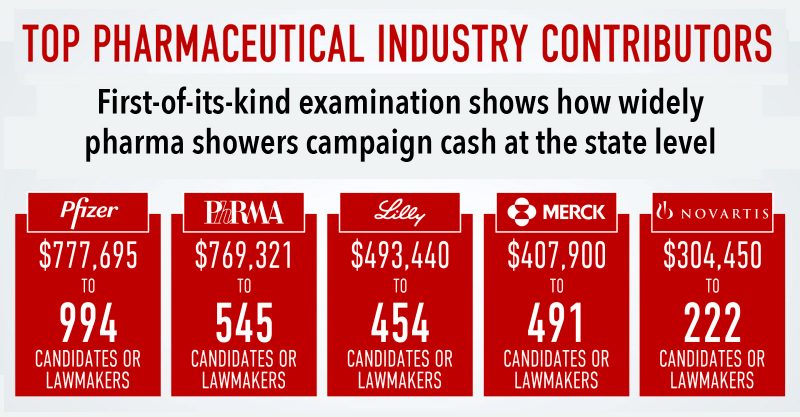 A new collaborative report by STAT and the National Institute on Money and Politics provides a first-of-its-kind analysis of the drug industry’s influence on state representatives.

The report also makes it easy for citizens to find out how much cash the industry spent in their state, and which lawmakers took it.

STAT tracked the political spending of 25 private entities, including the top 23 U.S. drugmakers and two industry lobbying groups: Pharmaceutical Research and Manufacturers of America (PhRMA) and the Biotechnology Innovation Organization.

The data, collected between January 2019 to July 2020, shows that even in the midst of a devastating pandemic, the pharmaceutical industry’s influence campaign reached almost 2,000 state lawmakers.

State elected officials cashed checks ranging from $500 to $20,000. Those amounts are small potatoes compared with what the industry hands out to federal lawmakers — but it’s enough to significantly influence a state legislator’s campaign, STAT said.

Eli Lilly, Merck and Novartis, which ranked third, fourth and fifth among contributors, each spent between $500,000 and $300,000 at the state level.

Of the 181 members of the Texas legislature, 66% reported receiving money from the pharmaceutical industry.

STAT designed an interactive map that makes it easy to check which elected officials in each state take drug industry cash, and from which company.

Citizens can draw their own conclusions about whether Big Pharma’s donations to a particular state senator influenced that lawmaker’s support for a specific industry-friendly state policy, or opposition to a policy opposed by industry.

For example, New Jersey State Senators Joe Vitale and Steven Sweeney supported S2173, a bill that would strip constituents of their rights to refuse vaccinations on the grounds of religious freedom. STAT’s interactive map shows Vitale and Sweeney took $4,100 and $9,500 in industry money respectively, from vaccine manufacturers Merck, GlaxoSmithKline, Eli Lilly and Pfizer.

STAT’s report follows its companion analysis of drug industry spending at the federal level, which revealed $11 million in industry giving as of July 2020.