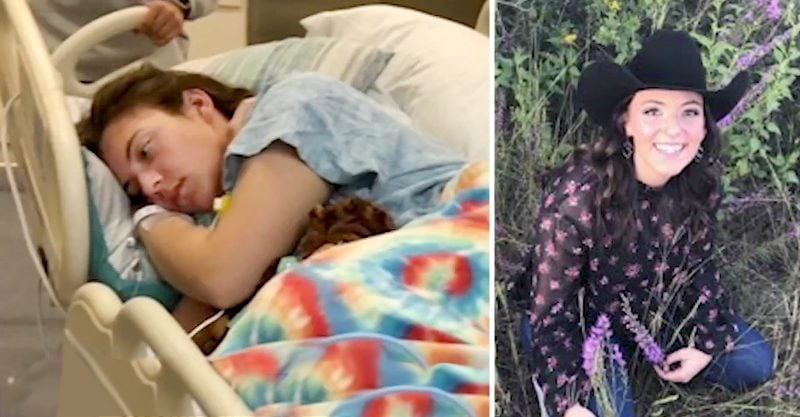 A 17-year-old hospitalized with Guillain-Barré syndrome (GBS) — a condition she developed after receiving a COVID vaccine — said she’s thankful she isn’t paralyzed and didn’t die.

Shelby Allen, who lives in Dyer County, Tennessee, said she started experiencing back pain and tingling in her arms a few weeks ago at a wedding. Her symptoms progressed until she found herself unable to feel her arms and legs while bowling with her school’s team.

“I’m on the bowling team in Dyer County, and I noticed when I was throwing the ball, I couldn’t feel my arm and legs,” Allen said. “So, I was freaking out.”

Her parents took her to a doctor in Jackson, Tennessee, where she was diagnosed with GBS. She was admitted to the ICU at Le Bonheur Children’s Hospital for treatment.

“When we got in, my doctor … told me right off the bat what she thought it was. She said ‘you have Guillain-Barré,’” Allen said.

Dr. Nick Hysmith, the medical director of infection prevention at Le Bonheur, said GBS is where “the body’s immune system gets a little bit confused and targets your nerve cells, and that leads to weakness.”

He said the adverse reaction is “extremely rare” and advised people to still get vaccinated.

According to the Mayo Clinic, initial symptoms of GBS include weakness and tingling in the extremities. The symptoms can spread quickly, eventually paralyzing the whole body.

People with GBS usually experience their most significant weakness within two weeks after symptoms begin. Most GBS patients require hospitalization.

According to data from the Vaccine Adverse Event Reporting System (VAERS), there have been 22 reported cases of GBS in children 12 to 18 years old after they got a COVID vaccine, with 21 of those cases attributed to Pfizer’s vaccine.

Allen, who was moved out of the ICU at Le Bonheur, said she is determined to walk at her graduation.

Allen said she feels blessed. “I could be dead, or I could be paralyzed.”

As The Defender reported Nov. 5, Diane Ochoa, a 63-year-old cancer survivor from Georgia, was diagnosed with GBS and chronic inflammatory demyelinating polyneuropathy after getting her second Pfizer shot.

In an exclusive interview, Ochoa said she is outraged after the vaccine injuries left her in “horrific pain,” unable to walk without assistance or provide for herself. Ochoa said she now suffers from injuries “far worse” than what she went through with her cancer treatment.

The Defender has also reported on a Texas teenager diagnosed with GBS a few weeks after his first dose of a COVID vaccine.

“I wanted to get the vaccine,” said Wyatt McGlaun, a high school senior. “I felt it was the right thing to do. I wanted to travel and enjoy my last summer before college.”

A few weeks after being vaccinated, McGlaun became weak and had difficulty walking. He was admitted to CHI St. Luke’s Health where he was diagnosed with GBS. Although McGlaun said he believed the vaccine was to blame, doctors said it could just be a “coincidence.”