After a Congressional report on Tuesday revealed the wealthiest Americans now own more than one-third of the country’s wealth, U.S. Sen. Bernie Sanders said the level of income and wealth inequality in the U.S. is “obscene.” 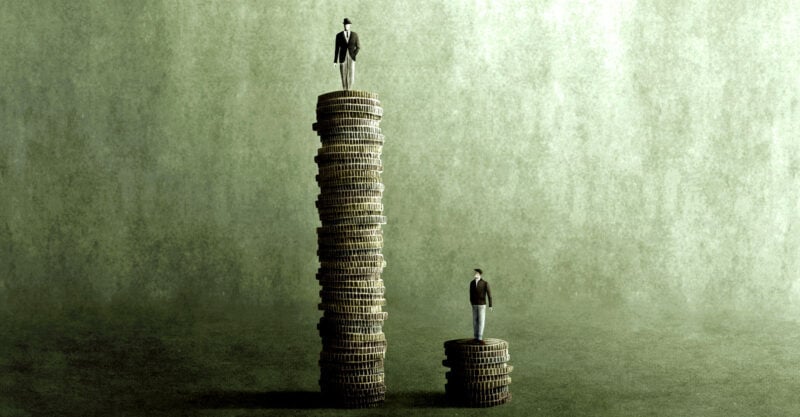 U.S. Sen. Bernie Sanders (I-Vt.) reacted Wednesday to new government figures showing the wealthiest 1% of Americans now owns over one-third of the country’s wealth by reasserting calls for systemic reforms to tackle the highest economic inequality of any major developed nation in the world.

The nonpartisan Congressional Budget Office on Tuesday published Trends in the Distribution of Family Wealth, 1989 to 2019, a report revealing that while the total real wealth of U.S. families tripled over those 30 years, the growth was dramatically unequal.

“Families in the top 10% and in the top 1% of the distribution, in particular, saw their share of total wealth rise over the period,” the report notes.

In a statement, Sanders said that “this report confirms what we already know: The very rich are getting much, much richer while the middle class is falling further and further behind, and being forced to take on outrageous levels of debt.”

“The obscene level of income and wealth inequality in America is a profoundly moral issue that we cannot continue to ignore or sweep under the rug,” the two-time Democratic presidential candidate argued.

Yet our mentions stay filled with people attacking those in that tiny bottom sliver as if they are what’s causing economic strife in the US.

It is in EVERYONE’S interest for this graph to look very different, very soon. This level of inequality is not sustainable.#RaiseTheWage https://t.co/EAz3V4Soxg

Additionally, the publication shows that by 2019, student loan debt was the largest component of total debt for families in the bottom 25% — more than their mortgage and credit card debt combined.

Among Americans age 35 or younger, 60% of their debt burden was due to student loans.

President Joe Biden last month announced a plan to cancel $10,000 to $20,000 in federal student loan debt per borrower, depending upon income, a move that drew both praise and admonition from progressives like Sanders — who advocates canceling all educational debt and making all college tuition-free.

“A society cannot sustain itself when so few have so much while so many have so little,” the democratic socialist asserted. “In the richest country on Earth, the time is long overdue for us to create a government and an economy that works for all of us, not just the 1%.”