Kristen Miller, acting director of Alaska Wilderness League, commended the moratorium but said until the leases are canceled, they will remain a threat to one of the wildest places left in America. 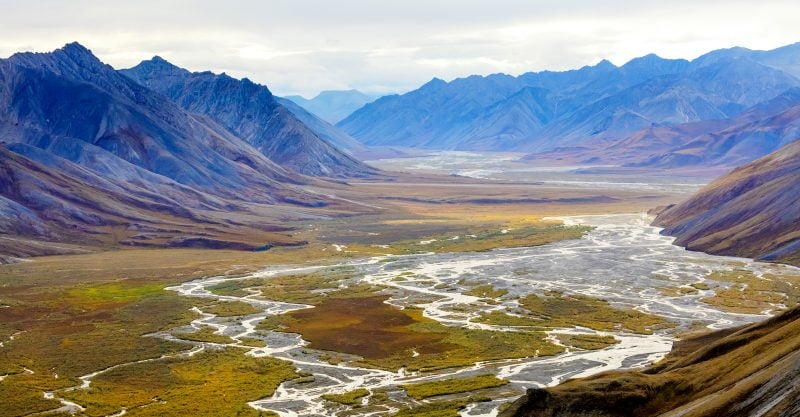 Environmental campaigners in Alaska and across the country are cautiously celebrating the Biden administration’s Tuesday decision to suspend some fossil fuel drilling leases that were sold in the Arctic shortly before former President Donald Trump left office while also calling on Congress to provide permanent protections to one of the planet’s most biodiverse places.

“We strongly support the Biden administration’s commitment to preserving the Arctic National Wildlife Refuge, one of the last great expanses of untouched wilderness areas in America,” said Kristen Miller, acting executive director of Alaska Wilderness League. “The leasing program and resulting lease sale were the result [of] a substantial flawed and legally deficient process that must be reversed.”

“Suspending these leases is a step in the right direction and we commend the Biden administration for committing to a new program analysis that prioritizes sound science and adequate tribal consultation,” Miller continued. “The Arctic refuge Coastal Plain is sacred to the Gwich’in people who were roundly ignored by the Trump administration, as well as the Iñupiat that have lived on the Coastal Plain for generations.”

“There is still more to be done,” she added. “Until the leases are canceled, they will remain a threat to one of the wildest places left in America. Now we look to the administration and Congress to prioritize legislatively repealing the oil leasing mandate and restore protections to the Arctic refuge Coastal Plain.”

“After fighting so hard to protect these lands and the Porcupine caribou herd, trusting the guidance of our ancestors and elders, and the allyship of people around the world, we can now look for further action by the administration and to Congress to repeal the leasing program,” she said. “There is so much more to do to protect these lands for future generations.”

This is a MASSIVE win for climate, wildlife & Indigenous communities! We thank Biden’s admin for standing with people — not polluters.https://t.co/vr8Cwjet2W

Citing “alleged legal deficiencies,” President Joe Biden issued an executive order on his first day in office directing the interior secretary to place a temporary moratorium on all activities related to the Coastal Plain Oil and Gas Leasing Program in the 19.6 million-acre Arctic National Wildlife Refuge (ANWR) and conduct a new, comprehensive analysis of its potential environmental impacts.

Gina McCarthy, the White House domestic climate policy adviser, said Tuesday that Biden “believes America’s national treasures are cultural and economic cornerstones of our country and he is grateful for the prompt action by the Department of the Interior to suspend all leasing pending a review of decisions made in the last administration’s final days that could have changed the character of this special place forever.”

Politico noted that “the move comes after the Biden administration disappointed environmental groups last week by lending its support to developing ConocoPhillips’ Willow project in the National Petroleum Reserve-Alaska, the area that lies to the west of ANWR.”

Michael Gerrard, director of the Sabin Center for Climate Change Law at the Columbia Law School, told the New York Times that the move could help appease critics of that decision.

“This will help solidify the president’s bona fides in opposing major new fossil fuel projects,” Gerrard said. “He doesn’t have a 100% clean record on this. This is certainly a step that the environmental community will smile on, coming at this moment, in view of the recent actions that environmentalists didn’t like.”

The Biden admin is suspending several oil and gas leases in the Arctic National Wildlife Refuge—an essential step to protect precious ecosystems and our climate. It’s also a move that’s popular among voters. @danielledeis and I break down the polling: https://t.co/g68LccMoHa

While environmental campaigners applauded the ANWR move, they also emphasized the importance of the administration going much further to protect ANWR’s 1.56 million-acre Coastal Plain.

“This is a welcome announcement and another strong step toward protecting the refuge,” said Environment America public lands campaign director Ellen Montgomery. “Thanks to President Biden’s action in January and today, the caribou and polar bears can live undisturbed by heavy equipment, roads and pollution from drilling operations. For now, we can breathe a little easier knowing that the seismic testing ‘thumper trucks’ are not going to be driving into the refuge.”

“While this buys some time, the fight to protect this unique and pristine area is not over,” she said. “We’re calling on Congress to establish permanent protections for this wild, remote area. Oil leases should never have been sold in the Arctic National Wildlife Refuge, and we now need our leaders to make sure it never happens again. We need more nature, more baby caribou, more denning polar bears and more wildlife. Here’s what we don’t need: dredging up fossil fuels in a wildlife refuge.”

Sen. Ed Markey (D-Mass.), a primary leader of climate legislation in Congress, also welcomed the suspension, saying that “today’s decision is an important step towards safeguarding the Arctic National Wildlife Refuge, protecting the people and species who depend upon this invaluable wild place and avoiding unnecessary climate and environmental harm.”

“The refuge needs more than this pause, it needs permanent protection. A new analysis will tell us what we already know, that the refuge is a special place and should never be opened up to drilling. I remain committed to passing my Arctic Refuge Protection Act and permanently protecting this unique and vulnerable habitat from oil and gas leasing and development,” added the senator, referencing a bill he reintroduced in February.

We must fight to preserve America’s wild places for future generations
https://t.co/rRKxeopM6U

Absent congressional action, the federal government will be legally required to hold two more lease sales by late 2024, thanks to what critics call the 2017 Trump tax scam.

The sale in early January followed decades of political fights over drilling in the region, but did not attract any interest from the fossil fuel industry’s major players.

“Despite the oil industry’s long efforts to access the refuge, the lease sale flopped, and generated only $14.4 million in revenue and bids from only three players, none of which were major oil and gas operators. Seven of the nine bids went to the Alaska Investment Development and Export Authority, a state-owned corporation that was urged to participate by former Alaska Govs. Bill Walker and Frank Murkowski, who raised concerns that industry would show no interest in the sale.

“In addition to AIDEA, Knik Arm Services, a real estate and leasing firm, and Regenerate Alaska, a subsidiary of the Australian oil and gas company 88 Energy, each picked up one tract.

“The leases were signed and issued on January 19.”

Greenpeace USA climate campaign director Janet Redman said Tuesday that “the disastrous idea to open up the Arctic National Wildlife Refuge to oil and gas corporations was never anything more than an eleventh-hour favor to fossil fuel billionaires from the previous administration.”

“It made zero sense then and as demand for oil continues to plummet and climate impacts wreak havoc across the world it makes even less sense now,” Redman added. “Scientists are clear that 100% of Arctic oil and gas must stay in the ground if we’re going to limit global warming to the 1.5 degrees Celsius outlined in the Paris agreement.”

“The bar for President Biden and his administration has never been whether they can reverse the climate destruction of the previous administration, but if they’ll do what science and justice demand to stop the climate crisis,” she said. “We fully expect President Biden to keep his promise to phase out fossil fuels and transition to 100% renewable energy. This includes ending oil and gas leasing on all federal lands and waters.”