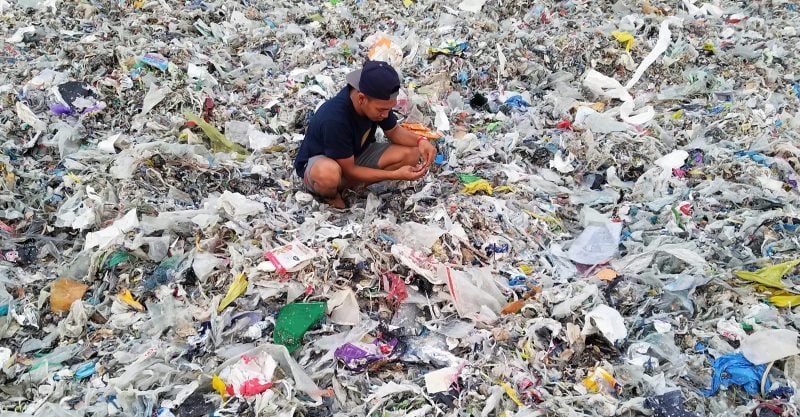 “There is a deadly ticking clock counting swiftly down.”

So says Tom Gammage, an ocean campaigner at the Environmental Investigation Agency (EIA), a UK-based group whose new report warns that only a muscular global treaty can turn the tide against the life-threatening crisis of plastic pollution.

Released in the wake of a landmark UN study that documented how plastic pollution in aquatic ecosystems has skyrocketed in recent years and is projected to more than double this decade and nearly triple by 2040 if governments fail to prevent fossil fuel and petrochemical companies from expanding the production of single-use plastics, EIA’s report seeks to inform discussions at next month’s UN Environment Assembly in Nairobi, Kenya, where member states will have a chance to commit to drastically reducing waste.

“If this tidal wave of pollution continues unchecked,” Gammage said Tuesday in a statement, “the anticipated 646 million tonnes of plastics in the seas by [2040] could exceed the collective weight of all fish in the ocean.”

“Around 92% of all plastic at the ocean surface is micro-plastic (fragments less than 5mm in size) that have either broken down from larger debris or were intentionally created that way. Our oceans truly are turning into a plastic soup. Up to 51 trillion plastic fragments exist in surface waters alone.

“It is now globally pervasive — plastic is found in the deepest parts of the ocean, on the highest mountain peaks, in human organs, and on remote and uninhabited islands. Some fragments are so microscopic (nano-plastics) that we are still developing the analytical techniques needed to even detect them.”

Gammage added that “the damage done by rampant overproduction of virgin plastics and their lifecycle is irreversible — this is a threat to human civilization and the planet’s basic ability to maintain a habitable environment.”

From the beginning of the manufacturing process to end-of-life — where just 9% of plastic waste is recycled, 12% is incinerated and 79% is thrown away — plastics generate physical and chemical pollution that degrades ecosystems.

Plastic waste is now recognized as a possible disease vector, and it plays an important role in spreading invasive species and antibiotic-resistant genes around the globe.

All of this adversely affects food webs, leads to the destruction of biodiversity and contributes to the disruption of Earth system processes that sustain life.

Moreover, the toxic substances used to create plastic products — consumed when humans ingest or inhale contaminated food, water or air — have been linked to cancer and other negative changes to hormonal, developmental and reproductive systems.

“The overriding evidence also suggests that these chemicals are connected to the recent sharp increase of non-communicable diseases in humans. This is recognized by calls for plastic waste to be classified as hazardous and in a consensus statement published by 33 scientists in 2020 which urged policymakers to reduce exposure to harmful chemicals present in food packaging.”

In addition, the fossil fuel-based production of plastics increases the emission of heat-trapping greenhouse gases, intensifying the climate emergency and jeopardizing the world’s ability to limit global temperature rise to 1.5°C.

“In 2015, the total estimated lifecycle emissions from plastics were 1.78 billion tonnes of carbon dioxide equivalent (GtCO2 e). For context, if the whole plastics lifecycle were a country, it would be the fifth-largest emitter of greenhouse gases in the world. By 2050, the lifecycle emissions of plastic are predicted to be 6.5 GtCO2 e per year, cumulatively taking up 15% of the entire remaining carbon budget.”

Another new study by researchers at the Stockholm Resilience Center found that chemical pollution on Earth has crossed a “planetary boundary,” with the worldwide boom in plastic production contributing significantly to the problem.

As EIA put it, “plastic pollution … poses a direct threat to the very limits of what our planet can manage.”

On top of “indirectly driving humanity closer to the planetary boundaries for climate change and biodiversity loss,” the report states, “it is clear that the rapid accumulation of plastic — not just in the ocean, but in all environments — poses a direct threat to planetary boundaries. If a disruptive effect to the Earth system is not already happening, then it soon will without decisive action.”

Despite being the world’s biggest per-capita plastic polluters, the U.S. and the UK have so far refused to join an international treaty to curb the amount of plastic waste destined for landfills and habitats, though both countries are reportedly now open to the idea.

Even though plastic production is a key contributor to the climate crisis, there was “no mention” of the issue in the final Glasgow Climate Pact made last year at COP26, EIA lamented. And although the UN Convention on Biological Diversity’s (CBD) proposed post-2020 framework “calls for the elimination of plastic waste discharges … it is unclear how this will be achieved.”

To “ensure multidimensional, long-term, and collaborative policy that considers plastic pollution as a planetary boundary threat and takes into account its knock-on impacts on other environmental crises,” EIA made the following recommendations:

Connecting the Dots states that “environmental crises typically compete for public and policy attention, with each crisis having its own band of proponents who insist their crisis is the one most in need of awareness, interest, and financial support.”

“The reality, however, could not be further from the truth — environmental crises such as biodiversity loss, climate change, and pollution do not exist in isolation,” the report stresses. “The root causes are, in fact, the same — the overconsumption of finite resources.”