Pfizer and BioNTech said their FDA request is based on results of a study, conducted by the two companies, which has not been published or peer-reviewed. 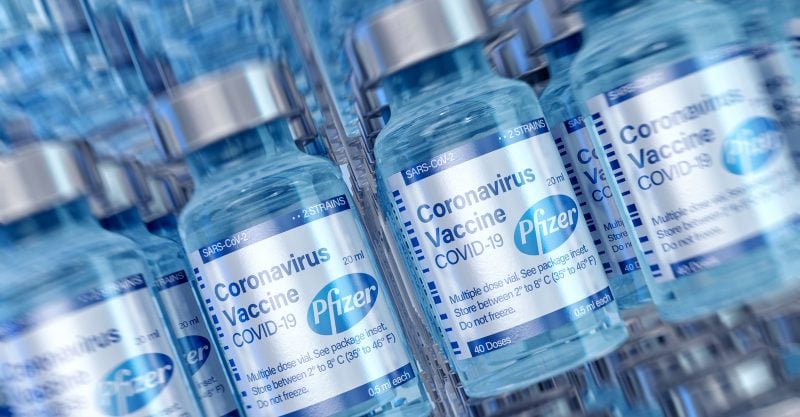 Pfizer and BioNTech on Tuesday asked the U.S. Food and Drug Administration (FDA) to authorize a third dose of their COVID vaccine for all people 18 and older, even though advisory panels to the FDA and Centers for Disease Control and Prevention (CDC) in September overwhelmingly rejected a similar request.

The companies said their new request is based on the results of a study, conducted by Pfizer and BioNTech, which has not been published or peer-reviewed.

The companies said the study of more than 10,000 volunteers showed vaccine efficacy against symptomatic infection of 95% or greater for people receiving the booster.

According to the Associated Press, a median of 11 months after receiving their last Pfizer vaccine dose, trial participants were given either a third booster dose or a placebo shot. Researchers tracked any infections that occurred at least a week later.

So far, five cases of symptomatic COVID occurred among booster recipients compared to 109 cases in the placebo group.

Pfizer did not disclose how many participants experienced asymptomatic infection, or whether the clinical trial included individuals with natural immunity acquired from previous SARS-CoV-2 infection — as did Pfizer’s clinical trial for 5 to 11 years olds.

According to CDC data, about 25 million people in the U.S. have received a COVID booster. It’s not clear how many would qualify for a booster if the FDA signs off on Pfizer-BioNTech’s request.

The “underlying medical” conditions that already make some eligible for a vaccine are rather broad, NPR reported. This category includes people with mental health disorders, smokers or former smokers and people who are overweight or obese.

Anecdotal evidence suggests many drugstores providing boosters doses are not making sure people fall into one of the authorized categories.

The FDA has not scheduled a meeting of its independent advisory committee, suggesting the agency may make a decision without seeking external advice.

Alison Hunt, an FDA spokeswoman, said the agency would review Pfizer’s application “as expeditiously as possible,” but would not set a timeline for a decision. If the FDA authorizes Pfizer’s request for expanded boosters, the CDC will make recommendations for how they should be used.

In September, the FDA’s Vaccines and Related Biological Products Advisory Committee (VRBAC) voted 16 to 2 against recommending a booster dose of Pfizer’s COVID vaccine for people 16 and older, citing a lack of long-term data showing the vaccine’s risks did not outweigh the benefits for the broader population.

VRBAC unanimously voted in favor of a third dose for people with compromised immune systems and/or people over age 65.

The FDA overruled the recommendations of its advisory panel and authorized Pfizer boosters for people over 65 and high-risk groups, although it did not authorize a third dose for healthy people in the broader population.

Like the FDA’s vaccine advisors, the CDC’s advisory panel recommended booster doses only for people 65 and older, long-term care facility residents and people 50 and older with underlying medical conditions that put them at higher risk of severe disease.

The advisers voted against recommending a booster dose for people whose jobs or situations put them at high risk of vaccine breakthrough infection — rejecting part of the FDA’s Emergency Use Authorization.

“We may just as well say give it to everyone 18 and older,” said Dr. Pablo Sanchez, a professor of pediatrics at Ohio State University.

​​Dr. Paul Offit, director of the Vaccine Education Center and professor of pediatrics in the Division of Infectious Diseases at Children’s Hospital of Philadelphia, said he believed the CDC advisers were worried recommending boosters based on employment would allow overly broad use, especially in younger people for whom the health benefits of a booster shot are still unclear.

“That was a hole that you could drive a truck through, that essentially what we were doing was basically what the (Biden) administration initially asked — to just have a vaccine for the general population, because obviously, the pharmacists aren’t going to figure out whether you’re working in a grocery store or hospital,” Offit said.

Since then, eligibility has expanded to include the majority of adults, including people who received other types of vaccines.

In a third-quarter earnings report released Nov. 2 by Pfizer, the company boosted its 2021 COVID vaccine sales from $33.5 billion to $36 billion.

Pfizer said its profit margin on the vaccine, before taxes and after splitting profit with BioNTech, is the “high 20s,” which means vaccine profits could approach $10 billion just for Pfizer this year. The sales estimate for 2021 is equivalent to roughly 80% of what Pfizer believes the rest of its business will earn in 2021.

In its earnings report, Pfizer forecasted $29 billion in sales in 2022, based on 1.7 billion doses committed to purchasing contracts. Pfizer said it will manufacture up to 4 billion doses next year, leaving 2.3 billion doses it could still sell.

“This is strictly about profits and not about public health,” said Robert F. Kennedy, Jr., chairman of Children’s Health Defense.

In April, Bourla said a third dose of Pfizer’s vaccine was “likely” to be needed within a year of the initial two-dose inoculation — followed by annual vaccinations.

Bourla said “a likely scenario” is “a third dose somewhere between six and 12 months, and from there it would be an annual re-vaccination.”