In a call with analysts Tuesday, the same day the Centers for Disease Control Prevention signed off on Emergency Use Authorization of Pfizer’s COVID vaccine for 5- to 11-year-olds, Pfizer boosted its 2021 sales forecast from $33.5 billion to $36 billion. 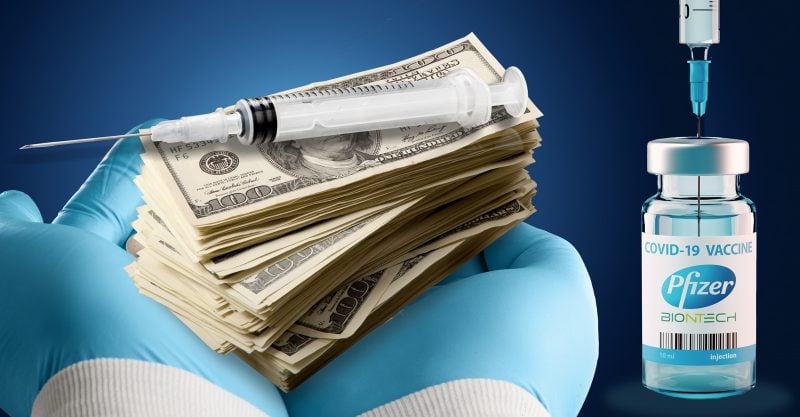 Pfizer Tuesday announced it expects to earn $36 billion in revenue this year from its COVID vaccine — an increase from the previous estimate of $33.5 billion.

Pfizer’s COVID vaccine, developed with BioNTech, has quickly become the highest-selling drug in the world. During an earnings call, Pfizer CEO Albert Bourla said the vaccine contributed $13 billion in revenue during the third quarter alone, bringing total revenue this year to $24.3 billion.

Pfizer said its profit margin on the vaccine, before taxes and after splitting profit with BioNTech, is the “high 20s,” which means vaccine profits could approach $10 billion just for Pfizer this year.

The sales estimate for 2021 is equivalent to roughly 80% of what Pfizer believes the rest of its business will earn in 2021.

The company forecasted $29 billion in sales in 2022, based on 1.7 billion doses committed to purchasing contracts. Pfizer said it will manufacture up to 4 billion doses next year, meaning there are 2.3 billion doses it could still sell, Axios reported.

Pfizer shares rose by more than 4% in early Tuesday trading on news of the earnings numbers.

In the U.S. and Europe, Pfizer has benefited from having the first vaccine cleared for booster doses and for use in younger adolescents and children. According to the company, its average market share as of Oct. 31 was 74% in the U.S. and 80% in Europe, up from 56% and 70%, respectively, in April.

Other rivals such as Moderna and Johnson & Johnson have faced production snags, helping Pfizer extend its lead in signing supply deals with countries.

Pfizer’s advantage could increase as the U.S. Food and Drug Administration (FDA) recently authorized the vaccine for use in children between 5 and 11 years old.

The earnings call occurred the same day advisers to the Centers for Disease Control and Prevention (CDC) met to discuss giving the Pfizer-BioNTech COVID vaccine to children ages 5 to 11.

The CDC’s vaccine advisory panel unanimously recommended Pfizer’s COVID vaccine on Tuesday for children 5 to 11, despite concerns raised during the meeting about Pfizer’s clinical data, the fact that children who previously acquired natural immunity to COVID were included in clinical trials and evidence showing COVID poses little risk to children.

CDC Director Dr. Rochelle Walensky signed off on the decision late Tuesday and children ages 5 through 11 could start receiving COVID vaccines as early as today.

As The Defender reported Nov. 2, analysts in the advertising industry believe a bolstered marketing push will follow now that the FDA has granted full approval to a Pfizer COVID vaccine under the name Comirnaty.

Pfizer’s goal may be long-term in scope: If annual or semi-annual COVID boosters become a reality, Pfizer may be gearing up to place its name ahead of the competition.

According to Pfizer’s most recent quarterly report, for the second quarter of 2021, there was a 10% increase in “SI&A expenses,” which include marketing and advertising, for the first half of 2021, as compared to the same period in 2020, when there was no COVID vaccine available.

By “sponsoring” television newscasts and information programs, Pfizer may be intending to do more than merely increase vaccination rates: They may wish to influence news coverage by these media, skewing such coverage in their favor in any number of ways.

Recent examples where Pfizer has sponsored prominent television news and information programs on American television include the following:

“Good Μorning America is brought to you by Pfizer.”

“ABC News Nightline, brought to you by Pfizer.”

“CNN Tonight, brought to you by Pfizer.”

Well, this is totally normal and not at all a conflict of interest pic.twitter.com/4MKm0VozBC

As recently highlighted by the Wall Street Journal, Pfizer — and other pharmaceutical companies — have not restricted their sponsorship campaign to news show segments and paid tweets.

In a recent segment on his online talk show, commentator and comedian Jimmy Dore ran off a list of recent headlines published by CNBC.com, presenting Pfizer in a positive light.

Moreover, by not advertising their vaccines by name, Pfizer-BioNTech and other drugmakers are not obliged, under current regulations, to rattle off a list of potential side effects associated with the vaccine, which would certainly do those companies no favors in the face of widespread vaccine hesitancy and criticism.