A report released Thursday by Patients for Affordable Drugs found pharma companies this month alone raised the prices of 554 drugs, and Pfizer led the pack upping the price of more than 120 of its drugs. 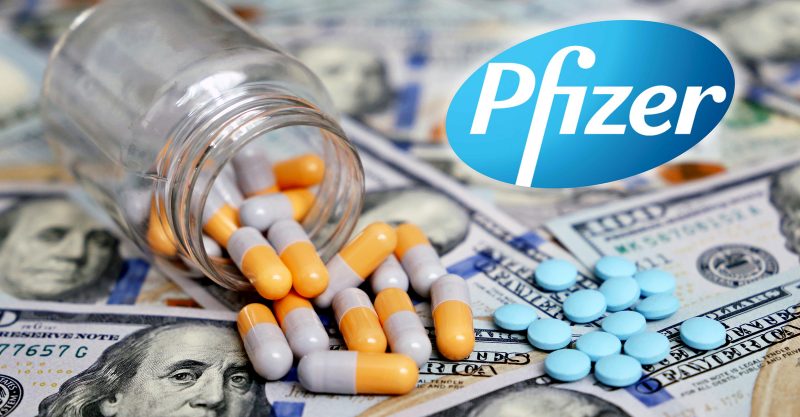 After raking in enormous profits from its coronavirus vaccine in 2021, the U.S.-based pharmaceutical giant Pfizer has kicked off the new year by hiking the prices of more than 120 of its drugs, resulting in significantly higher costs for patients amid a deadly pandemic.

That’s according to a new report released Thursday by Patients for Affordable Drugs (P4AD), which found that pharmaceutical companies have raised the prices of 554 medicines this month alone.

Pfizer led the way with 125 price hikes to start 2022, leading P4AD to label the company the industry’s “poster child for greed.”

“Due to sales of its Covid-19 vaccine, which is set to be the best-selling drug of all time, Pfizer shattered profit records in 2021. Projected sales for 2022 are $54.5 billion—more than double the previous record for one-year sales for a prescription drug,” the report notes.

“To put this into perspective, AbbVie’s Humira previously held the spot with $19.8 billion in sales, and Pfizer’s best-selling product just prior to the pandemic achieved worldwide revenues of $5.8 billion.”

“Despite this record revenue in 2021,” the report continues, “Pfizer began 2022 with price hikes on seven of its 10 best-selling drugs,” including its pneumonia vaccine (up 6.9%), a breast cancer medication (up 6.9%), and a treatment for people with cardiovascular disease (up 6%).

“These hikes of 5% or 6% can translate into thousands of dollars in higher costs for patients,” P4AD notes.

Ashley Suder, a West Virginia resident who takes Pfizer’s Eliquis to manage her autoimmune disease, told P4AD that she has had to spend her “entire paycheck” on medication and will likely be taking Eliquis for the rest of her life.

“With the price increasing again,” said Suder, “I worry about how I’ll make ends meet while still affording my drugs.” 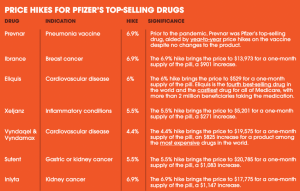 While the worst offenders, Pfizer and its subsidiaries were hardly alone in raising drug costs for patients during the first month of 2022, according to P4AD, which also spotlighted price hikes by Gilead, Eli Lilly, and other prominent pharmaceutical companies.

“So far in 2022,” the group noted in a press release, “drug companies have increased prices on 554 drugs, 183 drugs were hiked by $100 or more and 118 drugs with increases carry a price over $5,000. The average price hike was 6.3%, and one in four price hikes exceeded the most recently available inflation rate at the time of analysis.”

David Mitchell, P4AD’s founder and a blood cancer patient whose medications have a list price of more than $900,000 annually, said in a statement Thursday that “even as we enter the third year of a pandemic, Big Pharma continues its practice of targeting American patients and consumers with price increases, completely undeterred by the financial and health challenges facing American families.”

“Drug corporations can do this because we let them — unlike other nations that use their purchasing power to get a better deal,” Mitchell added.

The Build Back Better Act, Democrats’ $1.75 trillion reconciliation package, includes provisions that would let Medicare negotiate the prices of a limited subset of prescription drugs directly with pharmaceutical corporations, something it is currently barred from doing by law — a prohibition that has contributed to sky-high medicine costs in the U.S.

Democrats’ legislation would also penalize drug companies that hike prices faster than the rate of inflation, which is currently at a 40-year high.

But the House-passed bill remains stuck in the Senate as Sen. Joe Manchin (D-W.Va.) demands the removal of key Democratic priorities, including the expanded child tax credit and investments in affordable housing. Democrats are expected to continue working to advance the legislation in the coming days.

“The drug pricing legislation agreed to in the Build Back Better Act would curb rising drug prices for millions of patients and halt abusive annual price hikes by limiting increases to the rate of inflation, which is projected to return to 2.3% in 2023,” Mitchell said Thursday. “The Senate must pass this legislation immediately.”