Pfizer plans to request Emergency Use Authorization from the FDA based on data from its phase 2/3 trial for children ages 5 to 11, as experts question the company’s data and need for kids to be vaccinated against COVID. 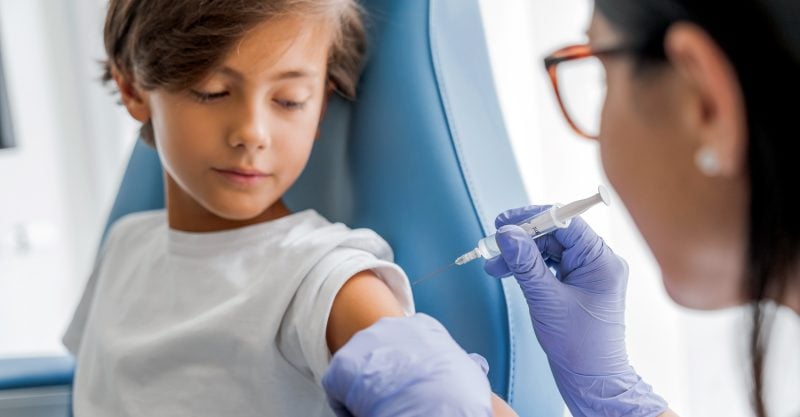 Pfizer said Monday a phase 2/3 trial showed its COVID vaccine was safe and generated a “robust” antibody response in children ages 5 to 11, but experts warn Pfizer’s data is misleading, and some question the need for kids to be vaccinated in the first place.

These are the first results released for this age group for a COVID vaccine, and the data has not yet been peer-reviewed or published, CNN reported.

Pfizer said it plans to request Emergency Use Authorization from the U.S. Food and Drug Administration (FDA) soon. FDA officials said once data is submitted, the agency could authorize a vaccine for younger children in a matter of weeks.

“We are eager to extend the protection afforded by the vaccine to this younger population, subject to regulatory authorization, especially as we track the spread of the Delta variant and the substantial threat it poses to children.”

The trial included 2,268 participants ages 5 to 11, and used a two-dose regimen of the vaccine administered 21 days apart. The trial used a 10-microgram dose — smaller than the 30-microgram dose used for those 12 and older.

Dr. Bill Gruber, a Pfizer senior vice president and pediatrician, told Associated Press (AP) that after a second dose, children 5  to 11 years old experienced similar or fewer temporary side effects — such as sore arms, fever or aches — than teens experience.

“I think we really hit the sweet spot,” Gruber said. “I feel a great sense of urgency. There’s pent-up demand for parents to be able to have their children returned to a normal life.”

Pfizer and BioNTech didn’t disclose many details about the trial, including whether any of the kids in the trial experienced myocarditis, a rare heart condition seen in a small number of adolescents and young adults, CNBC reported.

The companies said data for the other two age cohorts from the trial — children 2 to 5  years of age and children 6 months to 2 years — are expected as soon as the fourth quarter of this year.

In New Jersey, Dr. Nisha Gandhi enrolled her 10-year-old daughter, Maya Huber, in the Pfizer study at Rutgers University. Once she knows she is protected from COVID, Maya told AP, her first goal will be “a huge sleepover with all my friends.”

Maya said it was exciting to be part of the study even though she was “super scared” about getting jabbed. But “after you get it, at least you feel happy that you did it and relieved that it didn’t hurt,” she said.

As The Defender reported, Maddie de Garay, age 12, who also participated in one of Pfizer’s COVID vaccine trials for 12- to 15-year-olds, was paralyzed after her second dose.

De Garay’s severe adverse reaction to Pfizer’s vaccine was excluded from the clinical trial data presented to the public, according to Steve Kirsch, founder of the COVID-19 Early Treatment Fund, who challenged the FDA’s safety panel during the Sept. 17 hearing about de Garay’s case.

“Before Maddie got her final dose of the vaccine she was healthy, got straight A’s, had lots of friends and a life,” her mother said. “Now she is in a wheelchair.”

Dr. Elizabeth Mumper, pediatrician, president and CEO of The RIMLAND Center and member of Children’s Health Defense’s (CHD) Scientific Advisory Committee, in an email to The Defender said, Pfizer did not share specific data on efficacy or side effects, and CHD remains skeptical of “science by press release.”

“This clinical trial of 2,268 children is not large enough to detect relatively rare adverse outcomes, like myocarditis, nor is it long enough to detect long-term side effects. CHD remains concerned that the risk of taking this new technology injection is higher than the benefits for children in the 5-11 age group.”

Mumper said since children are usually asymptomatic or mildly symptomatic from COVID infections, Pfizer cannot make accurate conclusions about the impact on hospitalizations or severe illness in children 5 to 11 years old.

In addition, “the Pfizer study apparently relied on measurements of antibody responses, extrapolating from adult data to imply protection,” Mumper said. “COVID has taught us that T cell and natural killer cell responses are a crucial part of immune protection. CHD eagerly awaits the actual data so we can do a more detailed analysis.”

According to AP, the FDA required what is called an immune “bridging” study — evidence that the younger children developed antibody levels already proven to be protective in teens and adults — and that’s what Pfizer reported Monday in a press release, not a scientific publication.

Dr. Peter Marks, director of FDA’s Center for Biologics Evaluation and Research, said the pediatric studies should be large enough to rule out any higher risk to young children. Yet, Pfizer’s study isn’t large enough to detect any extremely rare side effects, such as the heart inflammation that sometimes occurs after the second dose, mostly in young men, Marks said.

Why are we vaccinating children against COVID?

Researchers pointed out clinical trials for COVID vaccines were very short (a few months), had samples not representative of the total population and for adolescents/children, and had poor predictive power because of their small size.

Further, clinical trials for COVID vaccines did not address changes in biomarkers that could serve as early warning indicators of elevated predisposition to serious diseases, the researchers said. “Most importantly, the clinical trials did not address long-term effects that, if serious, would be borne by children/adolescents for potentially decades,” the study concluded.

During this time, the Vaccine Adverse Event Reporting System (VAERS) — a passive surveillance system managed jointly by the Centers for Disease Control and Prevention (CDC) and FDA — received 4,863 reports of death among people who received a COVID vaccine. Historically, VAERS has been shown to report only 1% of actual vaccine adverse events.

According to the study, the best-case scenario cost-benefit analysis showed very conservatively that there are five times the number of deaths attributable to each vaccination compared to COVID in the most vulnerable 65 and older demographic.

The risk of death from COVID decreases drastically as age decreases, said the researchers, and the longer-term effects of the vaccine on lower age groups will increase their risk-benefit ratio, perhaps substantially.

Experts spoke out against vaccines for kids at prior FDA meeting

During an FDA meeting June 10 to discuss granting EUA for COVID vaccines for children under 12, several experts spoke out against the plan, saying the benefits don’t outweigh the risks for young children.

Peter Doshi, Ph.D., associate professor at University of Maryland School of Pharmacy and senior editor of The BMJ, said during the open public hearing session, there is no emergency that would warrant using EUA to authorize COVID vaccines for children.

Pointing to Pfizer’s clinical trial of 12- to 15-year-olds which supported the vaccine’s EUA for that age group, Doshi said the harms outweighed the benefits and those who had the placebo were “better off” than those who received the vaccine.

Doshi said few children in Pfizer’s trial benefited because they didn’t get COVID, already had COVID or were asymptomatic. Doshi pointed to data from the CDC showing 23% of 0- to 4-year-olds at the time, and 42% of 5- to17-year-olds already had COVID and acquired robust natural immunity.

As for long-term side effects, Doshi said many severe side effects occur beyond six weeks after dosing.

Doshi reminded the FDA it cannot authorize or approve a medical product in a population unless the benefits outweigh the risks in that same population.

“Before we start vaccinating millions of adolescents and children, it’s important to find out what the consequences are,” Meissner said, noting a low COVID hospitalization rate among children.

As The Defender reported, the authors of an op-ed published in July in The BMJ argued against vaccinating children, stating:

“ … the assertion that vaccinating children against SARS-CoV-2 will protect adults remains hypothetical. Even if we were to assume this protection does exist, the number of children that would need to be vaccinated to protect just one adult from a bout of severe COVID-19 — considering the low transmission rates, the high proportion of children already being post-COVID, and most adults being vaccinated or post-COVID — would be extraordinarily high.

“Moreover, this number would likely compare unfavorably to the number of children that would be harmed, including for rare serious events.”

In June, a group of more than 40 doctors, medics and scientists called the UK government’s plan to vaccinate children for COVID “irresponsible, unethical and unnecessary.”

In an open letter addressed to the Medicines and Healthcare Products Regulatory Agency, the group said no one under 18 should be vaccinated for COVID because evidence shows the virus poses almost no risk to healthy children.

Also in June, America’s Frontline Doctors, a non-partisan, not-for-profit organization, filed a request for a temporary restraining order, which was denied, against the emergency use of COVID vaccines in children under age 16.

“This is an experimental biological agent whose harms are well-documented (although suppressed and censored) and growing rapidly, and we will not support using America’s children as guinea pigs.”

Members of the FDA’s advisory panel, public health experts and scientists have expressed concerns about using COVID vaccines in the pediatric population.