Kids and COVID: How Big Is the Risk?

A JAMA study that assessed COVID and other leading causes of death among various age groups found that between March and October 2020, the COVID mortality rate among children ages 5-14 was about one per million. 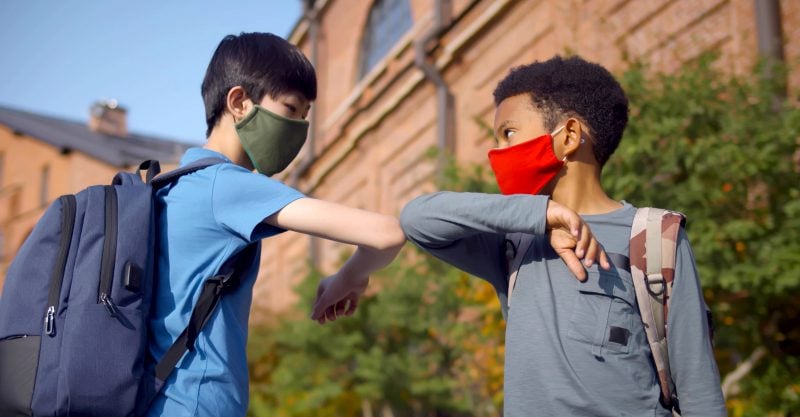 A year into the pandemic, most U.S. schools are still closed, leaving millions of kids with few options when it comes to interacting with their peers.

Social isolation, imposed to keep kids safe from COVID, has taken a huge toll on their mental health. Yet studies show that during this past year, children were far more at risk of dying of other causes — including suicide — than they were of dying of COVID.

According to the Centers for Disease Control and Prevention (CDC), 28,138,938 people have tested positive for COVID-19 since the onset of the pandemic.

The American Academy of Pediatrics showed that of those cases, only 3.17 million were children. Of the 3.17 million COVID cases among children, only 0.1% – 2.2% resulted in hospitalization, and children made up only 0.00% – 0.19% of all COVID deaths, according to data reported by health departments from 49 states, New York City, the District of Columbia, Puerto Rico and Guam.

A study in the Journal of American Medical Association that assessed COVID and other leading causes of death among various age groups found that between March and December 2020, the COVID mortality rate among children ages 5-14 was about one per million.

An analysis published in the CDC’s Morbidity and Mortality Weekly Report reaffirms that it’s very uncommon for children to die from COVID. As of July 31, 2020, less than 1% of people who died from COVID in the U.S. were children or adolescents.

“The data really speaks to the fact that COVID-19 generally has been a much milder disease in children than in adults,” said Dr. Camille Sabella, director of the Center for Pediatric Infectious Diseases at the Cleveland Clinic.

A study published in the European Journal of Pediatrics showed only a rare subset of children — mostly those with serious underlying medical conditions such as obesity, diabetes and asthma, congenital heart disease, genetic conditions or conditions affecting the nervous system or metabolism — experienced hospitalization or worse from COVID.

“Children of all ages can become ill with COVID-19. But most kids who are infected typically don’t become as sick as adults and some might not show any symptoms at all,” according to Mayo Clinic.

However, the data hasn’t prevented vaccine makers from looking ahead to children as the next market for their COVID vaccines. Pharmaceutical company Johnson & Johnson (J&J) announced last week plans to test its experimental COVID vaccine on infants, despite the fact that COVID is uncommon in newborns born to mothers who had the illness during pregnancy, and most newborns who did test positive had mild or no symptoms and fully recovered, according to the CDC.

To date, none of the COVID vaccines have been proven to prevent transmission of the disease. In a press release announcing Emergency Use Authorization of J&J’s vaccine, the U.S. Food and Drug Administration stated there was no “evidence that the vaccine prevents transmission of SARS-CoV-2 from person to person.”

In addition, vaccine efficacy is based on the vaccines’s ability to prevent moderate-to-severe COVID symptoms, which the vast majority of children do not experience.

A recent systematic review estimated that 16% of children with COVID are asymptomatic, but evidence suggests that as many as half of pediatric infections may be asymptomatic, according to the CDC.

In October 2020, a controversial document known as the Great Barrington Declaration argued that pandemic policies should focus on protecting the most vulnerable while the rest of the population builds up immunity through natural infection.

The premise of the declaration was that though anyone can get infected with COVID, there is more than a three-fold difference in mortality between the oldest and the youngest. Children, for example, have a lower mortality from COVID than annual influenza, and people under 70 have a survival rate of 99.95% in general, according to the “Focused Protection” statement.

The declaration also argued that the harms of lockdowns, including school closures and social isolation are far greater than the risk of harm COVID poses to young people.

The authors of the declaration — infectious disease epidemiologists and public health experts — held that those who were not vulnerable should be allowed to resume life as normal, utilizing proper hygiene and quarantine during sickness to reduce the herd immunity threshold. It called for schools to open, sports to resume and culture activities to go on while “society as a whole enjoys the protection conferred upon the vulnerable by those who have built up herd immunity.”

Jonas Ludvigsson, pediatrician and professor of epidemiology, is one of the original 47 signers. He conducted a peer-reviewed study which showed that relatively few children in Sweden became ill from COVID-19 during the first wave of the pandemic. Data from Sweden is important because the country kept schools open when the rest of the world closed them, children did not wear masks and social distancing was only encouraged.

Among the 1.95 million children ages 1-16, 15 had COVID or multi-inflammatory syndrome linked to COVID and were admitted to an intensive care unit. This is equal to 1 child in 130,000 or 0.77 intensive care patients per 100,000 children in that age group, said Ludvigsson. Of children admitted to the ICU, four had underlying diseases and no children died.

Ludvigsson faced backlash over the findings and quit his research on COVID, despite the fact that his study underwent formal external peer review, statistical peer review and four revisions prior to being published in a research letter in the New England Journal of Medicine.

“It is deeply concerning when academics are threatened to the extent that they don’t have the courage to keep on doing their job. This is not a new phenomenon, but we have seen an increase of threats against academics related to research on the coronavirus. When people are silenced, it’s a threat against the freedom of speech and our democracy.”

Science and society are failing children in the COVID era, reported Scientific American. The science magazine concluded that CDC guidance is abundantly clear, evidence to date points to COVID posing a low risk to children, with the risk of spread also low if well-managed, even in the school setting.