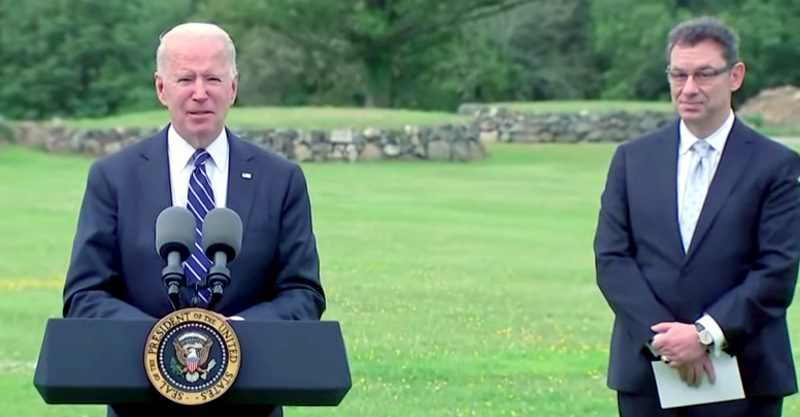 Politico obtained a copy of a 3-minute video message in which Bourla echoes common — and misleading — pharmaceutical industry talking points against the Medicare negotiation plan, which top Democrats are working to include in a budget reconciliation package despite the objections of several Big Pharma-backed lawmakers.

“When we asked the Pfizer colleagues to develop a COVID-19 vaccine in less than a year, you did,” Bourla says in the video. “When we asked you to rapidly expand manufacturing so we can produce 3, 4 billion doses per year, you did it. Now, we are asking you to do something equally important to educate yourself regarding policies that will help our breakthroughs get into the hands of those who need them, while protecting our sector’s ability to develop those breakthroughs in the first place.”

According to Politico, the emailed video message “included a link labeled ‘CLICK HERE To email your Member of Congress today.’ A disclaimer at the bottom read: ‘Participation in any Pfizer Grassroots mobilization is completely voluntary and is not a requirement of your employment at Pfizer.'”

Politico’s reporting Wednesday came shortly after Biden, during a speech at a White House-hosted coronavirus summit, praised Bourla and Pfizer for being “partners and a leader” in the fight against the global coronavirus pandemic.

“I want to thank Pfizer and its CEO and chairman, Albert,” the president said. “Albert has been a good friend and has been helpful.”

Pfizer and its vaccine partner BioNTech have sold most of their vaccine supply to the U.S. and other wealthy nations as billions of people in low-income countries remain without access to a single dose.

An analysis released last week by the People’s Vaccine Alliance estimated that Pfizer/BioNTech and Moderna have “sold more than 90% of their vaccines to rich countries, charging up to 24 times the potential cost of production.”

“The COVID vaccine now accounts for more than a third of Pfizer’s overall revenue base,” the analysis found. “Pfizer has sold more than $11 billion in vaccines in the first half of this year. Pfizer is now projecting $33.5 billion in total vaccine sales for 2021, making the vaccine one of the top selling pharma products this year and potentially in the history of the pharmaceutical industry.”

Biden in the AM: Albert Bourla is my good friend.

Bourla in the PM: Biden’s drug plan is the worst and I hate it.https://t.co/XQJaAMnmjf

In recent weeks, major pharmaceutical industry players have mobilized aggressively against Democrats’ drug pricing reforms, pouring millions of dollars into ads against proposals that are favored by an overwhelming majority of U.S. voters.

Big Pharma’s lobbying blitz appears to be paying off. A Washington Post tally indicates that at least nine Democrats in the House and Senate could be willing to vote against their own party’s drug-price reforms, which — if enacted — would endanger pharmaceutical companies’ unchecked ability to set sky-high prices for lifesaving prescription medicines. A recent study by Gallup and West Health found that 18 million U.S. adults were unable to afford a prescribed medication this year.

Last week, a trio of Democrats — Reps. Scott Peters of California, Kurt Schrader of Oregon and Kathleen Rice of New York — blocked the Medicare proposal from passing out of the House Energy and Commerce Committee, drawing the ire of patient advocacy groups and progressive lawmakers. Pfizer employees and PACs are the top contributors to Peters’ campaign committee this election cycle, according to OpenSecrets.

Carrying water for Pharma is not only a moral failure, it is also a political failure — and any politician who puts Pharma profits before the needs of constituents will lose their jobs.

“Right now, they are spending many millions of dollars on campaign contributions, on TV ads, and on lobbying in order to defeat the $3.5 trillion reconciliation bill that will finally lower the price of prescription drugs by giving Medicare the ability to negotiate with the pharmaceutical industry,” Sanders continued. “Well, today, we tell Big Pharma clearly: Your days of calling the shots in Washington, D.C. are over.”