With a key fight underway in Congress, industry is trying to leverage its role in coronavirus vaccine development to sink a "once-in-a-generation" chance to slash drug costs. 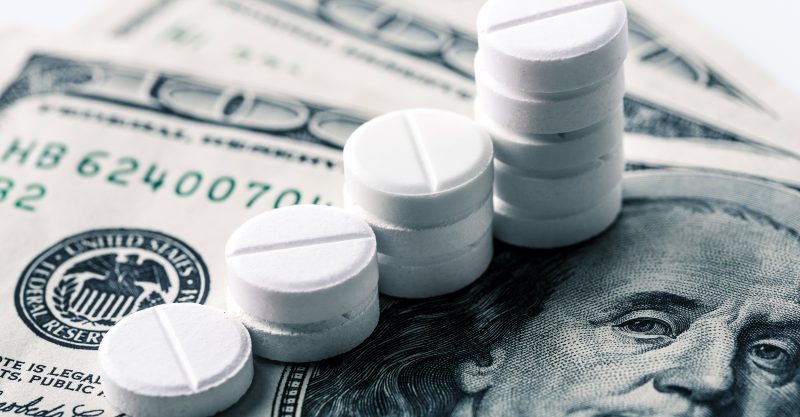 Determined to shield its surging pandemic profits, the U.S. pharmaceutical industry is ramping up its campaign to stop congressional Democrats from enacting reforms to curb sky-high drug prices — a broadly popular legislative effort that one Big Pharma spokesperson dismissed as “too good to be true.”

Politico reported Sept. 2 that in recent private discussions with lawmakers, pharmaceutical lobbyists have explicitly invoked the industry’s role in the rapid development of coronavirus vaccines as an argument against proposed fixes for out-of-control prescription drug costs and other regulations. Any government attempt to intervene in pharmaceutical companies’ price-setting, industry lobbyists claim, would stifle innovation and prolong the fight against COVID-19.

“For years, politicians have been saying that the federal government can interfere in the price of medicines and patients won’t suffer any harm,” said Brian Newell, a spokesperson for the Pharmaceutical Research and Manufacturers of America (PhRMA), a trade group that represents some of the largest drug companies in the nation, including Pfizer, AstraZeneca, and Eli Lilly.

“In countries where this already happens, people experience fewer choices and less access to prescription medicines,” Newell declared. “Patients know if something sounds too good to be true, then it usually is.”

Progressive advocates for lower drug prices adamantly reject that argument, characterizing it as a disingenuous narrative concocted by pharmaceutical companies looking to protect their bottom lines and uphold a status quo that has left the U.S. with by far the highest drug prices of any rich country.

David Mitchell, founder of Patients for Affordable Drugs, told Politico that “this is the best chance that we have seen in a couple of decades to enact meaningful reforms to drug pricing policy in the United States that will lower the prices of prescription drugs, and it’s very clear that the drug companies are going all out to stop it.

As part of their emerging budget reconciliation package, Democrats are pushing to allow Medicare to negotiate prescription drug prices directly with pharmaceutical companies — a proposal that President Joe Biden has endorsed.

Sen. Bernie Sanders (I-Vt.), chair of the Senate Budget Committee and a leading advocate of the reform, estimates it would save the federal government around $450 billion over the next decade, funds that could be used to expand Medicare’s benefits. Recent research has also found that the policy change could save individual patients thousands of dollars on crucial prescription medications.

But for the for-profit pharmaceutical industry, said Mitchell, the ability of Medicare to negotiate lower prices would amount to “Armageddon.”

In a tweet Thursday, Mitchell countered the pharmaceutical industry’s attempt to tout successful vaccine development as an argument against government action to lower drug prices.

“Sorry PhRMA, drug corps didn’t make vaccines possible: taxpayers did,” he wrote. “The government spent billions on research pre-pandemic and $18 billion more on trials, production, and purchase. Drug corps are reaping record profits and execs are becoming billionaires. Thanks to us.”

Surprising? Not at all.

We won’t stop until Medicare can negotiate for #LowerDrugPricesNow.https://t.co/5sv0R9JkQG

A report released last week by the advocacy group Protect Our Care estimates that the pharmaceutical industry is currently financing at least eight ad campaigns attacking Democrats’ push to allow Medicare to negotiate drug prices, which it is currently barred from doing under federal law.

One campaign spotlighted in the report is the American Action Network’s (AAN) $5 million ad blitz falsely warning that the Medicare price-negotiation proposal is “a socialist prescription drug plan that would limit patients’ access to lifesaving medications.” Protect Our Care notes that AAN has received nearly $15 million from PhRMA between 2016 and 2019.

“Members of Congress can either vote with these drug companies or vote for reforms that lower the price of drugs for patients,” Leslie Dach, chair of Protect Our Care, said in a statement. “Lives are on the line.”

According to Patients for Affordable Drugs, Big Pharma-backed groups have spent more than $18 million this year on advertisements against proposed reforms aimed at lowering prescription medicine prices. Patients for Affordable Drugs released a document last week refuting some of the pharmaceutical industry’s arguments against Medicare negotiation.

“Big Pharma will stop at nothing to maintain its unfettered pricing power at the expense of patients who are struggling to afford their prescription drugs,” said Mitchell. “The industry is doing what it has done for decades — using front groups to push lies and misleading claims to scare patients and lawmakers from passing any drug pricing reform into law. This time, patients and elected officials aren’t buying the lies, and we are not going to let them get away with it.”

Aggressive lobbying from the pharmaceutical industry and other powerful healthcare interest groups comes as House and Senate Democrats are racing to assemble a multitrillion-dollar reconciliation package covering an array of priorities, from climate action to paid family leave to Medicare expansion.

With conservative Democrats such as Sen. Joe Manchin (D-W.Va.) and Kyrsten Sinema (D-Ariz.) threatening to oppose the $3.5 trillion price tag agreed upon by the party’s leadership, the rest of the Democratic caucus and Biden are facing pressure from grassroots groups to hold their ground and ensure that drug-cost reforms remain in the final reconciliation package.

“This is a once-in-a-generation opportunity for Congress and President Biden to keep their promise to lower costs and improve healthcare for families and seniors,” Margarida Jorge, campaign director for Lower Drug Prices Now, said in a statement. “We can’t Build Back Better without affordable prescription medicines for everyone who needs them.”

“By giving Medicare the power to negotiate, capping out-of-pocket costs for beneficiaries, and holding drug corporations accountable for price-gouging, we can ensure that no American gets priced-out of access to life-saving medications,” Jorge added. “By delivering on these promises, Democrats can take a major step forward in ending Big Pharma’s monopoly control over drug pricing and finally put patients before profit.”