Investigative journalist Paul D. Thacker won a prestigious British Journalism Award for a series of articles he wrote in The BMJ exposing the lack of transparency among experts advising the UK and U.S. governments on COVID policy and practice. 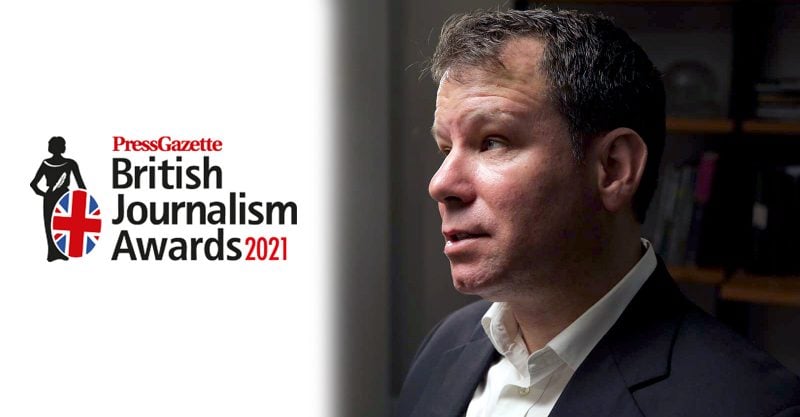 The investigative journalist Paul D. Thacker has won a prestigious British Journalism Award for a series of articles he wrote in The BMJ, one of the world’s top general medical journals.

The awards aim to recognize great journalism that is revelatory while serving the public interest.

The three articles that won Thacker the Specialist Journalism 2021 award expose the lack of transparency among experts advising the UK and U.S. governments on COVID policy and practice.

Exposing the veiled vested interests and corporate disinformation that distort scientific debate is the key recurring theme in Thacker’s work, and he doesn’t hesitate to call out not just conflicted experts but even fellow journalists, when he thinks their coverage is being shaped by corrupt influences.

Though now based in Madrid, Thacker is an American who honed his sleuthing skills during a spell as a congressional investigator for the U.S. Senate Finance Committee, when he probed corruption and scientific integrity in academia, corporations and federal agencies.

According to a fascinating profile in the journal Nature, the revelations that resulted from Thacker’s investigations “disrupted the careers of several top researchers with lucrative industry ties” and the “ensuing negative publicity” had “profound effects on U.S. universities and biomedical scientists.”

In fact, Thacker’s headline-grabbing exposés of undisclosed payments directly led to the Sunshine Act, a U.S. healthcare law to increase transparency around the financial relationships between the pharmaceutical giants and medical professionals.

And Thacker is a vigorous defender of transparency and the freedom of information laws of which he’s made such effective use.

GMWatch readers will know his work primarily from his pieces on pro-GMO activists like Kevin Folta, Mark Lynas, Keith Kloor and Stephan Neidenbach.

During the last year, he’s also begun reporting heavily on another topic of interest to many of our readers — the distortions in the media’s coverage of the lab leak hypothesis on SARS-CoV-2.

Thacker’s unflinching reporting and dogged pursuit of his targets, even on social media, at times generates not just concern but outright fear and loathing.

A science journalist told Nature, “My God, I hope I’m never on the other end of his gun,” and those desperate to negate his impact have often resorted to full-on character assassination.

Thacker has been accused of “lies” and “slander” (Kevin Folta) and “scurrilous attacks” (Tamar Haspel), as well as being labeled a “bad actor” (Mary Mangan), a “science denier” (Hank Campbell), a “former journalist” (Keith Kloor), a “discredited journalist” (ACSH), a “malevolent troll” (Alex Berezow), a “sadistic troll” (Keith Kloor), a “constant conspiracy theorist” (Mary Mangan), an “evil character” (Kevin Folta) and even “a monster and a criminal” and “an incorrigible rat” (Marc Brazeau).

One notorious (and genuine!) troll, Stephan Neidenbach — was so unnerved by Thacker’s investigations into his antics that he somewhat hilariously tried to get a Maryland court to issue a restraining order.

With the court initially closed, Neidenbach was able to get an “interim peace order” granted, but it only lasted until the court was back in session and could examine Neidenbach’s actual evidence.

Having failed to cancel Thacker, Neidenbach then fled social media.

The resulting piece on Neidenbach’s years of “haranguing professors and journalists, comparing them to Hitler, harassing their editors and employers” etc., was published on Thacker’s Disinformation Chronicle substack, which is well worth subscribing to for its free weekly newsletters.

Although only launched at the beginning of this year, its archive is already full of highly readable and revealing reports and interviews, including:

His recent award — the latest acknowledgment of Thacker’s journalistic prowess — will stick in the craw of many of his targets.

After all, their lurid attacks on his reporting are hardly helped by praise from his peers for his “expertly researched and written journalism,” or his gaining an award given “for work which displays journalistic skill and rigour.”

Unlike Thacker, too many science journalists seek prestige and awards by conveying to the public the wisdom of the “experts,” or other influential players, while dismissing anyone raising questions about the science or technology in question.

But Thacker holds such “scicomm warriors” in contempt and is prepared to go wherever his investigations take him, even if it means stepping on the toes of big players or raising issues considered taboo.

As a PBS profile of Thacker reported: “When scientific studies are released, most lay people take the word of the ‘experts’ for granted and assume that the supporting data is legitimate.

It’s no surprise that Thacker once got fired for “insubordination” (for writing a story that eventually led to the movie “Dark Waters”), but he keeps reporting, keeps publishing amazing stories and even wins prestigious awards.