Vox journalist Laura Bult traveled to North Carolina to better understand the human health and environmental impact of the state’s massive pig farms, each of which house tens of thousands of hogs and produce an estimated 10,000 gallons of waste per day. 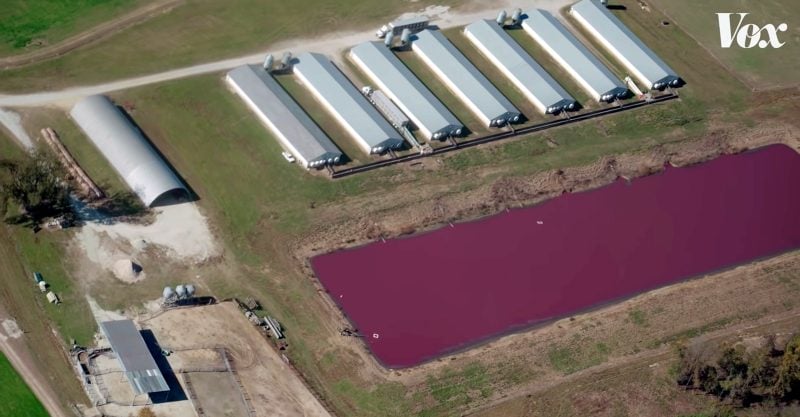 Massive amounts of pig poop produced by factory farms in North Carolina are wreaking havoc on the health of people and the environment.

A new video — the third episode in a series produced by the Vox Future Perfect Team — explores the public health impact of industrialized hog farming in North Carolina.

North Carolina is the third-largest hog-producing state in the U.S. It’s home to an estimated 2,000 large-scale hog farms, each of which houses tens of thousands of pigs.

Locals told Vox Producer Laura Bult the best way to understand the impact of the state’s industrialized pig farms is from the air. So they hopped into a plane and flew from New Bern to Duplin County, which has the highest concentration of hog farms.

“They have more hogs than they do people,” said Larry Baldwin of Waterkeeper Alliance, a nonprofit working to protect everyone’s right to clean water.

“I call it a ‘cesspool,’” said Baldwin. “It’s holding nothing but hog feces and urine.”

The massive amount of waste produced by factory farms is pumped into lagoons and siphoned into large sprinklers that spray the waste onto nearby farmland.

Spraying pig poop onto farmland pollutes the air, as it releases hundreds of compounds into the air such as methane, carbon dioxide, ammonia and hydrogen sulfide. Breathing these compounds can cause asthma, headaches, nausea and respiratory problems.

“Historically, and on small farms today,” said Bult, “pigs graze on pasture.” But with industrialized agriculture, large numbers of animals are raised indoors, confined in small spaces and without access to sunlight, she explained.

The practice is inhumane to the animals and problematic for the environment and surrounding communities.