Several new government- and industry-funded studies are underway to develop mRNA vaccines for livestock, but “we need to be sure that no abnormal cellular or molecular changes to the animal could be induced by this type of vaccine,” one scientist told The Defender. 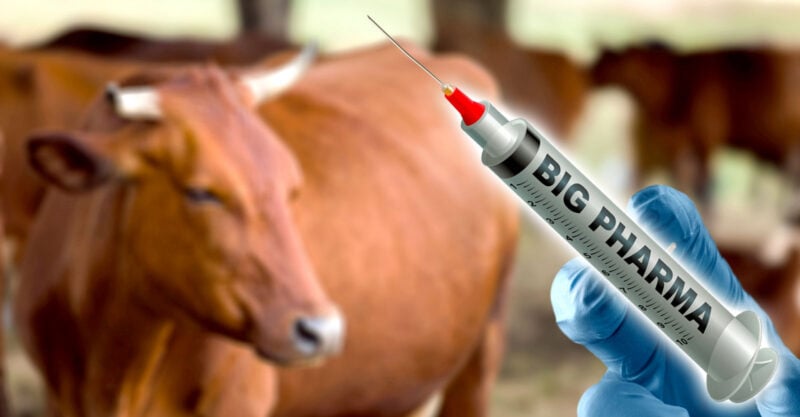 Several new government- and industry-funded studies are underway to develop mRNA vaccines for livestock, part of the massive expansion of the animal vaccine industry projected to be worth $26.12 billion by 2030.

Pharmaceutical company Zoetis developed an mRNA COVID-19 vaccine for animals that was administered to animals at zoos throughout the country.

“Third generation vaccines,” including DNA, RNA and recombinant viral vector vaccines, are not only administered to livestock — but they also are being developed for companion animals and wild animals.

A peer-reviewed study in the journal Viruses last year reported, “The successful application of mRNA vaccines against COVID-19 has further validated the platform and opened the floodgates to mRNA vaccine’s potential in infectious disease prevention, especially in the veterinary field.”

“I have now written to vaccine manufacturers to take up my challenge to develop both vaccines ready for use and manufacture in NSW by August 1 next year.

“COVID-19 demonstrated to us that all possible avenues in developing vaccines must be explored and we will leave no stone unturned.”

Dugald Saunders, NSW minister for agriculture, emphasized how important it was to “protect [NSW’s] livestock sector” and said the agreement with Tiba Biotech to create mRNA vaccines, “would be a game-changer for the industry.”

“Not enough is known at this time if mRNA vaccines can generate any long-term effects on reproduction or lifespan of domestic farm stock.

“As livestock become part of the human and animal food chain, we need to be sure that no abnormal cellular or molecular changes to the animal could be induced by this type of vaccine.”

According to a report published last year by Grand View Research, the market for animal vaccines is expected to grow at a 9.3% compounded annual growth rate, because “the growing incidence of food-borne zoonotic diseases and increasing animal husbandry are boosting the demand for vaccines.”

A recent white paper, “The Future of Livestock Vaccines,” by researchers at the Livestock Research Innovation Corporation, Ontario, Canada, summed up the shift in thinking about animal vaccines:

“New technologies (e.g. mRNA, artificial intelligence) will have dramatic impact on the availability and effectiveness of vaccines available to producers. …

“The current COVID-19 pandemic has taught us many lessons, including the fact that the development, mass production and approval process of vaccines could be shortened from several years (or decades) to 8-9 months.”

Iowa State teams up with Merck — with help from the U.S. government

Their joint research project to develop mRNA vaccine technology to prevent bovine RSV, as stated above, is funded in part by the U.S. government.

The study aims to develop a novel mRNA platform that is cost-efficient and thermostable in order to “open the door for vaccinating production animals with this technology.”

The project seeks to develop the platform for a bovine RSV vaccine “as a proof of principle for development of vaccines against this pathogen but also as a platform technology for other vaccines as well.”

The technology consists of creating electronic gene sequences for a given disease, synthesizing them into RNA, inserting them into the platform and injecting them into the animal. The RNA provides instructions to the immune cells to translate the sequence into proteins, which act as antigens.

Gates Foundation among funders of vaccines for livestock

After years of growing public concern about the use of antibiotics in meat production — particularly for the antibiotic residues they leave and their role in the development of drug-resistant “superbugs” — the World Health Organization in 2017 developed a set of guidelines and best practices on the use of medically important antimicrobials in animals raised for food.

That same year, the U.S. Food and Drug Administration (FDA) began regulatory measures to prevent the use of livestock antibiotics for growth purposes and required farmers who wanted to use antibiotics to get them from veterinarians.

The FDA finalized that guidance in 2021.

In an effort to reduce the use of publicly spurned antibiotics and to deal with the problem of viral infections common in industrial livestock production, meat producers turned to vaccines.

“Vaccines and other alternative products can help minimize the need for antibiotics by preventing and controlling infectious diseases in animal populations, and are central to the future success of animal agriculture,” according to a 2018 article in Veterinary Research.

Animal vaccines commonly require a lower level of scrutiny than vaccines for humans.

According to a 2016 Bloomberg report, industry leaders like Elanco, Eli Lilly, Merck Animal Health and Zoetis began shifting billions of dollars of research investments from antibiotics to vaccines in advance of the 2017 FDA regulatory measures.

Experts predicted the new regulations would cause the market for vaccines to explode.

“The future of our company is heavily grounded in vaccine development,” Dr. Rick Sibbel, a veterinarian who ran Merck’s technical services for cattle, poultry and swine, told Bloomberg.

The U.K.’s Department for International Development partnered with the Bill & Melinda Gates Foundation to fund livestock vaccines around the world, the department tweeted in 2018:

Bill Gates explains why #UKaid is partnering with @GatesFoundation to fund groundbreaking research to protect agriculture and farmers from around the world against devastating diseases #AidWorks pic.twitter.com/NIuI75cnkE

That partnership included a $40 million grant in 2017 to develop new livestock vaccines. Gates Foundation funding to CGIAR, “global research partnership for a food-secure future dedicated to transforming food, land, and water systems in a climate crisis,” continues to focus on shifting livestock producers from using antibiotics to vaccines.